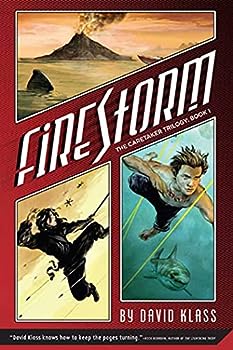 (Book #1 in the The Caretaker Trilogy Series)

This description may be from another edition of this product. His mother is not his mother. His father is not his father. But if Jack hadn't broken the high school rushing record that night, he never would have known and nothing would have changed. He'd just be...

Published by Thriftbooks.com User , 14 years ago
I bought this for a girl who doesn't read as often as she should and she couldn't put it down. She has already asked me about the next book in the trilogy.

Published by Thriftbooks.com User , 14 years ago
my uncle got this book for me for christmas and i judged it by its cover and i thought man this book isnt going to be the greatest. but i was on a long car ride and i started to read it. i was hooked after the first chapter. i couldnt put down the book. i finished it in a day. it jumps right into action and it takes the reader for a wild ride. i cant wait for the next two books to see what jack does next

Published by Thriftbooks.com User , 15 years ago
David Klass' FIRESTORM is Book 1 in the 'Caretaker Trilogy' and tells of a boy who breaks a high school record, gets in the news - and finds himself on a strange journey through space and time as a result of his talents and heritage. Jack lives in a dangerous world which is dying, and his powers may be the only thing standing between survival and disaster in this fine introductory story of change.

Published by Thriftbooks.com User , 15 years ago
It's been thirty years since I was a teenager, but this book really impressed me both as entertainment and moral guidance. There is plenty of action and excitement. Klass explores the raging hormones, longing for love and understanding, desire to understand the adult world and accept its burdens, and the wonderful newness of being a young man. He is not afraid of emotions, as boys have them too. A wonderful plus is the time travel dimension and the thread of environmentalism that runs through the story in a very fact-based fashion. I have read a great deal about the challenges we face in preserving earth's biological systems in the next hundred years, and Klass definitely neither exaggerates nor sugar-coats any of this as he weaves it into his plot. I cannot wait for volume two, though it simply can't be better than the first volume. Please hand a copy to a 15 or 16 year old- boys best, but good for girls too.

Published by Thriftbooks.com User , 15 years ago
It's always interesting to read the blurbs on the front of a book. You know the ones I mean; the recommendations from fellow authors about why you should pick up a copy of the book in question. What's even more interesting is when the blurb comes from someone other than an author. In the case of FIRESTORM, the first in The Caretaker Trilogy by author David Klass, the recommendation comes from Greenpeace. Yes, the same Greenpeace International that is dedicated to protecting and saving the Earth from the harmful practices that threaten to destroy it. If that isn't enough to get your attention, then maybe you should turn your ear towards Jack Danielson, the hero of FIRESTORM: "Name's Jack Danielson. Eighteen. As of right now, not quite sure I'll live to see nineteen. Always been a pretty good guy, easy-going, laid back, friend to all and enemy to none. Smart, but not too smart. Athletically inclined, but never enough to be the best. Now my whole world is falling apart. Seems my father isn't my father. My mother isn't my mother. The fact that my dad who isn't my dad shot off his own foot to prove his point should be strange enough. It isn't. There are weird bat-like creatures chasing me, and things called Gorms. I've somehow ended up on a motorcycle with a humongous mongrel dog named Gisco, who happens to be telepathic, riding in a sidecar. Now there's a woman named Eko kicking my a** on a daily basis to make me stronger. Why? Because I have to find Firestorm so that I can save the Earth. And no, I have no idea what that is. And yes, I'm a fan of sentence fragments. Look it up, my friend, but not right now. Right now I have to save the world, before there's no future on Earth for me to come back from." FIRESTORM is Jack's story, but it's also the story of what could very well happen. It's a fantasy that could be truth, if the destruction of Earth by mankind continues on its current course. After reading this wonderful book, I clearly understand why it's endorsed by Greenpeace. One of the best things of the book, besides its underlying message of taking care of the planet, is Gisco, the telepathic dog. He adds an element of humor, such as his devotion to the O Great Dog God, that lightens up a story that could come across as preachy, but never does. It's very hard to categorize FIRESTORM into one category, but if I had to I would call it a coming-of-age, contemporary fantasy, science-fiction, paranormal adventure story. If that doesn't catch your attention, I don't know what will. Let me just say that once you start reading, you won't be able to stop. And when you're finished, you'll want to read more. FIRESTORM is, luckily, the first book in The Caretaker Trilogy, so maybe if we hound Mr. Klass night and day he'll give us what we want--and sooner rather than later.
Copyright © 2020 Thriftbooks.com Terms of Use | Privacy Policy | Do Not Sell My Personal Information | Accessibility Statement
ThriftBooks® and the ThriftBooks® logo are registered trademarks of Thrift Books Global, LLC