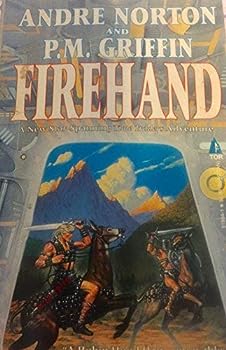 by P.M. Griffin and Andre Norton

Norton, one of the most distinguished living SF and fantasy writers (Booklist) returns to the series where time is a battleground. Criminal Ross Murdoch is caught in a timeless conflict, in which he... This description may be from another edition of this product.

The best of the new Time Traders

Published by Thriftbooks.com User , 12 years ago
This is the best of the new Time Trader stories. Very good plot and characters. As good as any of Norton's earlier works.

A Rescue in Time

Published by Thriftbooks.com User , 13 years ago
Firehand (1994) is the fifth SF novel in the Time Traders series, following Key Out of Time. In the previous volume, Ross Murdock, Gordon Ashe and Karara Trehern drove the Baldies off Hawaika. In the process, Karara gained some Foanna talents. Still, they and the dolphins were stranded in the past after the battle. In this novel, Eveleen Riordan is sent into the past to fetch Ross and Gordon back to their own time. The Project already knows that Karara and the dolphins will be staying in the past. In fact, Karara has written a masterpiece about the battle and the eviction of the Baldies. Ross and Gordon return with Eveleen and are taken to the Dominion of the Sun-Star Virgin. At least to the system where it had existed. The Dominion population had disappeared at the same time that the people of Hawaika had appeared. For some reasons, the actions of the Time Agents on Hawaika had also disrupted the Dominion. The Dominionites appeared to be humans, maybe transported to the Dominion by some other aliens. They were less bellicose than Terrans and had developed starflight on their own. They had also developed a means of navigating their ships without voyage tapes. Furthermore, they had defeated a Baldie invasion of their system by a form of mind power. Now their home planet is burnt to a cinder. In this story, the Baldies contact Zanthor I Yoroc, Ton of Condor Hall. They offer gold to support his efforts to conquer the island. Zanthor had already been thinking of taking a neighboring domain from a weak lord. Despite the Baldies destruction of the minds of his guards, he agrees and returns to his hold with only his son Talroc I Zanthor. Ross, Gordon and Eveleen travel back to the crucial period in the Dominion past. Gordon poses as a native physician while Ross and Eveleen are disguised as mercenary guards. They pass on the news of the coming invasion by Ton Zanthor. In Saphirehold, they also convince the Ton to try a new tactic: guerrilla warfare. Zanthor conquers or intimidates all northern domains and prepares to take the Corridor, the only pass through the mountains suitable for large forces. He hires mercenaries to invade the south. Then he takes them toward Saphirehold. But the Saphirehold contingent uses unconventional tactics to hold back the forces of Condor Hall until the winter weather precludes further warfare. The southern domains now have time to prepare for his coming. They hold the Condor Hall forces slightly south of the Corridor. Meanwhile, the Saphirehold forces -- under the command of Ross -- are raiding the supply lines. Their raids force Zanthor to retain some of his forces to guard the convoys and patrol the pass. The guerrillas send part of their booty to the southern alliance to remind them of Saphirehold's contribution to the war. This tale reduces the invasion into a static conflict and finally into a losing proposition for Zanthor. No matter what he tries, the Saphireholders ambush sufficie

return of Ross Murdock and the Time Traders

Published by Thriftbooks.com User , 15 years ago
This book was written many years after the first four of the Time Traders books (Time Traders, Galactic Derelect, Defiant Agents and Key Out of Time.) This tells about the "return" of Murdock and Ash to modern day Earth after they had thought that they were trapped on the world of Hawaiiki by the destruction of their time gate. It was fairly good, but frankly, I didn't like the "love interest" thrown in. Sorry, but I LIKED my loner Murdock and wasn't happy to see him letting down his walls the way he did. On the other hand, Evie (called several different names in the book, depending on if she was undercover in time or not) was a fairly good match for him, being almost as big a loner as he was. Again, they are battling to save a world from the Baldies (the resident alien bad guys) and this tells the story of that attempt.

Published by Thriftbooks.com User , 22 years ago
I picked up this book at a resellers shop with no cover on it or any idea what it was about.(It is hardback,not stolen).Norton is great and she doesn't let you down here.Smooth writing and great characters who you feel you know by the end of the book.My only complaint is that the book is fairly short and therefore not a terribly engrossing novel.Try it,you might be surprised as pleasantly as I was.

Published by Thriftbooks.com User , 24 years ago
This is a fun book. One in a series that you just know she had fun writing! If you haven't read any of this series, this is an excellent place to start. I read my copy often.
Trustpilot
Copyright © 2022 Thriftbooks.com Terms of Use | Privacy Policy | Do Not Sell My Personal Information | Accessibility Statement
ThriftBooks® and the ThriftBooks® logo are registered trademarks of Thrift Books Global, LLC