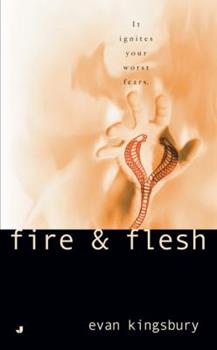 BURN It looks like a case of spontaneous human combustion. But it is only the beginning of an inexplicable death scourge that fills the air of a record-breaking heat wave with the smell of burning flesh. BABY As the temperature rises, so does the chaos. Preachers of doom are predicting Armageddon, but what's really happening is far more frightening than the rapture. BURN! A force beyond all human control is creating a hell on earth.

He has dipped his pen in the darkest depth of our fears !

Published by Thriftbooks.com User , 17 years ago
The title, FIRE & FLESH, does not do justice to this work of incendiary horror. The cover should carry warning labels: - DANGER: ONCE OPENED,CAN NOT BE CLOSED! - DO NOT READ THIS IF YOU WANT TO SLEEP TONIGHT! - WARNING! THIS WILL HAUNT YOU FOR WEEKS! The story opens in Calcutta, in streets so alive and so viscerally real that one tends to cross over from the imagined world on the page. Few works ever capture me like this. The story moves to Miami, another place of unrelenting heat. I lived there for seven years and I can still feel the steering wheel of my car sear my hands in the parking lot. Well, from steamy Calcutta to searing Miami, this story burns, burns, burns! Evan Kingsbury is Robert Walker, the author of the INSTINCT and the EDGE series. A sure hand, he has dipped his pen in the darkest depth of our fears in FIRE & FLESH !

Published by Thriftbooks.com User , 19 years ago
On a steaming hot day in Calcutta, India, a young girl dies. Her father, a local scientist forges a bond with a local pier burner to have her body incinerated. After the deal is completed, and as the man is exiting, a fellow Indain man comes up to him. He tells him that he will make a fantast for him beyond his wildest dreams. The man then turns into a snake like creature and burns the man to stone.Three months later, during the heat of a Miami summer, a doctor is found dead inside her car with her insides turned to flame. As the days pass, the body count rises. When snake scales are found at one of the crime scenes, Detective Eric and Angelica Hunter find that they are dealing with more than a psycho pyro. It turns out that a serpent god with a power greater than you can ever imagine is rising to take over the world with the help of his host body. And, as Brannon and Hunter later find out, it grows with the feeding of human souls. As the tension grows, so does the action as two law enforcement officers struggle to save the world as we know it.Full of suspense and action, FIRE AND FLESH is a superior by a new and gifted author. Think the movie, THE MUMMY only with snakes with Detective Richard Jury as Eric Brannon and Medical Examiner Kay Scarpetta as Angelica Hunter. The book is positioned to fly off the shelves and be enjoyed by fans of Koontz and King.

Robert W. Walker does it again...

Published by Thriftbooks.com User , 19 years ago
Evan Kingsbury is a pen name for bestselling author Robert Walker (author of the Instinct series with FBI agent Jessica Coran-- UNNATURAL INSTINCT is the latest).Walker is known for his visceral, pull-no-punches style, and this book is no exeption. It delivers the goods! There's more horror, violence, and evil in this one than in Stephen King's last three books combined. I recommend FIRE & FLESH to anyone who enjoys solid, fast paced thrillers. The setting is well drawn and pulls you in, the creature is scary and fascinating, and I look forward to Evan's (Robert's) next effort.One helluva ride, baby!

Published by Thriftbooks.com User , 19 years ago
FIRE & FLESH BY EVAN KINGSBURY is so hot they ought to have sold fire extin & uishers with it, or at least placed a "surgeon general's warning" on the cover, as it is heart-racingly FAST and mesmerizing, so much so I almost had a coronary when reading it on the bus and missing my stop. I took the rest of the day off and finished the book. The creature "smokes people" instaed of camels! Set in India in the opening pages, he/it/whatever the creature is--a mythological snakegod couched securely in the abdomen of not one but two men--seeks atachment, and to this end it travels to Miami where it enjoys an ungodly killing spree amid a godawful heatwave of record breaking temperatures that makes it right at home (like old India week). As it seeks out its "brother snake" --living large as Miami's Chief Medical Examiner, it "smokes" people to both sustain itself and to "learn more" in its quest to "join" with its fleeing other half-self. The story soon develops into one big long, bizzaro chase through hospital corridors, morgues, elevator shafts, parking garages, grocery store freezer units, Miami streets, the Florida Keys,The Everglades, and I won't give away where the chase finally takes us in this breath-taking roller-coaster ride of chaos of carefully constructed point-counterpoint in what at times feels like a "symphony" of terror in which you just know everyone on Earth is doomed but saved, doomed but saved again in repeated cycle. My point is, it's so RARE to find a horror title that doesn't disappoint, that does not resort to alien abductions, governmental conspiracies, black opps. and bald-faced coincidence atop coincidence--a story that doesn't fail the expectations set up in the opening, a story that doesn't fall apart or come apart at the poorly constructed seams we too often find in horror literature. And mark my word, this book, Fire & Flehs by Kingsbury (on the shelf between King and Koontz) is so well written that you can call it "literature" in the true sense of the word, in the tradtion of the best horror writers and some of the early works of Dean Koontz (as in Whispers and Phantoms) or early works of Stephen King (as in Salem's Lot and The Shinning). At the same time it is as fast-paced as an ALIEN film or the Terminator films. I thoroughly enjoyed it and thoroughly recommend it without a single reservation.

Published by Thriftbooks.com User , 19 years ago
This book reads like a Terminator film and takes place in India in its opening chapters with an eloquently horrific and heart rending beginning. But the incredibly fresh "hot" and unique villain/creature--a symbiosis of man and beast within, host and hostess, you might say (extremely sexual)is this "wanna-be" snake diety coiled in the India native's abdomen--in its obsessive search for its brother snake and its human host lands in a Miami, Florida heatwave and is right at home. During its search, it must feed, and it does so by "smoking" humans and brething their smutty elements into its nostrils, and when the victims of "spontaneous human combustion" begin to accumulate and can no longer be ignored, all hell breaks loose in this break-neck but literary gem of a story. Miami, unlike India, is going to investigate sudden fire deaths, and soon firemen, police, and medical professional are overwhelmed. Kingsbury's creature is a rare breed in its uniqueness, and we all know how hard it is to find a horror novel with something new to say, but Kingsbury's leading the way back to originality and spirit in the horror novel. While it moves with such a forward dynamo that it may as well be a laser knife that author Evan Kingsbury is using for a pen, an his eloquent style and masterful sentencing is pure craft--harkening back to an era when craft in writing meant something, paying unintentional but clear homage to Poe, Lovecraft et.al while also blending in the tradition of the great modern masters of suspenseful horror: Rober Bloch and a touch of Richard Matheson--the emperors of horror writing. Great read and a class act--first rate, worthy of the bestseller list, it would curl Stephen King's hair. Careful Dean Koontz, this guy's on your heels!
Trustpilot
Copyright © 2022 Thriftbooks.com Terms of Use | Privacy Policy | Do Not Sell My Personal Information | Accessibility Statement
ThriftBooks® and the ThriftBooks® logo are registered trademarks of Thrift Books Global, LLC