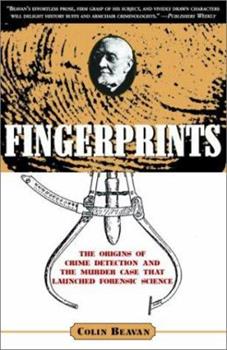 Fingerprints: The Origins of Crime Detection and the Murder Case That Launched Forensic Science

It is almost impossible to imagine that prior to the 20th century, there was no reliable way to distinguish between the guilty and the innocent. All that changed in Britain in 1905, when the bloody bodies of an elderly couple were discovered in their shop -- and a solitary fingerprint became the only piece of evidence...

Published by Thriftbooks.com User , 21 years ago
Perhaps the most startling thing we learn in this terrific book by Colin Beavan is that fingerprint identification was not originally developed in order to figure out who had committed crimes, but to help police figure out who they had actually arrested. Seems that in the 19th Century, criminals would routinely avoid the stiffer penalties for repeat offenders by simply lying about who they were. Their deceptions were only exposed if beat cops, specifically stationed in courtrooms and jailhouses for the purpose, happened to recognize them and expose their real identities. It's details like this, and the fascinating ways in which developing ideas about penology intertwined with modern forensic techniques that really lift this book a cut above most true crime fodder.In addition, Beavan is able to draw upon a cast of characters--seemingly out of Dickens or Wilkie Collins or even Sherlock Holmes--and a wide array of dramatic situations--bureaucratic infighting, gruesome murders, a tragic case of mistaken identity and false imprisonment, academic fraud and courtroom drama--to keep the story humming along like a good Victorian thriller. At the center of the story is Dr. Henry Faulds, who did more than any other man to develop and proselytize for fingerprinting, but who was cheated out of the glory for this innovation by Francis Galton, a cousin of Darwin, who was born to the manor and felt no compunction about claiming credit for the good work of "lesser" men. And the whole story is framed by a "shocking tragedy at Deptford," a 1905 robbery and double-murder in which the only piece of evidence was a single bloody fingerprint found on a cashbox at the scene.Colin Beavan, who has previously written for magazines like Esquire and Atlantic Monthly, handles the wide cast of characters deftly and explains the underlying science clearly. There are also numerous helpful illustrations and a pretty good website companion to the book (http://www.fingerprintbook.com/). The book is being marketed as similar to Longitude and The Professor and the Madman, and though that is high company, it's entirely worthy of the comparison.GRADE : A

Putting Their Fingers On It

Published by Thriftbooks.com User , 21 years ago
We are used to fingerprints as forensic evidence these days, but fingerprints have only been accepted for legal identification and detection for less than a century. In the prosecution of a particularly brutal murder in 1905, Scotland Yard introduced fingerprints to the courtroom, after decades of rejecting their use. The history of early fingerprinting makes surprisingly good reading in _Fingerprints: The Origins of Crime Detection and the Murder Case that Launched Forensic Science_ (Hyperion) by Colin Beavan.The horrid murder serves as introduction to the book, and its resolution by fingerprint is the climax. In between is a fascinating story that involves legal philosophy as well as science and history. For instance, throughout most legal history, the only evidence allowed in court was eyewitness testimony; even now, the words of an eyewitness are thought by the public to be especially weighty, although it has become clear especially in the last decades that memories are malleable and that eyewitness testimony is often worse than useless. Physical evidence was held to be too likely to be manipulated; juries relied on hearing what people remembered seeing with their own eyes rather than what experts said they could deduce by objective methods. Science had wrought the changes of the industrial revolution, but had not touched the judiciary. There was a system that had been invented by a Frenchman, Alphonse Bertillon, consisting of numerous, minute body measurements, such as finger and forearm lengths. This was the competition to fingerprinting, whose advantages were less obvious. A Scotland-born doctor, Henry Faulds, while in Japan as a missionary, noticed that there were finger impressions in ancient pottery, and began to study fingerprints as unique identifiers. It was he who discovered that fingerprints did not change as people aged, and that using sandpaper, razor, or acid to obliterate fingerprints made no difference, as when healed, the prints grew back exactly in the previous manner. Here was an easy way to identify people permanently. But Faulds was robbed of credit for his research, mostly by the brilliant snob Francis Galton. He died in 1930, still not even a footnote in the fingerprint story. This book corrects the oversight. _Fingerprints_ tells a good deal about the scientific infighting for credit for fingerprinting, and the process by which it became a forensic endeavor. It mentions a few modern aspects of the science, such as the new FBI computer that can compare 65 million fingerprint sets, and the new capacity to lift prints from paper or even human skin. Best of all, it uses several crime dramas from the turn of the last century to tell an engrossing story of how fingerprinting, in which no policeman had confidence, started on its way to becoming the most important police identification technique.

Published by Thriftbooks.com User , 21 years ago
Thoroughly researched and engagingly written, this book is sure to appeal to people in the fingerprint profession, and to those who love history. The book centers around "The Shocking Tragedy at Deptford", the murder case which became the first in the United Kingdom which was solved through the use of fingerprint evidence. (There were earlier cases in other countries, and an account of one from Argentina is also included in the text). After an account of the crime, the investigation and the suspects arrest, the author moves back in time to give an overview of the early criminal justice system. Identification of criminals was a problem, particularly attempting to identify repeat offenders. The author includes an account of the work done by the early pioneers in identification, including the struggle among them over who should get credit for the discovery of fingerprints. Some readers found this part of the book less interesting, but I was fascinated. The people who historically have been given credit for the origination of fingerprint identification, don't necessarily deserve it.He then returns to the crime and gives an account of the trial. Fingerprints are now the most widely accepted proof of identity, but at that time the courts had not had this sort of evidence presented to them, so it was not an open and shut case by any means.Colleagues of mine who are fingerprint examiners both enjoyed the book very much. They commented that, "It really shows that he's done his homework", and that "everyone should enjoy it". I'd have to agree, this is quite simply the best book that I've read on the history of fingerprint identification.Daryl W. Clemens, Editor, crimeandclues.com.

A wild ride through the history of forensic science !!!

Published by Thriftbooks.com User , 21 years ago
No joke, this is one of the best books I have ever read. It is a facinating read for anyone who enjoys watching the History Channel, the Discovery Channel, and Unsolved Mysteries as much as I do. Ever want to go inside the mind of the person who came up with the idea of using fingerprints to find a killer? I know I have. And this book takes you there AND MORE ! Great stuff from an author with a great future

Couldn't Put It Down

Published by Thriftbooks.com User , 21 years ago
What an extraordinary tale. This riveting, superbly written, and meticulously-researched account of the birth of forensic science is a literary firecracker, filled with mystery, suspense, and a stunning and unexpected conclusion. The book centers on the first murder case to be solved with fingerprints, but in the process Beavan reveals the plight of Henry Faulds, the lowly, unknown scientist who discovered fingerprints and who was ultimately cheated out of the credit by the far more powerful, and socially superior Francis Galton, Darwin's cousin. Along the way we see the horrors of a criminal justice system that was based on fickle, eyewitness accounts instead of scientific fact. Before the advent of fingerprints, countless, misidentified innocents spent decades behind bars, while career criminals were set loose with the help of fake aliases. Peppered with lively details, such as the practice of cons cutting off their fingertips to avoid detection when the system was first introduced, the book is a must read for any lover of literary nonfiction.
Trustpilot
Copyright © 2022 Thriftbooks.com Terms of Use | Privacy Policy | Do Not Sell or Share My Personal Information | Accessibility Statement
ThriftBooks® and the ThriftBooks® logo are registered trademarks of Thrift Books Global, LLC