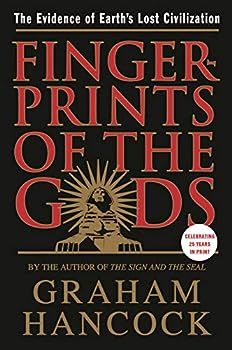 Fingerprints of the Gods: The Evidence of Earth's Lost Civilization

Could the story of mankind be far older than we have previously believed? Using tools as varied as archaeo-astronomy, geology, and computer analysis of ancient myths, Graham Hancock presents a... This description may be from another edition of this product.

Published by Thriftbooks.com User , 13 years ago
This a great book, lots of insight, lots of things to think about, very well done! Easy to read!

Too many anomalies that remain undiscussed by "experts"

Published by Thriftbooks.com User , 13 years ago
All information must be analyzed carefully to better ascertain accuracy, however, "'Egyptologists, said John West, 'are the last people in the world to address any anomaly.'" (Chapter 47, p.441) In addition, a concept that nicely sums up my feelings on the study of history as well, is stated by Professor Robert Schoch, a Boston University geologist, on page 447: " 'If my findings are in conflict with their [Egyptologists] theory about the rise of civilization then maybe its time for them to re-evaluate that theory.'" A fascinating and intriguing book that is as mentally stimulating and mind-bending as "The Atlantis Blueprint" by Wilson, C. and Flem-Ath, Rand

A Travel Journal Through Time

Published by Thriftbooks.com User , 15 years ago
According to Graham Hancock in his book, The Fingerprints Of The Gods, "The Egyptian god Thoth was said to have succeeded in understanding the mysteries of the heavens [and to have] revealed them by inscribing them in sacred books which he then hid here on earth, intending that they should be searched for by future generations but only found by the truly worthy..." (Page 495) For Hancock, the books of Thoth may not necessarily be physical books at all, but merely metaphors, and they are not just limited to Egypt. These "books" lie in the Egyptian pyramids and other buildings, in legends and myths gathered from all over the world, in old maps recently discovered, and in ancient Mayan calendar systems and structures. These buildings, systems, and myths point to an advanced culture that existed prior to our known and recorded history, before the last ice age, that left its mark on the world for future generations. The "truly worthy" that Thoth referred to would be a civilization like our own that has an advanced grasp of the sciences such as astronomy and mathematics. Such a civilization could decipher and understand what was left behind. Graham Hancock is a former correspondent for both The Economist and The London Sunday Times. He is also the author of the international best seller, Sign And The Seal, his own personal quest for the biblical Ark of the Covenant. In Fingerprints Of The Gods, Hancock lays out a vast array of evidence for a long lost, yet advanced civilization. He seems to gather this evidence as independent clues and draws reasonable suppositions as to what they might mean. For example, Hancock believes the advanced civilization that existed prior to our own was destroyed around the time of the flood as described in the Judeo-Christian bible. In addition to the flood of the bible, he compares similar flood stories from many different cultures such as those told by the Incas, the Mayans, the Sumerians, The Dakota Indians, the Greeks, and the Egyptians, to name only a few. Many of these cultures share common beliefs in their stories of a cataclysmic flood: The flood was caused by a god's displeasure with the human race. A person, or a very small group of people, received prior warning of the flood. A craft was constructed by these people in order to survive the flood. Animals and food were placed upon the craft in order to repopulate the world after the flood. These people sent out birds to find land after the rain had stopped. Eventually, the craft came to rest upon a mountain and the people on board eventually repopulated the earth. Hancock goes further than simply drawing comparisons from these flood stories from many different cultures. He includes archaeological and geological evidence as well, and eventually draws the conclusion that the stories of a cataclysm are real, and that mankind did somehow survive it. Additionally, he asserts that this pre-flood civilization was very advanced, and that the proof of this li

Published by Thriftbooks.com User , 19 years ago
Graham Hancock, a reporter for the Economist and Sunday London Times, has done what many of us only dream about, he visited the ruins of many ancient cultures from around the globe and came up with some startling findings and theories. His journeys included: Machu Picchu in Peru, the Mayan ruins of Central America and Mexico, the Aztec ruins near Mexico City, the city of Teotihuacan, and the Egyptian ruins of Giza, the Pyramids, Heliopolis, Saqqara, and Abydos. He begins the book with a chapter introducing us to an ancient map of Antartica, made in AD 1513. It is called the Piri Reis map drawn up in Constantinople. It is an enigma because the 'modern' world only "recently" discovered Antartica in AD 1818. Graham Hancock ends his book with more information and theories about the reason Antartica may have shifted about 2,000 miles south of its original location, believed to be a subtropical climate, similar to that of the Meditarranean. Antartica is believed to have been situated about 30 degrees north of its present position on the planet. The explanation for its movement is based on an idea endorsed by Albert Einstein who wrote of it in 1953 *before* the scientific community had yet formulated the continental drift theory or the earth-crust shift theory. Graham Hancock provides numerous references from science and archeology to support his theories and conclusions. Graham Hancock knows how to weave scientific facts and theories, ancient myths and legends, his own personal diary and the photographs his wife took ... into a seamless tapestry which divulges plausible explanations for the origins of the magnificent structures built by ancient civilizations. He is a phenomenal writer who knows how to build suspense and intrigue. He keeps the reader hanging on the edge of his or her seat, anticipating what "hidden" messages of the past will be revealed next. Most astonishing are his revelations of special numerical relationships which were built into the structures of the pyramids in Egypt and Teotihuacan. Most amazing also is the fact that these special numbers are mentioned in numerous myths and legends from different cultures around the world. Dr. Carl Gustav Jung might call it "synchronicity" but if he had read this book he would more than likely call it 'intention'. The author contends the builders of these monuments and structures were trying to leave us, the future generation of the human race ... a message. They did this through archeological, mathematical, and scientific evidence, along with information passed down in myths and legends. Once started, this book is difficult to put down. Although it is not easy reading, it keeps the reader totally engaged and hooked, right from the beginning. Graham Hancock manages to connect catastrophic global events of the past, which scientists agree occurred about 10,500 years ago B.C. to the ancient monuments and ruins that are still standing. There are predictions that similar catastrophic events may a

Science may not have all the answers

Published by Thriftbooks.com User , 23 years ago
This book presents very compelling circumstantial evidence for Earths ancient history. Graham Hancock & Robert Bauval have provided varying scenarios concerning; the building of the pyramids, ancient mapmakers representation of the earth and lost civilizations. They have woven the evidence together in such a way as to suggest our past is not as it is presented today, even going so far as to suggest who really built the pyramids and what really happened to Atlantis. This book makes you think about the immensity of our 'unknowledge' and the brevity of our own lives.
Trustpilot
Copyright © 2022 Thriftbooks.com Terms of Use | Privacy Policy | Do Not Sell My Personal Information | Cookie Preferences | Accessibility Statement
ThriftBooks® and the ThriftBooks® logo are registered trademarks of Thrift Books Global, LLC