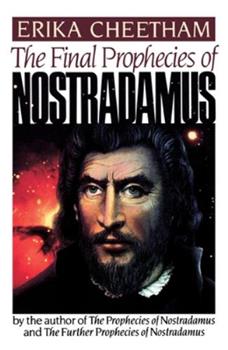 The Final Prophecies of Nostradamus

In this new volume, Cheetham presents fresh translations and scholarly interpretations of Nostradamus's last prophecies, focusing on new and startling predictions through the end of this millennium. This description may be from another edition of this product.

The author nailed it on the head!!

Published by Thriftbooks.com User , 17 years ago
This is the book to read when one who never heard of Nostradamus should get. Easy read and opened, honest opinions all stated in points (quatrains of Nostradamus) where the author was unable to explain (translate). The book starts off pointing to the life of Nostradamus who was a decendant of Jewish family. He, like everyone in a religious union during the 1500 period in Europe, had to escape the persecution of being what he later decided to devout to the Lord. This book should be followed up with a second volume to fill in those quatrains unexplained by the author as I would think that she's re-reading her translations and all the unexplained quatrains which now today she may have figured out. This is a fantastic read and very intriguing for sure. I like the mystical aurora it presents. From time to time, I would pick it up and find translations that has just come true or find some that are partially prophesized. However, the Bible is the source of all prophecies. And that really is coming to light today.

Easier to read than some other Nostradamus works

Published by Thriftbooks.com User , 23 years ago
This book was rated very highly by other readers and I'm sure it is a 5 star book, that's why I left it that way in my review. My problem with the book was that (for me) it was hard to understand. If I wanted to look at what's headed our way, I'm not sure where to look in the book. I've read before somewhere that in the seventh month of 1999 there will be two suns in the sky. I wanted to read more about that, yet I couldn't find it. Maybe I bought the wrong book. Anyways, I don't want to say that it's a bad book but for me, I'm just learning about Nostradamas, it was a bit confusing.

A Very Thorough Book on Nostradamus

Published by Thriftbooks.com User , 24 years ago
This is an excellent book on Nostradamus. It is very thorough with the Centuries; however, it does not contain the Preface nor the Epistle. Cheetham has very interesting interpretations, though she does claim to be perplexed by quite a few quatrains herself! I think that her interpretations are honest. This is a good work to compare with Hogue and Germine among others. If you want to hear what Nostradamus has to say, this is one conversation you don't want to miss.

Valuable reference book for the Millennium !

Published by Thriftbooks.com User , 25 years ago
Whether you believe in Nostradamus or not, this book is a great addition to any bookshelf. Nostradamus's original prophecies are contained in this book so it allows you make your own interpetations instead of relying on those kooky tabloids. Erika does a good job with her own interpetation of the prophecies but for us smart-alecs there is room for our own. You can't leave the 20th century without this.
Trustpilot
Copyright © 2022 Thriftbooks.com Terms of Use | Privacy Policy | Do Not Sell or Share My Personal Information | Accessibility Statement
ThriftBooks® and the ThriftBooks® logo are registered trademarks of Thrift Books Global, LLC