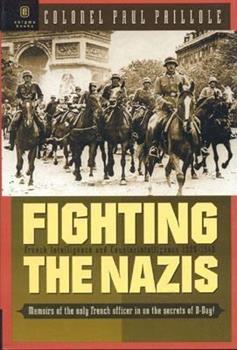 The author was a French Resistance staff officer in charge of counterespionage during the war. The book is filled with exciting and dangerous case stories against the Germans, who were occupying France, and against those French citizens who actively helped the enemy. And by the time France was liberated, Paillole was able to pinpoint the key individuals who had collaborated with the Nazis.

Published by Thriftbooks.com User , 18 years ago
Fighting The Nazis: Memoirs Of The Only French Officer In On The Secrets Of D-Day! is the military autobiography of Colonel Paul Paillole, a French officer who was privy to what was perhaps the most important operation in the European Theatre -- the D-Day invasion of Normandy by the Allies. Paillole provides the reader with a truly gripping look at the catastrophic events building up to, during, and after World War II. Fighting The Nazis is a straightforward and compelling presentation of the harsh realities of battle, bloodshed, surrender, challenge, and victory. An uncompromising and singularly recommended military memoir, Fighting The Nazis would be a prize addition to any personal, academic, or community library World War II Military History collection or reading list.
Trustpilot
Copyright © 2022 Thriftbooks.com Terms of Use | Privacy Policy | Do Not Sell My Personal Information | Accessibility Statement
ThriftBooks® and the ThriftBooks® logo are registered trademarks of Thrift Books Global, LLC