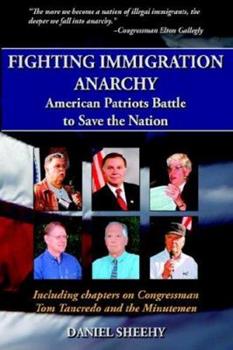 Fighting Immigration Anarchy: American Patriots Battle to Save the Nation

A groundswell has been steadily building in America among citizens who are fed up with seeing our country overrun by millions of illegal aliens - foreign invaders who defy our laws, disrespect our culture, and refuse to learn our language. These citizens became activists when they saw that, if America is to survive as a nation and culture, her people will have to save her, because an out-of-touch Washington establishment has grown too corrupt to defend...

Published by Thriftbooks.com User , 17 years ago
If you are an immigration reform activist or supporter, you must read this book. Dan Sheehy answers questions you did not even know you had about why things have gone so terrribly wrong. Once you start reading, you cannot put it down. The real-life true story of a handful of patriots who cared when few were even paying attention. This story is a blueprint for newcomers like myself to duplicate the successes and avoid the pitfalls outlined in this fascinating new book. If you are not an activist, don't read this book because you might wind up becoming one before you get half-way through.

As current as today's headlines

Published by Thriftbooks.com User , 17 years ago
The governors of New Mexico and Arizona have declared a state of emergency at their border because of illegal immigration. Sheehy's book will reveal the broader picture of demographic warfare being waged against the U.S. by Mexico - aided and abetted by both political parties in a destructive competition for cheap labor and cheap votes. It is not a pretty picture and will disturb the politically correct, but Sheehy's vignettes of these patriotic folks doing what their government is failing to do will provide encouragement to those depressed by what is happening.

"A Must Read For All Americans"

Published by Thriftbooks.com User , 17 years ago
This Book is a must read for all Americans who love their country. Not only is the book a modern "Profiles in Courage", it's bound to be a number "1" best seller! Read it and weep. I take that back, Read it and standup and do something about it!

Published by Thriftbooks.com User , 17 years ago
"`Where are the Americans?' I asked myself with dread when I realized that our government had let the illegal alien problem get away from them, maybe even helped create it. Dan Sheehy's book, Fighting Immigration Anarchy, is a witness to history, a tribute to those who foresaw the destruction in the making and fought like tigers - no, battled like Americans! - to stop the destruction of this nation. I have stood and fought with the great heroes in this book, and I am proud to call each one a friend."

Published by Thriftbooks.com User , 17 years ago
This book is fantastic! It is both easy to read and engrossing. I love to highlight interesting quotes, statistics and facts when reading but had to restrain myself or else the entire book would have been yellow! Mr. Sheehy weaves interesting stories together with the facts. I found myself saying, "Yes!" as his words expressed exactly what I've been thinking! Most everyone will enjoy this book but illegal immigration activists, in particular, must have a copy. This book tells you what the MSM won't. By the 4th chapter, you'll understand why the media and our very own government don't want you to understand the true agenda behind this invasion. By the last chapter, you may be so shocked that you feel compelled to join these heroes in Fighting Immigration Anarchy.
Trustpilot
Copyright © 2022 Thriftbooks.com Terms of Use | Privacy Policy | Do Not Sell My Personal Information | Cookie Preferences | Accessibility Statement
ThriftBooks® and the ThriftBooks® logo are registered trademarks of Thrift Books Global, LLC