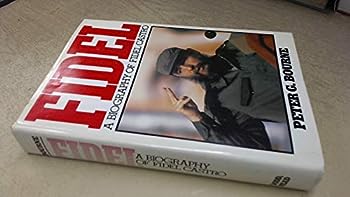 Fidel: A Biography of Fidel Castro

In addition to being a first-class chronological biography, provides insight into the Cuban leader's psyche, especially in regard to his lifelong identification with his father, the influence of his... This description may be from another edition of this product.

This book should be read by all those with an interest in peace.

Published by Thriftbooks.com User , 15 years ago
The very name of Fidel Castro brings to mind the threat of Communism and danger on the very doorstep of the United States. This single man has been a thorn in the side of every American President since Eisenhower. Jimmy Carter has described this book as a "fascinating biography of one of the 20th Century's most controversial men." And so it is. Cuba was once the playground of the American rich and elite. Since the revolution of 1959, however, Cuba has been seen as the enemy on America's doorstep. Indeed US citizens are actively discouraged from travelling to the country itself. It is not for me to expound the rights and wrongs of either the man himself or his regime - but, today, he grows increasingly old and frail and there will come a time for succession. By reading this book, coupled with an understanding of Cuba no longer being directly supported by the Soviet Union, the reader will obtain an understanding of what might follow the Castro years. Perhaps it is in the best interests of every American citizen to seek such an understanding. Dr Peter Bourne is a distinguished psychiatrist with an extensive career in politics and foreign affairs. A former Assistant Secretary-General of the UN, he also served under President Carter and later took up a senior research fellowship for Caribbean and Latin American Affairs. In short, this book is extremely well researched and well written by a man who knows his subject. NM British Army Major (Retired).
Trustpilot
Copyright © 2022 Thriftbooks.com Terms of Use | Privacy Policy | Do Not Sell My Personal Information | Cookie Preferences | Accessibility Statement
ThriftBooks® and the ThriftBooks® logo are registered trademarks of Thrift Books Global, LLC