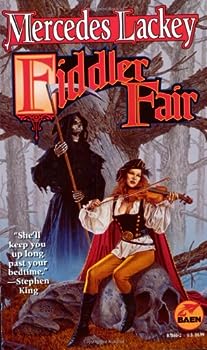 (Part of the Bardic Voices Series)

A collection of short stories is populated by such figures as dinosaur activists, an out-of-his-element Lawrence of Arabia, a modern-day King Arthur, and a Chevy-fascinated alien. This description may be from another edition of this product.

Published by Thriftbooks.com User , 19 years ago
The stories herein don't overlap OATHBLOOD or WEREHUNTER. Only the title story concerns the Free Bards (see below). For each story I've noted the anthology in which it originally appeared. "Aliens Ate My Pickup" (didn't appear in Esther Friesner's ALIEN PREGNANT BY ELVIS, so is the only story "original" to this collection). Written in 1st-person dialect by an Oklahoma native, we only see his responses to his questioner, not the questions themselves, and he continually strays off topic, talking about stocking his bass pond, and how his hayfield's been messed up by the crop circle. :) "Balance" and "Dragon's Teeth" (SPELL SINGERS; these two stories have no connection with Lackey's Free Bards to date). They're designed to be read back-to-back, concerning the developing relationship between middle-aged Masterclass sorceress Martis and her newly assigned bodyguard Lyran, and opening with a reversal of the usual pattern: *she* makes an insulting snap judgement of *his* professional ability, since he looks and dresses more like a dancer than a swordsman. (Martis, however, isn't at her best, having been assigned to deal with a much-loved student gone bad, and generally being hard to please anyway.) The first story explores Lyran's Way of Balance as Martis gets to know him. In their second outing, the two have evolved a partnership rather than a mage/bodyguard relationship. "The Cup and the Caldron" [sic] (GRAILS OF LIGHT). In Arthur's reign, a young nun and a healer of the Old Religion are called to the same quest, although one sees the Grail and the other Cerridwen's Cauldron. "Dance Track" (Mike Resnick's ALTERNATE HEROES) combines Dixon's passion for cars and Lackey's for dance. One point of departure is that James Dean, surviving a car wreck and given the choice of tearing up his contract or quitting his hobby of racing, stuffed the pieces into a studio exec's pipe and signed on with Bugatti's Grand Prix team as a driver. Another (making for a nice story, but going beyond the pale historically) is that the dancer Isadora Duncan has been made a generation younger. (Her involvement with the Bugatti team - as their previous driver, WWII having left them short a few years ago - is OK by me, though, given her history as I know it.) "Dumb Feast" (Mike Resnick's CHRISTMAS GHOSTS). Wealthy Victorian lawyer Aaron Brubaker initially seems very sympathetic; he misses his late wife so much that he's casting the spell of a "dumb feast" to summon Elizabeth's spirit on Christmas Eve. But Elizabeth, in death, no longer has to fit the mold he forced her into during their marriage... "The Enemy of My Enemy" (Robert Adams' anthology FRIENDS OF THE HORSECLANS). Set in the post-holocaust Horseclans world, wherein the survivors were far from major cities, e.g. the people of the western reservations in the U.S. Lackey chose to focus on another group: the Rom (gypsies). The viewpoint alternates between the town smith and the horse-trading Lowara, who at present are be

A good collection of short stories

Published by Thriftbooks.com User , 22 years ago
Both the title and the cover of the book are misleading. It is a collection of 12 short stories, only one of which is about the free bards. The others range from the humorous ("Aliens Ate My Pickup") to the somewhat dark ("Dumb Feast). Two of the stories are about the mage Martis ("Balance" and "Dragon's Teeth"). Not everyone will like all the stories, but most readers will like some of them. I personally liked "Once and Future" which points out that some people will not touch fame with a stick. Overall, it is a good collection.

Published by Thriftbooks.com User , 23 years ago
Although the cover and title are deceptive (hey, she's an author, trying to SELL books, and freely admits it), this is a set of short stories, and only one of them falls into the Bardic Voices series. But the stories are great! As I noticed somebody else mention in another review, "Enemy of My Enemy" was also my favorite. It is a story set in the world of Robert Adams' "Horseclans" series, and originally appeared in a "Friends of the Horseclans" anthology. I also have to say that the drawl in "Aliens Ate My Pickup" was not distressing to me. When you're telling a story from the 1st person point of view of an Oklahoma farmer, it just isn't going to be RIGHT without the drawl. Even Mark Twain used that tactic to put people IN the story.

Published by Thriftbooks.com User , 24 years ago
The title of this work is not very appropriate. The story " Fiddler Fair" is not even the most outstanding or interesting story in this Anthology. And, if Mr Dixon helped with all of the stories, then shouldn't he get some credit? I enjoyed the story, "The Enemy of my Enemy" best. I think that "Aliens ate my Pickup" is very hard to make out, because of the narrator's drawl. The concept is fascinating! One last thing: LAwrence of Arabia was a Moslem?!

Published by Thriftbooks.com User , 24 years ago
Even though not every story is absolutely up to Misty's usual standards, her commentary on them is fascinating. The stories are wonderful, and anyone who's read the Bardic Voices novels should definitely read this, if only for the original version of Rune's story. Worth the money! :)
Trustpilot
Copyright © 2022 Thriftbooks.com Terms of Use | Privacy Policy | Do Not Sell My Personal Information | Accessibility Statement
ThriftBooks® and the ThriftBooks® logo are registered trademarks of Thrift Books Global, LLC