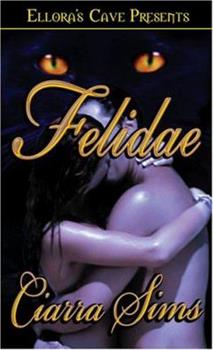 Felidae By Ciarra Sims Descended from Ancient Egyptians, the Felidaens are full of magic and spells. Half-human and half-feline, these creatures strive to blend into the day to day scheme of things—at... This description may be from another edition of this product.

Published by Thriftbooks.com User , 16 years ago
[Note: The following review refers to the electronic version of this title.] The Felidae are a race of feline shapeshifters descended from the ancient Egyptians (where cats were worshipped, naturally!). In modern day America, Tabitha Fenwick is the runt of her litter-a beautiful red tabby in her cat form-who uses her feline agility and climbing skills in her job as a security officer at the swank Arpel Hotel. Tabitha has a bad case of lust for her boss Brenton Calder, the owner of the hotel. She's inexperienced and not too sure how to handle human sexual interactions though, but she knows that she wants Brenton to be her first lover. How can she interest him in her human form, which is so different from the tall, slim blondes that he seems to like so much? Easy! She'll just go to her Grandmother and get a love potion! Unfortunately, Tabitha has difficulty following the instructions on the label, and gets herself and Brenton into more trouble than she ever envisioned. This is a fun short novel which not only has very hot love scenes, but also makes you laugh. Tabitha is an engaging character for the very reason that she is not perfect. She thinks she knows what she wants, and goes after it with gusto. When she makes a mistake by jumping to conclusions, she regroups, rethinks, and tries again. The hero is quite mysterious throughout the story, until the final scene in which all is revealed. The man/woman love scenes are very explicit and exciting. Throw in some shapeshifting, and some magic potions, blend well with skilled writing and a fast pace, and you have a great recipe for an amusing story. -- Jean, Fallen Angel Reviews (courtesy of Fallen Angel Reviews)
Trustpilot
Copyright © 2022 Thriftbooks.com Terms of Use | Privacy Policy | Do Not Sell My Personal Information | Accessibility Statement
ThriftBooks® and the ThriftBooks® logo are registered trademarks of Thrift Books Global, LLC