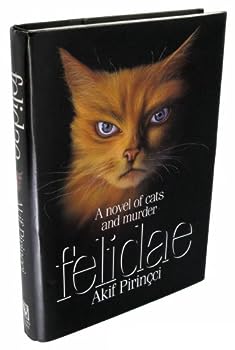 (Book #1 in the Felidae Series)

"The Emergent Manager" examines the process of becoming a manager within organizations and considers how people relate the ways in which they 'manage' their lives to their development as managers in... This description may be from another edition of this product.

A Cat Mystery That Is Not a Cosy

Published by Thriftbooks.com User , 17 years ago
All right, this was written by a cat named Francis (Gustav is his owner and is a jerk like Garfield's Jon). There seems to be a vogue now for detective stories with cat heros, but I have resisted reading any of them up to now, even though I love and admire cats. Read this one because of its beautiful cover picture, and the fact that the author is a German Turk who writes very well even in translation to English (kudos to Ralph Noble in that role). This book is about a mass murderer of cats, by a cat, who has some mad-scientist dream of breeding a super race of felines who will come to dominate the world and eradicate or enslave human beings. A very cynical version of Animal Farm which also reminds me of that appalling book Perfume and also of Jorge Luis Borges. No Englishman could have written this, but the Englishness of it is pervasive --i.e. the morality (in spite of the political incorrectness of defending Anglo-Saxon ethos these days). The gimmick here is of course that cats are just as smart as we are, and spend the time while we are asleep at night reading our books and playing on our computers, and discussing Kierkegaardian philosophy when they are not driven crazy by the pheremones of females in heat (smelly stuff to us humans, but what do we know about the powers and subtleties of smells?)

The Bestselling Novel Of Cats And Murder!

Published by Thriftbooks.com User , 20 years ago
I purchased this book in an England Secondhand store. For 60 Pence. It was, I found, One of the best books I have ever read!This book is for anyone at all. You don't even have to like cats.I wish my cat could read it!!!:-)

Published by Thriftbooks.com User , 21 years ago
Cats are superior to humans; just ask any dog. But does that necessarily make them better creatures? Not necessarily, as Francis, this story's feline hero, discovers soon after having moved to a new home with his human pal Gustav. Equally annoyed by the laboratory smells of their new house and eager to get to know the rest of his new neighborhood, Francis decides to take a walk - and walks right into the discovery of a dead cat and, by virtue of that discovery, also into the guy who instantaneously becomes his new best friend. And as gruff old Bluebeard, Francis's new side kick explains to him, this is not the only dead cat he has recently seen. In fact, "cold bags" (cat corpses) have turned up in the neighborhood with an alarming frequency, all killed expertly and quickly by a bite to their necks. And their appearance somehow seems to coincide with the arrival of an exotic, wild, self-described "very ancient but very new" breed of cats whose females are, Francis is soon to discover, as seductive as they are angels of death to any male cat mating with them. Chased by the local bully, King Kong, and his two brainless minions Hermann 1 and Hermann 2, and haunted by nightmares of being jerked around by puppet master Gregor Mendel (the Austrian monk who, in the late 19th century, first came up with the basic biological principles on breeding and inheritance of genes), Francis almost stumbles into the reunion of a secret sect honoring a certain Claudandus, mysterious savior of all cats' misery on earth who alone escaped a cruel series of experiments performed in the very house Francis now calls his home. But while sect members pay tribute to Claudandus's memory by the macabre practice of jumping into the electric current produced by two open wires, this is not the cause of the feline population's demise; although the figure of Claudandus undeniably has something to do with it. With his human buddy and (in Bluebeard's lingo) "tin opener" Gustav completely oblivious to the horrors Francis must witness and investigate, our feline sleuth is left to his own wits - at least until Bluebeard introduces him to Pascal, the neighborhood's other "smart [cat]." Never mind the format of an animated movie: this is an intelligently crafted thriller and, at the same time, a story that every cat lover will relish. Author Akif Pirincci, who wrote the book on which this movie is based, says that it was inspired by his own cats; and he certainly brings to it as much talent as a writer as understanding for our four-pawed friends. "Felidae," both the book and the movie, easily stands its ground not only next to other (and, in the States, better-known) cat detective stories such as those by Lillian Jackson Braun, but next to the great thrillers involving human detectives as well. The animated movie brings Pirincci's story of, as his hero Francis once says, "horrors east of Aristocats" to life with the help of a number of actors well-chosen to portray the book's characters

Published by Thriftbooks.com User , 22 years ago
This book is terrific! It is far more gripping and entertaining that one would think with just a brief synopsis of the plot. The author's talent makes what could be a child's animal tale into a gripping adult mystery. It is amazing!
Trustpilot
Copyright © 2022 Thriftbooks.com Terms of Use | Privacy Policy | Do Not Sell or Share My Personal Information | Accessibility Statement
ThriftBooks® and the ThriftBooks® logo are registered trademarks of Thrift Books Global, LLC