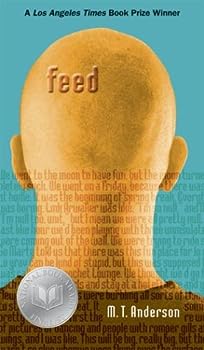 This description may be from another edition of this product. The tour de force that set the gold standard for dystopian YA fiction -- in a compelling paperback edition. For Titus and his friends, it started out like any ordinary trip to the moon -- a chance to...

Published by ThriftBooks User , 1 year ago
I read this book for one of my classes and it sparked a lot of discussion. I think it’s was a good storyline and I sure grabbed my attention.

WOW. Wish I could give it more than 5 stars.

Published by Thriftbooks.com User , 17 years ago
I'd heard good things about this book, so I was willing to give it a try even though I was less than impressed with the same author's vampire novel, Thirsty. Feed, however, deserved all its buzz, plus more. This book is a piece of brilliance. In this dystopian novel, you'll hear echoes of Holden Caulfield, as well as bits of Minority Report and language worthy of writers like Douglas Coupland and Francesca Lia Block, but M.T. Anderson still creates a world that is at once unique and frighteningly familiar.The invented slang and the culture from which it has sprung are pitch-perfect, and the tone of the writing rides a fine line between absurdly funny and darkly horrifying. The futuristic world described in the book is exhausting, sickening, ridiculous, seductive and brokenly beautiful. The fact that it is, more or less, the world we live in today, makes this the most terrifying book I've read since Margaret Atwood's "The Handmaid's Tale."This book is for people who like to think and who are willing to examine their lives. Such people -- no matter how young they are -- will be able to handle the occasional curse word that pops up in the book. I couldn't put this book down. It's a fast read, and worth rereading. I felt the ending was a little "light" and disappointing, but the ride that gets you there is unique and unforgettable.

Consumerism as it is

Published by Thriftbooks.com User , 19 years ago
Reading this work shed some light on the way popular culture is heading. Titus, the narrator, shares his experiences in first-person--complete with the language today's young generation uses. His world is strongly influenced by the feed, a neural-based network of ads and other applications traditionally associated with the Internet. Told in a cynical and indifferent way so common with today's youth, Feed reveals the dangers of living a shallow life centered around the individual. The result is a sense of suspicion as technology further enables companies to solicit their wares or services.I recommend this reading to high school students everywhere.

So possible, so frightening

Published by Thriftbooks.com User , 19 years ago
This is a not-to-be-missed look at a not too distant future, where technology has been taken to the next degree. Implanted in the brain when a child is just an infant is the Feed, a link to an on-line world with instantaneous hype. Take a trip to the moon, and the Feed automatically clues you in to where the "in" places are to go. The Feed knows your buying preferences, your entertainment preferences, how to plug the latest fashion to fill your every want and it knows how to generate your next "need". This is consumerism on steriods. And, speaking of steroids, there is a trip to the tissue farm, where filet mignon is growing in the fields. The dialog is so real; the consumerism is so possible; the degradation of the global environment is so near. This book paints a picture of a world that is truly more frightening than horror stories. All of this is ingeniously included in a boy meets girl story of seemingly normal adolescence.Scariest of all: it seems almost inevitable. An outstanding effort by M. T. Anderson.

A future not too far from the present.

Published by Thriftbooks.com User , 19 years ago
M.T. Anderson has created a dystopian future on par with Huxley's Brave New World. The book imagines a future that under the surface is not too far from what is going on today. It's a great commentary on consumer culture, and a slightly scary view of where we could be headed. It gives you a lot to think about.I'm a kid's bookseller and I do not hesitate to reccomend this book.I'm a geek for M. T. Anderson. He's an amazingly versatile writer who has become one of my favorites.

Published by Thriftbooks.com User , 19 years ago
I was enlisted earlier this year by a college professor to share my expertise with her online children's literature class. Two weeks ago, just before I left for BookExpo, one of the students asked me: "It seems that you like reading very much, maybe you can share with us why do you enjoy it so much? I really would like to know." The beginning of my response was: "A great book can take me off to a different world or bring me closer to this one. Frequently a great book will grab me by the throat and slam me against the wall..." FEED, the latest book by M.T. Anderson, did all of those things to me--and more. In fact, at the moment it feels as if my nose is pulverized and askew and that the skin covering my shoulder blades scraped away when I slid down that wall and landed hard on my bottom. I woke up long before dawn--from a mildly bad dream related to a part of the story I read last night--and quietly slipped out to my desk to finish the rest of the book. FEED is a dark, futuristic satire. It's a tale both intense and extreme that pokes fun at our disposible, consumeristic society, at our communications revolution, at the increasing role of corporations in our education systems, and at the diminished vocabulary skills among those people who consistantly resort to a particular four-letter word as the adjective of choice in any given situation. You may not enjoy reading a book that spews like a rapper or slams into you as if you've taken a left turn into a mosh pit, but the profound messages in FEED clearly make it the cautionary tale of the year. The story begins on the Moon, where Titus and his friends have gone for spring break. He and his buddies all have Feed, which is an online computer implant typically installed shortly after birth. Feed constantly bombards the characters with information and banners, much of which has to do with the latest fashions, upcars, and music. It also provides them with Chat--the capacity to mentally instant message each other. "...I was playing with the magnets on my boots and trying not to look at her. I didn't want her to feel my eyes before I made my move. I was careful. Quendy and Loga went off to the bathroom because hairstyles had changed.Marty drifted around and made slit-eyes at Link. Link and I were chatting about the girl, like I was going,She is meg youch,and he was going, What the hell's she wearing?, and I was going, Wool. It's wool. Like from an animal,and then Calista did her own chat to us, which was,If you want to hear about an animal, what about two guys staring with their mouths wide open so they look completely Cro-Magnon?..." So Titus gets to meet the girl, Violet, but shortly thereafter they and most of his friends have their Feeds hacked by a wild old white-haired guy on the dance floor... This vision of our future planet is one you don't want to miss. I've never seen or read the original story of Titus (Andronicus--Shakespeare tragedy), but its characterization as symbolization
Copyright © 2020 Thriftbooks.com Terms of Use | Privacy Policy | Do Not Sell My Personal Information | Accessibility Statement
ThriftBooks® and the ThriftBooks® logo are registered trademarks of Thrift Books Global, LLC