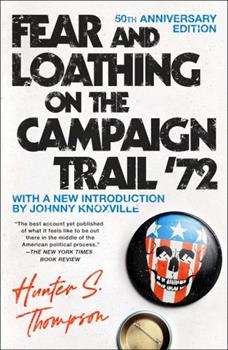 Fear and Loathing on the Campaign Trail '72

From the legendary journalist and creator of "Gonzo" journalism Hunter S. Thompson comes the bestselling critical look at Nixon and McGovern's 1972 presidential election. Forty years after its original publication, Fear and Loathing on the Campaign Trail '72 remains a cornerstone of American political journalism and one of the bestselling campaign books of all time. Hunter S. Thompson's searing account of the battle for the 1972 presidency--from the...

Published by Thriftbooks.com User , 17 years ago
All too often, Hunter Thompson's remarkable and vast journalistic production has been overwhelmed and deluded by his famous work, Fear and Loathing in Las Vegas. It would seem that most Thompson readers fail to see that Thompson's works, far from being one esoteric drug opus, range the spectrum of popular cultre, politics, and to a great extent a large segment of American history. One of his best and most illuminating books, Fear and Loathing on the Campaign Trail 72, is written with the cutting commentary and breakneck pace so recognizable as Thompson. However, each comment and postulation is well researched and based on deep thought, even if enhanced by the occassional milky hit of Singapore Gray. Thompson studies the 1972 Presidential election month by month, following both polls and candidates across the nation. Rather than see the election as a political institution, Thompson slices away the media fat and studies candidates, their motivations, and the varied behavior of the American constituency. The author takes time to explore each candidate, although concentrating mostly on the Democratic Party, discussing their platforms on the major issues of the time: amnesty, the de-escalation of Vietnam, the civil rights movement, etc. and accurately and insightfully illustrates their place in not only the election, but in America during the early 1970's. Thompson, having closely studied politics for innumberable years illustrates waves and trends throughout American politics, from 1964-72, with numerous and ultimately accurate predictions for the future. Although a different work than Fear in Loathing in Las Vegas, a very interesting and personal look at American politics and Thompson the journalist. A must read for "politics junkies" as well as Thompson fans.

Published by Thriftbooks.com User , 19 years ago
When Hunter S. Thompson gets going there's no stopping. His insights are cutting, his remarks are wild and he's got some of the fiercest intellect in the land. Writing as an outsider he manages to make this campaign 30 years in the past into a vibrant and exciting epic. You might know anything about Muskie or McGovern or even Gary Hart but the sheer excitement of the campaign trail as described by Thompson beats any sports show out there.From December 1971 until the election Thompson wrote monthly synopsises of what was happening in the Democratic party. Early on he began backing McGovern uncertain that McGovern could win, but noting that people would rather vote for someone rather than vote for the candidate most likely to beat the other guy. This book captures the excitement from when it looks like McGovern might have a chance to the despair when McGovern loses big in November (with unknowing hints at what was to come including Watergate mentions and dismissal of Jimmy Carter as a redneck)If you tried reading Primary Colors and All The King's Men and felt left out in the cold, read this book and understand the electoral process in all its glory.

Gonzo on the Campaign Trail

Published by Thriftbooks.com User , 20 years ago
Hunter S. Thompson became a self-described political junkie from his days on the 1972 Presidential campaign trail. Unabashedly throwing his support behind Democratic candidate George McGovern, Dr. Thompson takes on a dizzying journey from hotel room to hotel room across the country lauding his man McGovern and railing against his enemy Richard Nixon. The book provides as much detail about Mr. Thompson's activities as they do the campaigns themselves, but hell, Dr. Thompson is alot more interesting. One of the most poignant moments is when Dr. Thompson rides in a limo with his enemy Nixon and they discuss football, which is a passion of both men. Dr. Thompson actually sees some humanity in Nixon and breaks down the facade that Nixon and most politicians erect. He shows a human side to a man who is often looked upon as inhuman. Dr. Thompson still despises him and his views, but by peeling away a layer, he can expose things that lay beneath the surface. For people like myself who were too young to experience this campaign and the times, Fear & Loathing: On the Campaign Trail '72 is a brilliant and amazing ride through the times.

Hunter S. Thompson at his best.

Published by Thriftbooks.com User , 22 years ago
From Thompson's opening description of Washington D.C. to his final pondering on power and the nature of the political beast known as the presidential candidate, Thompson is right on the money. In this chronicle he follows various democratic hopefuls around the country during their campaigns to win the democratic nomination for the office of the president. He contrasts the personalities of the candidates as well as their platforms. He shows the effects of the rigors of campaigning on the individuals and the workings of the political machine of the democratic party in the early 1970's. After McGovern won the nomination, he analyzes how he won it and how it caused the schizm in the democratic party. He shows the differences between the nomination campaign and the presidential campaign from the National party perspective and finally he contrasts the Nixon campaign and bargaining with that of McGovern. This is one of the best that Thompson ever has written. His analysis of the campaign and the personalities was pretty much right on the money. The book is not all work and no play, though. His incisive wit is promently displayed and his knack of being in the right place (or the wrong in some cases) gives him the chance to view certain activities from a perspective that most people don't get a chance to see. His descriptions of the organization meeting for the "spontaneous demonstration" by basically high school students at the Republican convention is hysterical. Especially his reasoning of why he participated as a 35 year old wearing a McGovern for President button alone is worth reading, not to mention the incident on the Sunshine Special that caused him to become persona nongrata on the Muskie campaign. If any Thompson book should be made required reading, this one is it. At least you'll enjoy it.

A Brilliancy of Political Journalism

Published by Thriftbooks.com User , 24 years ago
This book pretty much got me through a degree in Poly Sci. Written while Thompson was still at the top of his game, Hunter reveals all in a slash and burn book about what goes on during a presidential campaign. For those who haven't done a Thompson book, the concept is simple: strap on a .357, get a head full of really dangerous chemicals, and GET THE STORY; even if you have to create it yourself along the way. While this might seem a bizarre way to conduct journalism, it produces brilliant insights into whatever he chooses to study at the time. Hunter is so weird and stoned that he isn't a member of society anymore and has no givens. Everything he sees must be tested with the eyes and mind of the outsider because that is what his chemically distorted perceptions make him. And it also makes him one of the funniest modern writers to ever put pen to paper.
Trustpilot
Copyright © 2022 Thriftbooks.com Terms of Use | Privacy Policy | Do Not Sell My Personal Information | Accessibility Statement
ThriftBooks® and the ThriftBooks® logo are registered trademarks of Thrift Books Global, LLC