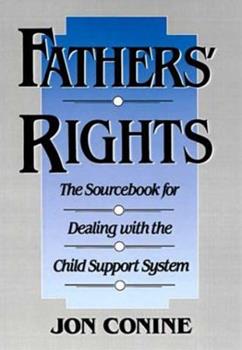 Fathers' Rights: The Sourcebook for Dealing with the Child Support System

Fathers' Rights explains to separated or divorced natural and step fathers how to effectively deal with the child support program without losing everything they have and insuring that their children... This description may be from another edition of this product.

Published by Thriftbooks.com User , 17 years ago
I have not read this book, but am looking for ANY direction in our current child UNsupport system. http://LiarWife.com

Isn't a Father more than a Paycheck and Spermbank?

Published by Thriftbooks.com User , 18 years ago
If women were treated as second class citizens the way fathers are treated by the so-called family court, the feminists would pitch an uproar the likes of which we have never seen. Statistics show that approximately %78 of divorices are filed by women. A divorice attorney for a women has it easy. When I went as a Pro Se litigent in 1993, the court-appointed mediator at Washington County in Minnesota blithly explained to me that "Joint physical and legal custody didn't matter." I went to be adjudicated as be my daughter's legal father, and could not afford the $1,500.00 retainer for an attorney. After taking my daughter's mother to court for denial of visitation five times in ten years, I've learnt that the only thing the courts are interested in are seperating the father from his children and his money, and wether or not the judge has a personal like for your attorney. I still see my daughter -- when it is to her mother's convenience. Attorneys make money hand over fist in this business -- and this is indeed big business! The case workers and court mediators are women who have a chip on their shoulder. Judges are adament when it comes to enforcing child support, but alarmingly lax when it comes to enforcing visitation. Yet our hard-earned tax dollars pay their salary. I don't understand why more fathers don't speak out on these issues, as any women certainly would.
Trustpilot
Copyright © 2022 Thriftbooks.com Terms of Use | Privacy Policy | Do Not Sell My Personal Information | Accessibility Statement
ThriftBooks® and the ThriftBooks® logo are registered trademarks of Thrift Books Global, LLC