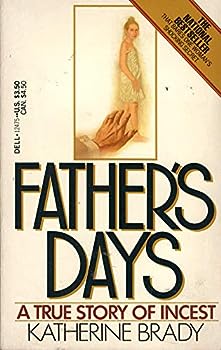 For ten years Katherine Brady led a double life. Growing up in a small midwestern town, she was the ideal teenager-beauty queen, honor student, and with a boyfriend from one of the town's most elite... This description may be from another edition of this product.

Published by Thriftbooks.com User , 14 years ago
I have read this book 3 times. It is very blunt and descriptive. A father perhaps not sharing enough sex from his wife, with an insatiable appetite has eyes on his young daughter from age six. Lonely & rejected the girl feels comfort laying along side father. As she grows he starts playing with her, especially when young tits develop.Using his power, he forces her to play with him. Then he starts fully full intercourse Her guilt & disgust are overwhelming but she doesn't know what to do. There is no family support. She finds a seemingly nice girl and they get married. He is a brute and a sexual klutz. With two daughters, she gets courage to flee. While writing a book on incest she gets involved with two women and begins enjoying the pleasures of lesbos. There is a custody battle. She is forced to confront her parents and bring them to court, humiliated, to testify for her. This is a Very powerful book & highly descriptive. Some might feel uncomfortable. Yet the book is hard to put down. Moreover, it tells of something that happens but never discussed. HIGHLY RECOMMENDED. this book.
Trustpilot
Copyright © 2022 Thriftbooks.com Terms of Use | Privacy Policy | Do Not Sell or Share My Personal Information | Accessibility Statement
ThriftBooks® and the ThriftBooks® logo are registered trademarks of Thrift Books Global, LLC