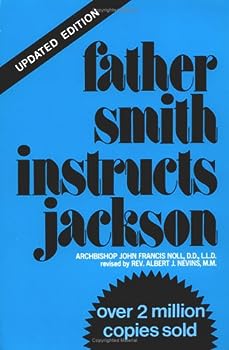 Over 3 million copies of this timeless classic have been sold, and it has influenced thousands of conversions. Witness the engaging and accessible interplay between a priest and a non-Catholic... This description may be from another edition of this product.

Published by Thriftbooks.com User , 18 years ago
This terrific book has been in print for over 80 years, and after reading it one understands why "Father Smith Instructs Jackson" has sold over 2 million copies. In dialogue form, Fr. Smith guides a curious, intelligent, but somewhat agnostic inquirer to understand the truth of the Catholic faith. Since it's original printing, it has been revised to incorporate the teachings of the Second Vatican Council. But unlike other similar efforts, the revisions don't feel tacked-on or interrupt the flow of the narrative. Fr. Albert Nevins was able to capture the style and prose of Archbishop Noll's original. In addition to being a useful catechism, the book is a solid work of apologetics. Regarding the latter, there's an interesting story to how I acquired the book. I bought it on eBay from a seller who included the word "Bible" in his ID. He sent the book promptly and in the condition promised, but he included an anti-Catholic tract that misrepresents what the Church teaches. When I called the seller's attention to his pamphlet, he accused me of worshipping "saints" and a "pedophile pope"--precisely the sort of nonsense "Father Smith Instructs Jackson" so thoroughly debunks. If you have a Catholic (or would-be Catholic) friend who is turned-off by traditional catechisms, this is the book for him.

Published by Thriftbooks.com User , 23 years ago
I read this book for the first time back in 1965-1966. I have shared this book with several of my catholic friends who found the book to be exqusided. I have the May 1953 editition. Naturally I had to order the revised edition. Since reading the new edition I find it very, very informative. and I highly recommend it be read by all old and new Catholics. It will answer many if not most of the questions you have about the Catholic Faith. God Bless You!
Trustpilot
Copyright © 2022 Thriftbooks.com Terms of Use | Privacy Policy | Do Not Sell or Share My Personal Information | Accessibility Statement
ThriftBooks® and the ThriftBooks® logo are registered trademarks of Thrift Books Global, LLC