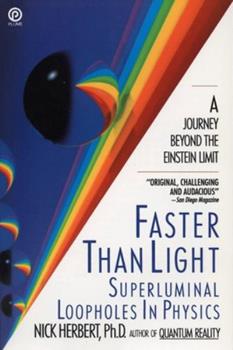 "Even though most physicists believe that the speed of light is as fast as anyone can go, Einstein's theory of special relativity does not rule out faster-than-light (FTL) travel. On the contrary, it seems to indicate that certain superluminal or FTL effects would permit us to re-experience the past: time travel would become a reality, not science fiction. Through this crack in the cosmic egg steps Herbert, a Stanford physicist and author of Quantum...

Maybe Nick Herbert should be a lesion to Joao Magueijo?

Published by Thriftbooks.com User , 15 years ago
Faster Than the Speed of Light: The Story of a Scientific SpeculationNick Herbert hadn't heard of Joao Magueijo when he wrote his book and did his research. But Magueijo didn't have that excuse for not mentioning Nick Herbert? I give the toss to Nick Herbert as being more open to innovative ideas. In both cases they could have been more forgiving of our ignorance and given equations... But it is our way off the Earth to the heavens that is involved here, and Nick Herbert put material that had to be of use in this research in his book. The other fellow just didn't. Compare and contrast the two for yourself.

Is time travel possible? This book is food for thought

Published by Thriftbooks.com User , 15 years ago
Is time travel possible? Buried at the heart of this question is perhaps another, more interesting question being: Do we even have the physiological ability to accurately perceive how time passes? Like the first question, this book provides some interesting food for thought on the second question as well. As has been pointed out by other reviewers, this book from 1988 certainly should not be read alone and to the nominated other suggested works of Brian Greene's Elegant Universe and Fabric of the Cosmos I would also add Lee Smolin's The Trouble with Physics (which questions the efficacy of string theory itself) and also David Darling's Teleportation the impossible leap which is a more recent treatment of the developments relating to using quantum entanglement as potential means for interstellar/instantanious communications. But back to basics: Do we accurately perceive time? It's been an incident of scientific progress that great errors occur when natural human insights are imported into scientific theory without the benefit of testing. Two cases in point are the Ptolemaic model of the universe wherein the simple observer assumption that the earth is at the center of the universe and that everything revolves around it is taken as scientific fact and also the Aristetalian dichotemy between body and soul, itself another simple observer assumption that the soul exists independently of the body. Conversely it's also been an incident of scientific progress that when one is willing to come forward and seriously challenge convention, there is a potential for great scientific advance. Again, citing the Ptolemaic model, the Copernican revolution was seriously revolutionary because it challenged the observer assumption that we alone in the universe were motionless while the rest of creation alone moved. And again, citing the Aristetelian model, the soul/body dichotemy has come under attack based on recent developments in evolutionary psychology which have shown the close correspondence between changes in brain physiology and alterations in human behavior. (If there is a soul then why does the loss some brain cells so radically effect human behavior. See Phantoms in the Brain by V.S. Ramashandran.) It is in these regards that the question of the human perception of time has had a particular salience and power. And until 1957, no less than Richard Feynman was betting that our perceptions of time were way off. To understand why Feynman made and lost his bet we need to review some basic physics. There are four fundamental physical forces which govern the universe. Acting at macroscopic scales we have gravitation and electromagnetism. Significantly by 1957 testing had shown that each force was time symetrical. In other words, the processes by which it operated worked the same in forward and reverse. At the microscopic level, the strong nuclear force was also found to be time symetrical. So when Tsung Dao Lee and Chen Ning Yang decided to

A must-read, with one flaw

Published by Thriftbooks.com User , 22 years ago
The author gets high marks for realizing that an acceleration of 1g for 1 year will yield light speed and for analyzing every possible means to break the light speed barrier for both space travel and communications. The book gets four stars instead of five, though, due to a faulty analysis on the communications front. The author makes the intuitive leap that since the Einstein - Podolsky - Rosen experiment reveals the production of two like-polarized photons from the exitation of one calcium vapor atom which can then be detected by calcite crystals at different locations, faster than light communication is possible between the two calcite crystal locations by modulating the crystals themselves. In doing so, he fails to grasp that the signal emanates from the calcium vapor source, not the crystal, and that usuable information can only be fed into the system or changed at the source. The remainder of the book is excellent.The reader should also be aware that this book was originally written in 1988, and this paperback edition has not been updated to include the ramifications of string theory or M-theory. This book should therefore be followed with "The Elegant Universe" by Brian Greene.

Published by Thriftbooks.com User , 23 years ago
This is on of the best popularizations I've ever read. Almost every conceivable way to exceed light speed has been debunked here. The author does however leave open tantalizing options that still have some credibility. Read it in three sittings...

Published by Thriftbooks.com User , 23 years ago
I read this book in a few days and found it most enjoyable. It never drags. Although I have a Ph.D. in Physics, and specialized in Relativity, Herbert's book filled in many gaps in my education, and reminded me of stuff that I had forgotten. A scientifically literate lay person should be able to get the correct flavor of most ideas. A physicist, craving a more concrete and pictorial understanding then is provided here, as with any popularization, will have to work to fill in the gaps to the best of his (or her) ability. Line diagrams, so far as they go, are well done but a few more in most chapters could help the reader greatly. In particular, I recommend several more in chap. 5 on advanced waves, and in chap. 7 on tachyons and antiparticles. The common idea that lay readers are too unskilled to profit from diagrams -- and, as with math formulas, may even be scared away -- is probably unfair to many, especially the ones who would pick up a popularization on an advanced topic in Physics.Dr. Herbert's book keeps a fine level and apart from the slight shortage of diagrams, appears to have escaped any marked "dumbing down" at the hands of editors, but I add a cautionary remark. Removing visual aids apparently makes a book "easier to read," hence more marketable--an editor may reason that the reader won't have to concentrate as much. But there's a point--quickly reached in Physics --where the truncated product becomes too superficial to reward a careful and intelligent reader. So, unless handled with great care, this commercial approach throws out the baby with the bathwater, crippling the very "product" it was supposed to serve.
Trustpilot
Copyright © 2022 Thriftbooks.com Terms of Use | Privacy Policy | Do Not Sell or Share My Personal Information | Accessibility Statement
ThriftBooks® and the ThriftBooks® logo are registered trademarks of Thrift Books Global, LLC