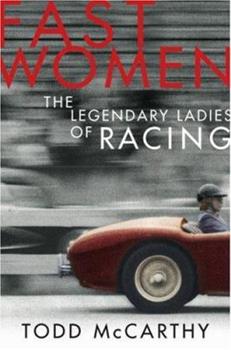 In the early fifties, a hot new lineup of foreign cars arrived on the American scene -- Porsche, Jaguar, Alfa Romeo, MG, Aston-Martin -- bringing with it a new era of race car competition that would entice not only men but women. Fast Women is the story of exceptional women who competed against the best of the men, asserting themselves in the risky, macho, and highly competitive sport of auto racing. From New York to California, these fiery women...

Published by Thriftbooks.com User , 13 years ago
Nearly everyone within sound range of a TV set these days should recognize the name Danica Patrick. And deservedly so. She's currently the highest-ranked female race driver out there. Although there are some fabulous up-and-comers fast catching up to the petite speedster. Before Ms. Patrick, there was Janet Guthrie and Lynn St. James, both of whom raced at Indianapolis and elsewhere. How did these women come to be competing in a sport thought to be almost the exclusive province of the male gender? Believe it or not, since there have been automobiles and racing, there have been women drivers and racing! True. You can discover these 'Legendary Ladies' for yourself by settling in for a delightful and illuminating read when you pick up this very enjoyable book by Todd McCarthy. This historical look at Fast Women really puts the spotlight on the 50s and 60s, when daring women could enter and win races just as the men did. Once they started being a major factor in the competition, the rules were changed (aren't they always?) and big money entered the scene, thus effectively ending the glory days of women's racing. I don't wish to imply that I'm against rules-changing: in this case, safety became the prime concern, which has helped everyone, everywhere. It's a well-known fact that racing car safety translates easily into street car safety, which has been a very good thing indeed! Were it not for air bags and sturdy seat belts, I'd not be here writing this review! But he also gives notable space to the very early pioneers of women's racing, beginning in the the early 1900s. Just as the Europeans were the first to actually build a motor-driven vehicle, so they were the first to race them--in 1895. The first noted female driver was a Frenchwoman, Camille du Gast Crespin (that latter her husband's surname.) She was rather easily identifiable as the only woman in the races she entered, starting in 1900, as her corset commanded her to sit up straight, rather than hunch over the steering wheel as the men did! She was a bit of a dare-devil, anyway, jumping out of hot-air ballons (with a parachute) and racing speedboats. There is a good bit about my hero, Denise McCluggage, who, until Janet Guthrie conquered Indy in the early 70s, was America's most well-known female race driver. But there were others, too: Evelyn Mull, Ruth Levy, Josie von Neumann, Suzy Dietrich and Donna Mae Mims. If you're of a certain age, this book provides a wonderful trip down memory lane. If you're way younger than that, it's still a great ride! Unfortunately, the book does not have an index, but it does have a fabulous bibliography of books, films/TV, videos, newsletters, magazine articles, and web-sites, etc. In the manner of web-sites, not all of them are up-to-date, but they're still better than nothing. I'm grateful for such a list. Fabulous book!

Published by Thriftbooks.com User , 14 years ago
Although confined to women racing sportscars in the fifties, the book is quite interesting and reveals a number of little-known factoids. Had the author continued on into the sixties, several other oolorful and interesting women could have been included such as Janet Guthrie, Donna Mae Mims(briefly mentioned) and Patsy Kenedy(yes, one n)among others. Be that as it may, it is still a very good read.
Trustpilot
Copyright © 2022 Thriftbooks.com Terms of Use | Privacy Policy | Do Not Sell My Personal Information | Accessibility Statement
ThriftBooks® and the ThriftBooks® logo are registered trademarks of Thrift Books Global, LLC