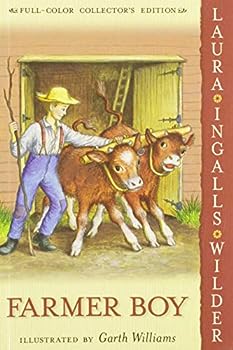 (Book #2 in the Little House Series)

The second book in the treasured Little House series, Farmer Boy is Laura Ingalls Wilder's beloved story of how her husband, Almanzo, grew up as a farmer boy far from the little house where Laura... This description may be from another edition of this product.

Published by Jay , 2 years ago
This is the third book in the series and is about her husband's youth. Apples with onions still stands out to me. It was one of his favorite dishes. Yes I like both of them, but I had never heard of this dish. The time is the 19th century and this is a quite well developed farm. The details bring back great memories and frankly I loved stepping back in time.

Published by Thriftbooks.com User , 13 years ago
This is one book in a series of books from Laura Engalls Wilder. I have read all of the series and highly recommend children being read these books, or reading them themselves. I selected this one because of the lead character being a boy, and I had planned on reading it to two boys ages, seven and eleven. Each chapter takes you through different experiences that a boy went through living on a farm and living in the second half of the 19th century. I like the way Wilder explains in detail how things are made. There were many words that were new to the boys and I was able to simply explain what they mean't. They seemed very interested and also liked the drawings that each chapter used as description of an event in the book. It was such a change from their typical reading and computer games that they really loved the book.

Published by Thriftbooks.com User , 16 years ago
With this work, the author covers the childhood of her future huband. Her story telling continues to shine. Her simple prose is an absolute deight and wonder. I was first exposed to the work well over fifty years ago and still, to this day, give this book, and the others in the series, a read from time to time. I cannot think of better books to get kids interested in reading. Not only are they exposed to the work of a very skilled writer and story teller, but they get a very vivid look at life as it was several generations ago, through the eyes of a child. I cannot recommend this work and the other books in this series highly enough. Recommend to all the rest of the kids out there!

Published by Thriftbooks.com User , 18 years ago
this book was very good 2 thumbs up! I read it for a book report book. It was good in the first chapter it is an introduction on Almanzo and his family.Onward Almanzo does many things he buys his own lemonade with his own money. Later on the story gets more interesting...In the story there is no one problem for Almanzo.In the story their pig Lucy got candy all over her teeth because Almanzo gave her sticky candy.Almanzo and his sisters had to chase the pig down.This was not easy for them to do. In the process Lucy ripped a hole through Almanzo's blouse. I think this book was good and I think you all should read this.I would recommend this book to a friend. I think other people will like it too. It'll be a nice book for all ages. I think this book will be on the shelves for many more years to come.So everybody should read it.

Published by Thriftbooks.com User , 19 years ago
Laura Ingalls Wilder was the writer of the famous "Little House On The Prairie" series. She was married to Almanzo, whose boyhood Laura wrote about in this poignant and touching novel "Farmer Boy". Apparently, Laura must have consulted with her husband and he must have regailed her with the anecdotes and rich memories of farm life in 19th century New York. The story of Almanzo is just as moving and engrossing as the Laura stories of Little House on the prairie. He is a sensitive boy, a hard worker, full of good family values and humanitarian spirit.Far from boring, the description of the farm and Almanzo's family life is very engaging. He talks of his friendly and warm relationship with his parents, his sister and the older brother he admired- Royal. Almanzo takes his farm chores with a happy and proud spirit, not minding all the sheep shearing, the cow milking and the taming of two colts he becomes very attached to. The harvest, country festivities and even their annual Fourth of July trip to New York City is very realistic, interesting, and touching. This could have well been a movie, or at least a spin off of the hit series "Little House on the Prairie", which dealt with Laura's childhood in the Mid-Western plains.I read farmer boy as a very young girl, I must have been nine or ten, and it touched me as no novel other than E. B. White's "Charlotte's Webb" moved me. These novels are timeless classic, and because of their fine literary merit, they are not merely children's stories, they rise above to the level of great reading material for adults. I recommend this novel to any pre-adolescent who has a fondness for Laura Ingalls' style of writing and, like Almanzo, who sacrificed even a job in the city, a love for the simple joys of nature and the farm.

Published by Thriftbooks.com User , 20 years ago
If I could pick one book that every 7,8, or 9 year old MUST read, it would be this one. The story of Almanzo Wilder's life growing up on a farm in New York is totally compelling to children at this age. He's just a small boy, but he's strong, capable, and shoulders so much responsibility in the day-to-day on the farm. He works hard, and like all boys, is daydreamy and wistful to be off playing rather than hauling water or chopping wood, but there's such an intensity of life this brings him that the typical media and gizmo saturated child of today is genuinely envious of Almanzo and charmed to journey with him for the year retold in Farmer Boy.He comes from a large family, his parents very loving yet very hardworking people who expect a lot of Almanzo. Nearly everything they eat, wear, and use is produced there on the farm, and it is one of the greatest pleasures of the book that the planting and weaving and washing and building and milking and all the other countless necessaries are vividly detailed and the reader can almost taste Almanzo's favorite apples and onions or smell the sweetly dusty air of the hay barn. I think every child who has read this book is eager to go out at once and grow a pumpkin just the way Almanzo does it--Almanzo has the secret for growing the biggest pumpkins in the county. And there's no greater inspiration than Almanzo to tempt kids into adventuring with some good wholesome food. The boy's mealtime accounts are absolutely mouthwatering. And working hard from sun up to sun down, that boy could eat!But Almanzo is restless, and not so much to be free to play all day, but to be allowed to work with his father's prize horses. His father is known have the finest horses, and he's not about to let just anybody mess with them. Horses must be handled just right, otherwise you could easily ruin them, and Almanzo's not ready to be trusted with them. The 'coming of age' for Almanzo is one of the most touching and powerful in all of children's literature.Please - if you've a child this age who hasn't yet read or heard Farmer Boy, don't let this book pass them by. By the end of the book you have come to know and love Almanzo so well, it's a sad good-bye indeed. Reader's won't meet him again until years later, as a young man who first meets Laura Ingalls in "By the Shores of Silver Lake".
Trustpilot
Copyright © 2022 Thriftbooks.com Terms of Use | Privacy Policy | Do Not Sell or Share My Personal Information | Accessibility Statement
ThriftBooks® and the ThriftBooks® logo are registered trademarks of Thrift Books Global, LLC