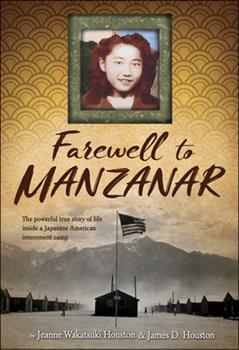 The powerful true story of life in a Japanese American internment camp.During World War II the community called Manzanar was hastily created in the high mountain desert country of California, east of the Sierras. Its purpose was to house thousands of Japanese American internees.One of the first families to arrive was the Wakatsukis, who were ordered to leave their fishing business in Long Beach and take with them only the belongings they could carry...

Published by Thriftbooks.com User , 18 years ago
"Farewell to Manzanar" is by Jeanne Wakatsuki Houston and James D. Houston. In a foreword Jeanne Houston notes that this book, which tells about the internment of a Japanese-American family during World War II, is a true story. "Farewell" is a rich and fascinating chronicle. The Houstons follow the lives of the members of the Wakatsuki family before, during, and after the experience of internment.The narrative is full of compelling details of the family's experiences. It is particularly intriguing to watch how the internment camp evolved into "a world unto itself, with its own logic"--a "desert ghetto." During the course of the book the authors discuss many important topics: religion, education, anti-Asian bigotry, the impact of the Pearl Harbor attack, the military service of Japanese-Americans during the war, and more.The Houstons write vividly of the dislocation, humiliation, and injustice faced by the Wakatsuki family. Also powerful is the narrator's struggle to come to terms with her own ethnic identity.For an interesting companion text, I would suggest "Desert Exile," by Yoshiko Uchida; this book also deals with the internment experience, but from a somewhat different perspective which complements that of the Houstons. I was moved by "Farewell." The book is a profound meditation on both the hope and the tragedy of the United States, in which the "American dream" can become intermingled with American nightmares. I consider this book an important addition to Asian-American studies in particular, and to the canon of multiethnic U.S. literature in general.

A WONDERFUL book of courage and forgiveness.

Published by Thriftbooks.com User , 20 years ago
Farewell to Manzanar was a wonderful story of courage. The courage of a child. The courage of an adult who learn to forgive and not hold in bitterness. To learn how to love herself and to fall in love dispite the turmoils of her life. What an awesome testimony. I applaud Jeanne for sharing this story and having the courage to let go. Her story was written so well, that as I read it I invisioned the events, her dance class with the ballerina trying to keep her dignity, her night outside the camp under the stars, her Dad's tantrums and abuse of her mother, and his feeling of losing control over his faimly's and his own life, the small space that they had to live in and the joy of moving to a larger space. And lastly the day that they left unsure what thier life would be like outside the camp. It was required that I read this book for a Sociology Class, but it opened my eyes to so much more. I will be giving this book to my teenage son to read. He hopes to one day visit Japan and is fascinated with the culture. So, I will be giving him this book to read so he can get a whole picture.

Published by Thriftbooks.com User , 22 years ago
I have been thinking about this book more and more ever since I saw the rascist, effusive film "Snow Falling on Cedars". My big gripe with that film was that it made the Japanese Americans look so weak and helpless without white people to rescue them from their predicament. For those of you who disagreed with my review of that film, I strongly urge you to read (or re-read) "Farwell to Manzanar". This is a frank, accurate, and at times heart-breaking, true story of a Japanese family's internment in the camps. The narrative contains several different threads including:1. The legal and economic injustice done to the author's family and thousands of other Japanese Americans.2. The day to day life and survival requirements in the camps.3. The difficulty of coping with generational differences within an interned Japanese-American family.4. The difficulties and predjudices that Japanese Americans had to overcome in order to rebuild their lives after they were released.Ms. Wakatsuki-Houston's memoir is simple and compelling. She describes her childhood experiences from the objective and mature perspective of an adult, a wife, and a mother. But despite the passage of time her narrative still conveys a great deal of pain and difficulty in coming to terms with her childhood internment at Manzanar.The most interesting part of the book for me was how the author's family attempted to rebuild their lives after the U.S. government robbed and humiliated them. The father immediately started a farming venture whose success was only undermined by unsually adverse environmental conditions. One of the sons served in the military and then resumed the family's fishing business. And the author herself challenged the pedjudiced administration of her highshool by becoming prom queen despite their attempts to thwart her. Contrary to the wishful thinking of "Snow Falling on Cedars", the white people in this book do not come back and redeem themselves. They do not rescue the people they victimized, and they do not receive bows from them. No woman begs the white man for permission to put her arms around him. The people in this memoir endure their mistreatment with strength and dignity. When they are released from the camps, they rebuild their lives on their own without assistance, sentimentality or self-pity.I recommend this book to anyone who wants to learn about a shameful period in American history, and who wants to see how people who are treated unjustly can still survive and move on. But most of all, I recommend this book to people who were taken with the Hollywood version of what happened to Japanese Americans in this country during World War II.

Plaintive memoir about being a Japanese American

Published by Thriftbooks.com User , 23 years ago
I bought this memoir for our church library because it is an excellent personal story about living in a Japanese-American internment camp during World War Two. It is a book about paradoxes: the differences between American living and Japanese traditions; the pride of being Japanese American and the shame of being suspected as traitors; and the dichotomy between an America fighting for freeedom while legislating forced incarceration of American citizens. This book will appeal to students who have studied World War Two and the Holocaust because it turns the spotlight on the hypocrisy of the American government. Although people of the time might say, "things were different then," I would say "yes, they were" and point to this racist example of something America should never do to its people again. This book would also appeal to adults. Most of the baby boomers who I have asked to read this book have all liked it for its truth and plaintive, ethereal ending. An excellent memoir. Congratulations Jean, on a beautiful book.
Trustpilot
Copyright © 2022 Thriftbooks.com Terms of Use | Privacy Policy | Do Not Sell or Share My Personal Information | Accessibility Statement
ThriftBooks® and the ThriftBooks® logo are registered trademarks of Thrift Books Global, LLC