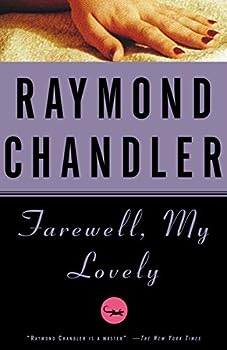 (Book #2 in the Philip Marlowe Series)

This description may be from another edition of this product. Crime fiction master Raymond Chandler's second novel featuring Philip Marlowe, the "quintessential urban private eye" ( Los Angeles Times ). Philip Marlowe's about to give up on a completely routine...

Published by Thriftbooks.com User , 13 years ago
According to Wikipedia, FAREWELL, MY LOVELY (1940) was Raymond Chandler's second novel and created from three short stories--"The Man Who Liked Dogs" (1936), "Try the Girl" (1937), and "Mandarin's Jade" (1937). This makes a lot of sense to me, since Chandler's great creation, Philip Marlowe, seems more like a character from a short story than the deep and complex creation that a great novelist can achieve. Yes, Marlowe is certainly a well-defined in FML. He's a guy with high integrity, down-beat and droll, lyrical in his descriptions, relentless and lonely, and he drinks too much. But why is he this way? And what greater issues do his struggles touch upon? Here, Chandler offers next to nothing, unless you have a film-Noir vision of life and view all winners as corrupt and brutal. Instead, he stays small with Marlowe, a highly focused creation developed in short stories, who offers a perfect streamlined literary voice to tell a novel-length story of crime. This is not to say that Philip Marlowe is ever an uninteresting character in FML. But does he really have a very interesting mind? Take away his lyricism and the grouchy humor of his metaphors and his limits show--he's everybody's sour uncle, boyishly uncompromising, for whom things didn't work out. Of course, you can't really separate character and voice in fiction. And, Marlowe's voice, its absolutely uncanny metaphors and amazing lyricism, explains why Raymond Chandler, among hundreds of crime-fiction writers, is the guy I choose to read. (I'm usually bored by mysteries and crime fiction.) Here are just two examples from FML. "He wore a brown suit of which the coat was too small for his shoulders and his trousers were probably a little tight at the waist. His hat was at least two sizes too small and had been perspired in freely by somebody it fitted better than it fitted him. He wore it about where a house wears a weather vane...A tie dangled outside his buttoned jacket, a black tie which had been tied with a pair of pliers in a knot the size of a pea. ...He had a big flat face and a highbridged fleshy nose that looked as hard as the prow of a cruiser." "Then there were no more houses, just the still dark foothills with an early star or two above them, and the concrete ribbon of road and a sheer drop on one side into a tangle of scrub oak and Manzanita where sometimes you can hear the call of the quails if you stop and keep still and wait. On the other side of the road was a raw clay bank at the edge of which a few unbeatable wild flowers hung on like naughty children that won't go to bed." In FML, I also enjoyed the brief Hemingway parody and was surprised to encounter--SPOILER COMING--a multi-bullet suicide. This was something Martin Amis used to make a point about crime fiction in Night Train where the narrator is, like Philip Marlowe, burned out but amazingly lyrical.

Amazing writing of a difficult life

Published by Thriftbooks.com User , 18 years ago
In Raymond Chandler's second novel, Philip Marlowe gets embroiled in a complex plot involving murder and lost love.Marlowe's on the wrong side of town when he gets drawn into watching a murder in a bar that blacks frequent. As usual for this day and age - this is decades before civil rights, remember - the white cops brush it off as meaningless. Only Marlowe shows some interest in what is going on, and the lug of a man that desperately misses his lost love.Marlowe, pretty down on his luck and drinking hard, pries into the situation as much out of intellectual boredom as anything else. He's not after money, and indeed half the time he's not getting any. He's after making some difference in the world, no matter how small. He's after doing his part to help out those in need. These qualities of honor are taken up by many detectives who came after Marlowe, and are admired by millions of movie viewers who saw the movie version of this book.The gritty world that Marlowe lives in, the desperate state that many of the characters are in, the racism and disregard for the poor and drug use were all harsh realities of Los Angeles in the 1940s. In that swamp of despair roamed Marlowe, barely keeping his own head above water, but determined to do the right thing. It's his doggedness and his adherence to his own rules that make him a man to be admired throughout the ages ... and it's Chandler's brilliant writing style that brings this world to life.Those reviewers who cringe at the drinking, the despair and the racism should thank Chandler for bringing these realities into such clear view, instead of blaming Chandler for showing them a glimpse of a life beyond their air conditioned living rooms.

Published by Thriftbooks.com User , 19 years ago
I'm not much of a fiction reader, but I have just about everything Chandler ever wrote, including a copy of his screenplay for "Double Indemnity." Every couple of years I go back and read everything all over again. How many mysteries can you do that with?The thing is, of course, that you don't read Chandler for the mystery, which is just as well, because it's hard to figure out the story line in his books sometimes. You read, and re-read, Chandler because he created a whole universe in his novels - an image of a Los Angeles with a seedy underside, which suited perfectly the milieu that was associated with the town in the 1940's - the movie people and the parasites that lived off of them, the internal immigrants that flooded California from the Midwest during the Depression, the alienation under a bright sun. A lot of people got their image of California from Chandler.You also read him for the irresistable charm of his protagonist, Marlowe, the shopworn Galahad with the relentlessly absorbing internal monologue that has been imitated by everybody from Jean Claude Belmondo to Garrison Keillor. For a while, Hollywood couldn't get enough of Marlowe, and well into the 70's movies were being made of his books - several of them have been made into movies twice, including this one. I sometimes think that the Marlowe character appeals very strongly to men, or at least a certain type of men, and that's why so many actors - Bogart, Robert Montgomery, Robert Mitchum, and especially Dick Powell - really wanted to play him on the screen.The story starts out with Marlowe just walking down the street and not minding his own business, as usual, and ends up with multiple murders (some of them totally senseless), unspoken mistakes in judgement ( a favorite device of Chandler's) and a lot of unanswered questions. You always find yourself with a sense of brooding emptiness at the end of a Chandler book, a feeling that you've been through an incredible struggle to no purpose at all, and yet you're always glad you were along for the ride all the same. This may very well be the best of the Marlowe novels; it's in my top two for technical perfection along with "The Big Sleep", although I have a personal emotional attachment to "The Long Goodbye." My advice: try them all.

...stands out like a tarantula on a slice of angel food

Published by Thriftbooks.com User , 20 years ago
Farewell My Lovely, Raymond Chandler's second novel in the Philip Marlowe series, transcends the genre it helped to create, and is now (deservedly) viewed by many as literature and as social criticism. Chandler creates moods and telegraphs emotions via the poetic ramblings and outrageous similes from the mind of Philip Marlowe, the protagonist/detective/narrator who is picked up by the collar and dragged into a murder mystery that exposes not only the hypocrisy beneath the surface in the lifestyles of the rich and beautiful, but ultimately, the depravity of the human condition. And all of this is delivered with a caustic sense of humor, a wry wit, and a hypersensitivity to the visual world and it's translation into the language of the mean streets. Although Chandler died shortly before I was born, I grew up in L.A., and I can say that the L.A. Chandler wrote of is in many ways the city of my childhood memories, so well did he capture the ambiance and ambivalence of the 'city of angels'. Some have criticized his plotting and plausability, but emotion, action, and detail were what interested him the most, and in these he excelled. FAREWELL MY LOVELY must be viewed within the context of it's era (published in 1940) to be fully appreciated, but the flow of action, the visual aspect of it's language, and the insights into the very human conflict of corruption verses conscience are timeless. This book, like the first in the Marlowe series (THE BIG SLEEP) was written at the height of Chandler's creative career, and exemplifies the style that has made him a writer's writer, possibly the most imitated author of the past century.

The magic of Marlowe

Published by Thriftbooks.com User , 21 years ago
In "Farewell, My Lovely," Raymond Chandler's second Philip Marlowe novel, Marlowe reluctantly agrees to help a careworn police detective search for a nightclub girl named Velma, a former girlfriend of an ogreish ex-convict named Moose Malloy who is wanted for murder. Marlowe's first lead is the nightclub owner's widow, whom he plies with liquor, only to find out that Velma's whereabouts are being kept a guarded secret. Then, in what initially seems like an unrelated subplot, Marlowe is hired by a man who wants "backup" while he delivers money to some jewel thieves. The man ends up murdered, and Marlowe meets a mysterious girl at the scene of the crime. To think there's no connection between this event and Velma's disappearance would be to underestimate Chandler's genius at plot construction. Chandler cleverly plants false leads to twist the already unpredictable plot and subtle clues that make sense at the end. His colorful characters are masters of deceit; the reader imagines that these people must have great poker faces. They know a lot more than what they're telling Marlowe, and it's exciting to know that Marlowe will eventually be able to guess what they're leaving out. Like J.R.R. Tolkien's Gandalf, Marlowe is one of literature's greatest magicians; the fun of reading the book is waiting for him to pull the rabbit out of the hat at the end.
Copyright © 2020 Thriftbooks.com Terms of Use | Privacy Policy | Do Not Sell My Personal Information | Accessibility Statement
ThriftBooks® and the ThriftBooks® logo are registered trademarks of Thrift Books Global, LLC