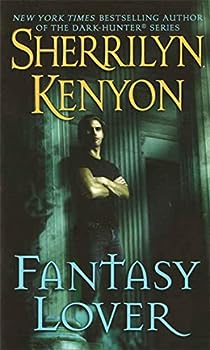 (Book #1 in the Hunter Legends Series)

Dear Reader, Being trapped in a bedroom with a woman is a grand thing. Being trapped in hundreds of bedrooms over two thousand years isn't. And being cursed into a book as a love-slave for eternity... This description may be from another edition of this product.

I love this book..

Published by Elizabeth , 4 years ago
This is my book I have read from sherrilyn kenyon . This is the book that got me hooked on the dark hunter series.. I can't wait to read it again..

Published by Thriftbooks.com User , 6 years ago
This was my first Sherrilynn Kenyon book and it was soooo good it started me on the entire Dark Hunter Series. The entire series is excellent but this first book was one of the best. The introduction to the idea that the Roman and Greek gods and goddesses are still with us (but we are unaware) is terrific. I allows the reader some familiarity with characters we met in our literature classes (decades ago for me). The writing is paced well keeping some tension present but still allowing time to build background, give depth to the characters and wrap us in a developing love (with some steamy moments) that said with me for a long time after I finished the book. This is worth reading. And I think you would enjoy the series.

A Sensual Must Read!!

Published by Thriftbooks.com User , 20 years ago
I devoured this book in record time and can't rave enough about it. It was often amusing, at times poignant, sometimes intense, and always sensual. I'm surprised my hands weren't singed with the extraordinarily steamy scenes! Grace Alexander and Julian of Macedon were incredibly likeable characters and both had past hurts that needed to be overcome. She is a sex therapist who doesn't much care for the sexual act (after a bad first experience) but has a desperate desire to find love. Julian is a legendary warrior born of Aphrodite who has been cursed to be a love-slave for all eternity. After being cursed since 149 B.C., he finally finds out that there is a way to break the curse but there is a catch. Although there is a sizzling mutual attraction that is hard to deny, Grace refuses to treat Julian as a possession to be used physically, instead treating him with kindness and humanity. Julian having numbed his emotions to avoid further pain finds it hard to resist Grace. Physically she attracts him as no woman ever has, emotionally she lures him with a sensitivity he has never been shown throughout his painful life. Ms. Kenyon has an enviable imagination and does a wonderful job bringing to life Greek mythology with well-known gods and goddesses and interesting tales of harsh Spartan life. These are two characters that have you rooting throughout for them - from their first meeting to the very climactic conclusion. This book is a must read and has earned a spot in my keeper shelf.

Published by Thriftbooks.com User , 20 years ago
Few paranormal romances can surpass the exuberance and vivid imagination conjured up by Sherrilyn Kenyon in her irreverent and zany take on a Greek general Julian of Macedon in 149 B.C cursed by his own mother Aphrodite to languish as a love-slave and one bound to be envious of by man with his stamina and passion. Grace Alexander on her twenty-ninth birthday receives a present from her Gypsy sorceress of a friend, Selena. It's a book that locks Julian up and her pleas and chants for him roused him from his imprisonment to set him alive. Never in her years as a sex-therapist has prepared her for such a heavenly temptation - Julian is a woman's dream come true with the brawns, brains and the look factor. A hilarious adventure begins when Julian tries to seduce her into bed while Grace is determined to fight off the attraction and treat him with humanity. Julian is unprepared for the emotions this woman has roused in his abused frame and poisoned soul - and soon learns that love is just a heartbeat away. His bleak and nightmarish past stems from a doomed love that killed his children. His honor and dignity is plundered away by the evil scheme of a jealous brother and misunderstandings towards his hurt mother. Grace's compassion transforms into a healing power that magnifies into love, and when the god of lust Eros informs her that the way to dispel the curse is to resist temptation and come together as one in the next-full moon, she is tenacious to save him but could he be willing to salvage himself?FANTASY LOVER is a buoyant read fuelled by a relentless imagination that captures beautifully the fascinating myths and legends of Greek warriors and gods like the mighty Zeus, love-god Aphrodite, cupid and Psyche. The dramatic revenge, human foibles of envy and pride spun in Julian's tale gives the story substance. It gentles into a romance that brings hope and redemption with Grace as the healer who is intelligent and dignified enough to resist lust and teaches love. Sherrilyn Kenyon is definitely a stellar talent with her celestial tale and sensual powers to mesmerize and provoke imagination. No doubt it is a fantasy that serves as aphrodisiac and candy to the brain, but this sweet charming read is a riot enough to send romance fanatics into a delirious frenzy with their prayers answered.Thank god for a talent like Sherrilyn Kenyon.

Wow! The relationship in this book sings.

Published by Thriftbooks.com User , 20 years ago
Twenty-nine year-old sex therapist Grace Alexander has been celibate for four years after experiencing a horrendous relationship with a self-centered, cruel former lover. Grace's flamboyant, exotic friend Selena decides it's time to get Grace back in the swing of things and she has just the solution -- an ancient tome holding a magnificent male specimen cursed to live between the pages of the book for eternity -- until he's called forth with a magic spell to serve as a love slave to his summoner for a period of one month. Having experienced Selena's so-called magic spells before, Grace isn't worried that the gorgeous guy in the picture is going to magically appear. Surprise, surprise, and happy birthday to Grace!Julian of Macedon, half God, half mortal, is so exceptionally good looking that he made women fall at his feet and men green with envy and jealousy, in his time -- 149 BC. Jealousy and atonement for his sins, is what finds Julian cursed and trapped between the pages of a book only free for one month at a time, if he's lucky. Sometimes that freedom only comes once every one hundred years. When Grace summons him from the book, Julian is resigned and ready to fulfill her every sexual dream and fantasy. Grace, however, has other ideas for Julian. When she discovers just what a heartbreaking, loveless and dark life he's lived, Grace decides to show Julian just what friendship and love mean.Ms. Kenyon creates an absorbing tale filled with larger than life characters from the lowly mortals on up to Greek gods, goddesses and mythological beings. Grace is one of the strongest, most compassionate heroines and Julian one of the most sympathetic, confused and tortured heroes to ever grace the pages of a romance novel. Julian's family runs the gamut of evil to misunderstood, with his mother, Aphrodite, the goddess of love, taking center stage toward the climactic and poignant ending. Readers get a glimpse of things to come and an introduction to the character in the beginning series of Dark Hunters, which I can't wait to read!FANTASY LOVER is an exceptional, fresh and original story from the compelling first page to the exciting, explosive end. I was enthralled throughout, barely able to put it down when real life intruded. Ms. Kenyon is a true word wizard with incredible writing talent. I highly recommend Julian and Grace's story as one that will stay in your heart long after you reach the last page.

Published by Thriftbooks.com User , 21 years ago
All I can say is...WOW! Definitely worth the wait, Fantasy Lover features a tortured and sexy hero, an independant heroine, greek gods, life threatening danger, and voodoo magic thrown in for good measure. If only all greek myths were this sexy. Julian of Macedon is a cursed half mortal half god who is imprisoned by his evil brother in a book. Whenever a woman invokes the spell within the books pages Julian must appear and be her love slave for one month. For two thousand years this is the norm for Julian, until 2002 when Grace Alexander in a drunken joke releases Julian from his imprisonment. Thinking this incarnation will be no different from his previous ones Julian jumps right in ready for some bedroom action. Only Grace has different plans. As Grace denies Julian her bed the two get to know each other and become friends. Then the two are given a surprise as Eros (cupid)comes to tell them how they can break the curse from which Julian suffers. It's impossible...or is it? This book was original from beginning to end. The love scenes were imaginative and HOT, the character motivation was believable, and the plot was full of twists and surpirses. You wont want to loan this copy out to anyone. It's definitely a keeper.

Published by Thriftbooks.com User , 21 years ago
Fantasy Lover is a definite addition to my keeper shelf. I was completely captivated from the first page to the last. Sherrilyn Kenyon has penned one of the best romance novels I have read in many a year. You will laugh, you will cry and you will never want the story to end.Julian of Macedon has existed for millenia within the pages of a mysterious book. He is summoned from the book to serve as the ultimate sex slave. Countless women have called him forth, but only for his physical prowess, never caring who Julian really is.Grace Alexander is a modern day woman who is in the proverbial dating drought. Her eccentric best friend Selena decides that Grace needs a man, and not just any man, she needs Julian of Macedon. Selena presents Grace with the book on her birthday and convinces her to call forth Julian. Of course Grace grudgingly goes along with Selena's plan to humor her friend. Who ever heard of summoning a sex slave from a book, it's crazy.Much to Graces stunned surprise, it works.Julian appears, ready to "perform" as all the other summoners have requested. After thousands of years and women, he has come to expect nothing more. But this time it's completely different. Grace actually wants to talk to him, imagine that!In addition to Grace and Julian, Fantasy Lover is filled with an outstanding array of secondary characters. Ranging from Greek gods and goddesses to street artists of the French quarter. This is a wonderful story and should not be missed!!!
Trustpilot
Copyright © 2022 Thriftbooks.com Terms of Use | Privacy Policy | Do Not Sell My Personal Information | Cookie Preferences | Accessibility Statement
ThriftBooks® and the ThriftBooks® logo are registered trademarks of Thrift Books Global, LLC