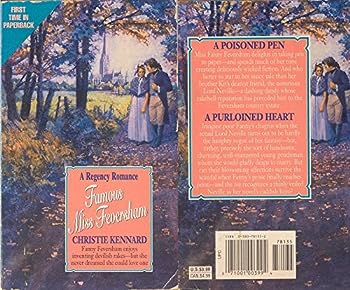 Modeling the character of her new fiction novel after the notorious rakehell Lord Neville, Miss Fanny Feversham is amazed when she learns that Neville is nothing like his reputation and finds herself... This description may be from another edition of this product.

Published by Thriftbooks.com User , 13 years ago
(From back of book) Miss Fanny Feversham delights in taking pen to paper--and spends much of her time creating deliciously wicked fiction. And who better to star in her saucy tale than her brother Kit's dearest friend, the notorious Lord Neville--a dashing dandy whose rakehell reputation has preceded him to the Feversham country estate. Imagine poor Fanny's chagrin when the actual Lord Neville turns out to be hardly the haughty rogue of her fantasy--but, rather, precisely the sort of handsome, charming, well-mannered young gentleman who she would gladly deign to marry. But can their blossoming affections survive the scandal when Fanny's prose finally reaches print--and the ton recognizes a thinly veiled Neville as her novel's caddish hero? This was my first book written by Ms. Kennard, and I totally enjoyed it. From the book synopsis it sounded like an ordinary Regency romance, but the gem was Ms. Kennard's wonderful way of conveying the story. The writing was clever, the dialogues were witty, characters were lovable and believable, and nice (sometimes eccentric) country family scene--which differed from some dark or broken-family scenario. It was a wholesome read. Highly recommend it!

Funny, spunky, and a great read!

Published by Thriftbooks.com User , 22 years ago
You'll delight in the adventures of this strong character and her fabulous adventures! I couldn't put it down!
Trustpilot
Copyright © 2022 Thriftbooks.com Terms of Use | Privacy Policy | Do Not Sell My Personal Information | Accessibility Statement
ThriftBooks® and the ThriftBooks® logo are registered trademarks of Thrift Books Global, LLC