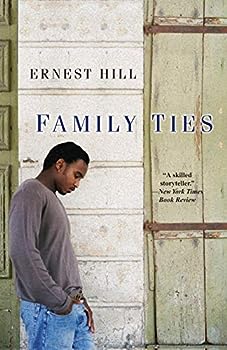 Everyone was shocked when Mr Henry took D'Ray Reid under his wing and treated him as a son. After all, Mr Henry's real son, Stanley, was murdered by D'Ray in order to save his brother, Little Man. Yet... This description may be from another edition of this product.

Not a Page-turner But Interesting Read!!!

Published by Thriftbooks.com User , 11 years ago
Family ties is an interesting, unpredictable read about a young black boy(D'Ray) that was trying to protect his younger sibling(Little Man) by murdering a teenage white boy, Stanley. After D'Ray's release from juvenile, Stanley's father, Mr.Murphy took D'Ray under his wing and forgave him for killing his only child. The story begins with the funeral of Mr.Murphy and Mr.Murphy's sister(Miss Big Siss) influencing D'Ray to go back home and visit his estranged mother. Reluctantly, D'Ray honored Miss Big Siss request. Unfortunately, D'Ray's homecoming was anything less than grand. Wouldn't it be great if we could choose friends AND FAMILY? The book was written in a unique way, it read like a skit, instead of a novel. It was written well, characters developed, but the excessive conversational style writing took away from the story. The book needed more storytelling. Family Ties wasn't a page-turner, but VERY interesting. Overall rating: 4.0

Published by Thriftbooks.com User , 11 years ago
`Family Ties' is the story of a young man, D'Rai who after going to prison for killing a young man and upon his release, lives with the family of the same young man, acquires a college degree and decides to leave and start a new life. He's persuaded by Miss Big Sis to return to his home to see his mother and his little brother, Lil' Man, only to find out that his mother doesn't want him there and Lil' Man is the subject of a statewide manhunt. Lil' Man has decided to flee and D'Rai tries to prove his brother's innocence. D'Rai accidently runs into the love of his life, Peaches who gives him an ultimatum, to convince Lil' Man to give himself up or their relationship. `Family Ties' is a remarkably believable, unexaggerated and unpredictable story of family, love and a look into the meaning of forgiveness and triumph. The story of how a family copes and supports each other (or not) through overwhelming adversity. `Family Ties is an exciting read and will grab you from the first page.The author, Ernest Wills gives a great example of a family who overcomes and when someone is truly `up against a wall'. The story of a son's relationship with his mother and his need to understand her indifference for him and her favoritism for his younger brother and the reasons why. I enjoyed reading `Family Ties', although the author wrote "Family Ties' with excessive dialogue, at times, and reads like a movie with subtitles. There's a minimal amount of description of the settings and surroundings or the characters. I would definitely recommend this book. Tanya Matthews AAMBC Reviewer
Copyright © 2022 Thriftbooks.com Terms of Use | Privacy Policy | Do Not Sell My Personal Information | Accessibility Statement
ThriftBooks® and the ThriftBooks® logo are registered trademarks of Thrift Books Global, LLC