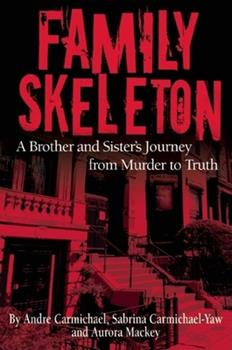 From childhood, Andre Carmichael suspected he had a twin, but his sister Sabrina consistently denied it. Then when Andre was 20, Sabrina told him she watched their abusive mother and older brother beat to death Andre's three-year-old twin, Latanisha, and hide her body in a bedroom closet, where it remained for two decades. Family Skeleton meticulously profiles the players in this horrific drama, while telling the story of the secret's revelation,...

Family Skeleton: A Brother and Sister's Journey from Murder to Truth

Published by Thriftbooks.com User , 13 years ago
The determination and bravery it took to uncover the truth about their sister's murder, and then to bring the murderers, their own brother & mother, to justice, reaches into your heart. Child abuse is epidemic in this country and not enough is being done to call attention to it, this book, by survivors, does that. I pray for the health, mental & physical, for the now grown children who went through this hideous life ordeal at such young ages, and lived not only to survive, but to bring justice for their sister. They are true heroes.

Published by Thriftbooks.com User , 13 years ago
Andre and Sabrina Carmichael lived through some very harsh and disturbing times. The fact that, after twenty years of fear, they were able to finally tell someone about it is a testament to the strength and courage they both had to have to endure. Madeline Carmichael had four children: Gregory, the oldest, Sabrina, and twins, Andre and Latanisha. At some point, things changed for Madeline. She became very abusive to the children and oftentimes used Gregory as her enforcer to help the younger ones behave. When the twins were around three years old, Madeline and Gregory beat Latanisha to death and disposed of the body as Sabrina and Andre watched. Carefully orchestrated abuse meant to instill fear was used to keep Andre and Sabrina separated so they would never talk about what they saw. Sabrina would live with the terrible secret and the harshest of treatment for twenty years. Andre, though too young to remember details, would always have the feeling that something was missing as he endured many beatings as well. Twenty years later, at the behest of Andre, Sabrina reveals the truth of that awful day. What unravels is a story of horrific proportions that leaves many wondering how these young children could have fallen through the proverbial crack. On their journey to truth, Andre and Sabrina relive the nightmare and lead authorities to the evidence they have lived with most of their lives. It all culminates into the arrest and conviction of their mother and older brother for murder. FAMILY SKELETON: A Brother and Sister's Journey from Murder to Truth is a shockingly frightening and mind-blowing portrayal of society at its worse. My heart becomes entrenched in the lives of these children and the horror they faced from someone who was supposed to love them. A government that was supposed to protect them failed in every sense of the word. Although justice was served, albeit late for Latanisha, Sabrina and Andre were able to find some healing for themselves. This true account is surprisingly told in way that flows perfectly, even though it comes from two different accounts. Aurora Mackey does an excellent job of bringing Sabrina and Andre together to tell Latanisha's story. Reviewed by Brenda Lisbon of The RAWSISTAZ(tm) Reviewers

Such an awful (most but powerful story)-it's hard to believe it is true.

Published by Thriftbooks.com User , 13 years ago
This is a true story about Andre and Sabrina's lives growing up who were scared, and kept a great big nasty secret for 20 years. Imagine going through life with something in the back of your mind that you remember but too afraid to tell anyone. Being isolated from the world and afraid to even go home after school. In New York a single mother, Mrs. Carmichael, was raising four children on her own. Gregory is the oldest boy, then Sabrina, and twins, Andre and Latanisha. When the twins were three and Sabrina eight, Sabrina witnessed her mother and brother Gregory beat Latanisha till she fell backwards dead. After trying to resuscitate her, they put her little body in a garbage bag and then into a trunk. The trunk was then put in the back of the mother's closet where it remained-never to be spoken of again. Both Andrea and Sabrina were abused over the years, and Andre is kept isolated at home. They are both scared of their mother and brother Gregory. Twenty years later Andre searches for Sabrina. He has known something was missing all these years and is most curious about his twin-an aunt claims he has a twin. After several attempts Sabrina tells Andre of the murder and where Latanisha's body still is. Sabrina is scared to go to the authorities for fear of their lives and their children's lives. Andre talks to a detective and then they go to the police. Andre and Sabrina take the stand at the trial against their own mother and brother. After being convicted and sentenced the mother still has no remorse or truth, and she takes it all to the grave with her. Aurora Mackey had read the story about the Carmichael family. It touched her deeply and she got in touch with Andre. After getting to know Andre and Sabrina, they became good friends. Sabrina and Andre told her she could write the book but it was to be Latanisha's story. After a while Aurora shares her own secret with them-about her fraternal twin, and that she understands how Andrea feels. After reading this book I had chills because the abuse is so unbelievable, not to mention the murder. Armchair Interviews says: Strong story that's sad-but-true real life.

From heart breaking to heart healing

Published by Thriftbooks.com User , 14 years ago
After finishing the story and closing the book I was left speechless. I felt a need to breathe deeply. I could not put this book down. It is a story of tremendous courage and strength in the face of horrific odds. It is beautifully and skillfully written and one understands only one person could have written their story for them and that is Ms. Mackey. As the story unfolds one can only imagine how incredibly difficult it must have been for this story to be told as well as written. This book first breaks your heart and then heals it as you read in awe of their incredible strength and courage. I strongly recommend reading this story, it is one you will never forget.
Trustpilot
Copyright © 2022 Thriftbooks.com Terms of Use | Privacy Policy | Do Not Sell My Personal Information | Accessibility Statement
ThriftBooks® and the ThriftBooks® logo are registered trademarks of Thrift Books Global, LLC