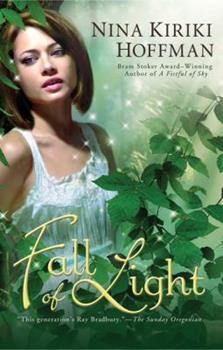 (Book #2 in the LaZelle Series)

The Bram Stoker Award-winning author of "A Fistful of Sky" presents her second novel, hailed as lyrical to the point of poetry . . . and replete with urban magic that seems . . . quite natural ("Sunday Oregonian").

Perfect for any science fiction or fantasy library

Published by Thriftbooks.com User , 12 years ago
Opal is a makeup artist working on location in Oregon, who uses her talent to turn Corvus into the Dark God, enabling him to vanish into the role. But when Corvus' acting turns too real, Opal suspects possession and a power from beyond the norm in this riveting blend of romance and fantasy, perfect for any science fiction or fantasy library.

Published by Thriftbooks.com User , 12 years ago
Lives up to Hoffman's usual excellence. I've been curious about Opal since she was introduce in "A Fistful of Sky." This book answers some Lazelle family dynamics questions and gives us a look into the world of make-up artists. Looking forward to the next book.

Published by Thriftbooks.com User , 12 years ago
She is magically gifted as are her siblings and her mother, but Opal LaZelle is the only one to leave the family nest to begin a career that uses her talent. She becomes a make-up artist, but she uses magic to create illusions of changing an actor's face or if the situation calls for it actually changes the feature for real. She is now in Lopez, Oregon working on the film Forest of the Night, but has only one person to work on, converting actor Corvus Weather into the Dark God The area where much of the movie is being filmed contains an opening in the woods in in which an ancient stone alter sits. When Opal walks on the ground near it she feels energy as if something is trying to wake up from a long sleep. However what frightens the make up artist is Corvus; whenever she changes him into his costume, his personality changes too as if he is possessed. He finally insists she call him by another name Phrixos and that he needs her help to fully awaken what lies in the woods. She wants to refuse as she worries about the day of because she does not know what the sleeping god really wants from humans. The latest Nina Kiriki Hoffman paranormal thriller (see FISTFUL OF SKIES, PAST THE SIZE OF DREAMING and A RED HEART OF MEMORIES) is sure to bring much acclaim to the author. FALL OF LIGHT is a fascinating urban fantasy with powerful horror elements threading throughout the exciting story line. Opal is a great heroine as she knows she is out of her league yet cannot walk away from the catastrophe she finds herself in the middle of as the immediate danger to the crew is stratospheric. This is another winner from a super writer. Harriet Klausner
Copyright © 2020 Thriftbooks.com Terms of Use | Privacy Policy | Do Not Sell My Personal Information | Accessibility Statement
ThriftBooks® and the ThriftBooks® logo are registered trademarks of Thrift Books Global, LLC