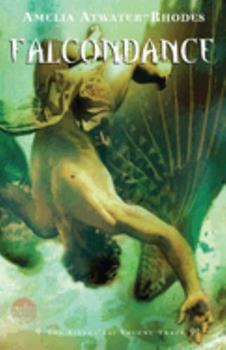 (Book #3 in the The Kiesha'ra Series)

Nicias has never felt completely at home among the avians and serpiente in Wyvern's Court, despite his loyalty to Oliza Shardae Cobriana, the heir to both thrones. He is a falcon, the son of two exiles from Anhmik-and images of this distant island have always haunted his dreams. But when Nicias's visions become more like reality, his parents have no choice but to send him back to the homeland-and a royal falcon-they've tried their best to forget...

Published by Thriftbooks.com User , 15 years ago
This was a very good book, too! In this book, some loose ends from the first two are tied up, and it explains quite a bit. I really enjoyed the suprise at the end. I would definately recommend this book, but with fair warning to read the first two before reading this one.

Published by Thriftbooks.com User , 15 years ago
I am an avid collector of all books by Amelia Atwater-Rhodes. She is maturing as an author from book to book. This book kept me interested and nothing "true" has a perfectly happy ending. It incorporated elements from the first two books and added complex elements to the plot line that is being developed. I look forward to the next book.

Published by Thriftbooks.com User , 16 years ago
Very well done. Perhaps a bit more darker than the previous two, and very much less romance. Someone was always falling in love in Atwater-Rhodes other two books. In this one, we are transported about 20 years in the future to the son of the two Falcon warriors. He's miserable and loney and when one day he nearly dies by crashing from the sky, he discovers he must go to the falcon kingdom (basically the enemies of his parents) to be tutored. I don't want to say more, since Atwater-Rhodes books are so short and concise. I would hate to give away the story. Of course I'm suggesting that you read it. It is obvious at the end of this one she plans to continue on. I'm looking forward to reading more of this strange world.

Published by Thriftbooks.com User , 16 years ago
I love to read kids books, am a fan of Amelia Atwater-Rhodes and an author in my own right. I liked the first two books in this series, but was pleased that the author took this book in a completely new direction. Like one of the other reviewers, I, too, was a bit disappointed in the ending, but it still deserves a five-star rating. She's a fabulous writer and her scene descriptions paint such a vivid picture I feel like I'm in the story. Great job!

A complicated and darkly suspenseful story

Published by Thriftbooks.com User , 16 years ago
FALCONDANCE is the third book in the Kiesha'ra series; the first two dealt with Danica Shardae and Zane Cobriana, shapeshifter leaders who marry to join their worlds in peace. The series left off with Danica being pregnant, but FALCONDANCE is not about Oliza, their child and heir. Rather, it focuses on Nicias, a falcon who is one of Oliza's sworn guards. Falcons are not looked upon favorably in Wyvern's Court, and when Nicias begins to experience falcon magic, he knows he must go back to the land of his ancestors to understand these strange new powers. What he learns there is that he does indeed have power and is considered of royal blood. This fact is both powerful and dangerous in the falcon world and back at home in Wyvern. Terrible things are in his history that forever have been wiped from the memories of his parents, exiles living in Wyvern. But once he knows the truth about where he comes from, he sees that the future of Wyvern's Court and Oliza are in danger unless he acts to ensure otherwise. Nicias brings a troubled woman back from Ahnmik, the falcon land, who is related to the serpiente. She could be a threat to Oliza but needed to go to Wyvern to survive. Her actions, and Nicias's, likely will be spelled out further in the next volume. Beautifully described settings and Nicias himself will draw readers into this complicated and darkly suspenseful story. Readers will need to follow along carefully as in any fantasy series. --- Reviewed by Amy Alessio
Copyright © 2020 Thriftbooks.com Terms of Use | Privacy Policy | Do Not Sell My Personal Information | Accessibility Statement
ThriftBooks® and the ThriftBooks® logo are registered trademarks of Thrift Books Global, LLC