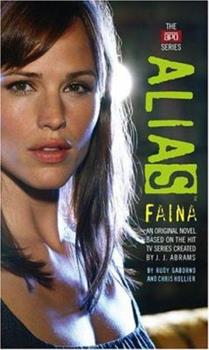 (Part of the Alias: The APO Series (#2) Series and Alias Series)

The abduction of a Russian controller and his teenage daughter by a ruthlessly professional terrorist threatens worldwide economic stability. Agent Sydney Bristow and the black ops unit APO are called in for the rescue. The stakes are high: they have less than forty-eight hours before the controller must deliver a speech crucial to the economic future of Russia and Eastern Europe. But sometimes even the best intelligence is incomplete. The true threat...

Published by Thriftbooks.com User , 15 years ago
CIA agent Sydney Bristow is on another challenging, highly impossible mission: to defeat fellow agent Michael Vaughn at Scrabble. Well, she was anyway until both of their beepers signal that Arvin Sloane has assigned them another deadly task. This time the former SD-6 leader wants them to go in with Agent Dixon and recover Russian Representative Anton Sorokin, along with his wife and daughter, Anna and Faina, who had been kidnapped by Victor Pushov, a sociopath "art expert" killer, formally associated with the KGB of Russia. As Sydney goes undercover as a Prague coroner, she's also battling with romance and family issues, but she can't let that distract her from unzipping Vaughn out of the black body bag that wreaked of dog and child waste, mainly thanks to the genius Marshall. To their despair, Vaughn and Sydney find that they are too late: Anna Sorokin had been killed. That means the seventeen-year-old Faina is still hostage. Just as they two loaded killers rapidly search the high security building full of corpses, Anton is being suited with a bomb to wear to the world oil meeting. Alias: Faina is a thrilling, suspenseful novel that outranks the original series. Besides the main mission, the females, Sydney and Nadia, are dealing with personal missions as well. Sydney and Vaughn used to go out, but when he was about to propose, he surprisingly turned and married another agent they worked with, whom he later left for Sydney. However, instead of the expected open arms to greet him, Sydney is having quite a few doubts, which Vaughn had proved during the mission, so she made a decision and planned to stick by it: if he didn't mature by the time the job was over, Vaughn would continue to be her co-worker...but nothing else. Nadia, the newest addition to the top secret CIA task force, was having a cold war with her long lost father and new boss Arvin Sloane, who once tricked Sydney, Marshall, and Dixon into working for the evil SD-6. He wants to spend more quality time with his newfound child, but Nadia can't seem to forgive him for all the malice he was responsible for. Of course, no one on the team blamed her. Naturally, growing up without a dad figure, she too wants to get to know the man, but right now, they'll just start with a dinner. The whole plot of the book has the ability to keep its audience flipping the page in order to find out what happens next to the young killers. It turns out that Faina, the Russian diplomat's teenage daughter, is Junebug, the notorious computer hacker in the world and was the one who Pushov forced to build the highly complicated and complex bomb system that was strapped to her father's body. After Sydney was able to intervene and jam the bomb, Faina knocked out Vaughn and tracked Pushov through the bomb signal that came from his jacket all the way to the airport. Just as the was about to push the button that would end the terrorist's life and the lives of hundreds of innocent flight passengers, Sydney finds F

Published by Thriftbooks.com User , 16 years ago
I thought this Alias book was good. Some parts of it were fantastic and some were just good. I liked how Sydney was trying to relate to Faina while the other operatives were just looking at her and seeing there mission. I am also glad that Sydney acted under an alias, the books seem more dull if she isn't pretending to be someone she is not. Over all I liked this book.

Published by Thriftbooks.com User , 16 years ago
This Alias book was okay. I laughed at some parts. The book was a little slow at some parts, but I could still not put it down. You also could see what was going to happen next. It did not have a lot of action because it was all one mission. I would read this book again, though.

Weak Writing but Engaging Second Half

Published by Thriftbooks.com User , 16 years ago
It doesn't seem like that unusual an assignment. A Russian controller and his family have been kidnapped 48 hours before he's to present a speech at an international oil forum. The CIA is trying to keep their distance, so Sydney and the gang at APO are called in to rescue the man in time to give his speech. Syd and Vaughn infiltrate the hiding place to perform the rescue, but are only able to find his daughter, Faina. Debriefing her, they learn the stakes are much higher then they could ever image and a race starts to prevent an international crisis. I was a little surprised when I learned that the novels would be jumping ahead from prequels (which I was enjoying) to the current setting for the show. Even more surprising was the increase in page count. Still, I settled in to enjoy a fun read. Unfortunately, the first half was rather poorly written. While the story moves forward well, the writing is extremely weak. I finally figured out it's because the story is told, not shown. We are told what characters are feeling instead of them acting it out for us. What's even worse, we are often told that character A knows what character B is going through. I was becoming very frustrated when I reached the half way point. From there, the book really picks up. It's basically one long mission, and the action moves quickly from character to character, filling us in on everything going on. At this point, I was frustrated every time I got interrupted and couldn't wait to get back to it. This book fits in perfectly with the first half of the season. Overall, it's a wise choice to move the novels to the current time so they can feature the characters and situations the freshest in the viewer's mind. Hopefully future books will have just a bit more polish to the writing.
Copyright © 2022 Thriftbooks.com Terms of Use | Privacy Policy | Do Not Sell My Personal Information | Accessibility Statement
ThriftBooks® and the ThriftBooks® logo are registered trademarks of Thrift Books Global, LLC