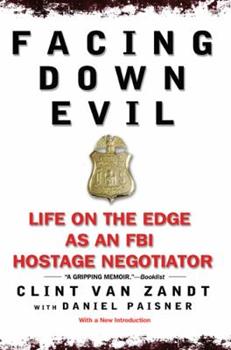 Facing Down Evil: Life on the Edge as an FBI Hostage Negotiator

The inside story of FBI negotiations by the only agent with the courage to tell it. The assault on Waco. The Oklahoma City bombing. The Covenant siege. The Unabomber case. They all have Clint Van Zandt in common-a seminal figure in the formation of the FBI's Hostage Negotiation Program who was immortalized with a fictional counterpart in Silence of the Lambs. In this revealing book, he draws readers deep into the private world of those negotiations,...

A Primer for Hostage Negotiations

Published by Thriftbooks.com User , 15 years ago
I enjoyed this book. I have great respect for the author's insight and experiences. His views into hostage psychology were enlightening for me and should be an eye opener for those interested in hostage negotiations. I found this book to be a very fast read and very interesting and while I found parts to be somewhat glib, it is recommended for those interested in the workings of the FBI and those with an interest in what the FBI does and the human feelings experienced in the performance of their difficult duties as FBI Agents.

Interesting view of the FBI Agent

Published by Thriftbooks.com User , 15 years ago
I really enjoyed this book and it had many interesting thoughts and details for someone looking to get into the FBI, like myself. However, I felt it layed a little too heavily on his family issues and Christian background. Not that I'm opposed to either, but I had assumed, by the synopsis of the book that the author would go into more detail about high profile cases he had worked on but did the exact opposite. He talked about cases that were probably least known to anyone reading the book. Still, it was a good read but don't pick it up if you expect to read about cases like the Oklahoma City bombing or the Unabomber.

Published by Thriftbooks.com User , 15 years ago
I recommend this book to any one who enjoys a true-to-life FBI drama. Each chapter told a different edge-of-your seat story about this author's fascinating life as a negotiator/profiler for the FBI. Exceptional book and a great read!

Published by Thriftbooks.com User , 15 years ago
"Facing Down Evil" is a legitimate, keenly observed look at the FBI and Hostage Negotiations by one of it's key players. Van Zandt brings a unique perspective of the Bureau to the page. He is real in his emotion and attitude and doesn't play the glory card so many others do in their memoirs. You actually feel as if you walk a mile in his shoes and it is a tough, yet gratifying path. Van Zandt succesfully intertwines stories of his personal life with his carreer and in doing so draws his audience in and keeps them wanting more untill the last page is turned.

Published by Thriftbooks.com User , 15 years ago
This is a fascinating look from a different perspective at some of the major FBI incidents spanning a twenty-five year career that ended in retirement in 1995. Clint Van Zandt provides a little background material about his growing up and makes no apologies for being a family man who loves his country and his agency. However, the autobiography takes off with the specific incidents including some overseas especially the more famous ones like the 1985 siege of the Covenant, the 1993 Waco confrontation with the Branch Davidians, the Unabomber, and his paradigm suggestion that Oklahoma City was tied to Waco not the Middle East. This is an excellent autobiography of a dedicated law enforcement official who spent a career FACING DOWN EVIL as it is the behind the scenes look at these cases and more that will grip the audience. Harriet Klausner
Trustpilot
Copyright © 2022 Thriftbooks.com Terms of Use | Privacy Policy | Do Not Sell or Share My Personal Information | Accessibility Statement
ThriftBooks® and the ThriftBooks® logo are registered trademarks of Thrift Books Global, LLC