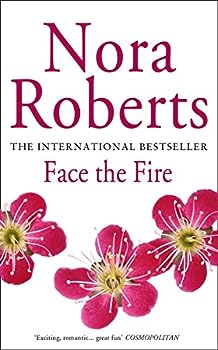 In the conclusion to her acclaimed Three Sisters Island trilogy, #1 New York Times bestselling author Nora Roberts masterfully evokes the quaint charm of New England, weaving a spellbinding tale of... This description may be from another edition of this product.

Published by FIONA , 6 months ago
The storyline started out interesting & well written & began to hold my interest until all the non-believable “witchcraft” dialogue appeared & spoiled it for me. It could have been a nice story without all that unnecessary nonsense on every page.. After glancing through the other chapters, i could see that this storyline was so far-fetched because of the witchcraft aspect, that i would not be interested in reading this book ~ and into the GOODWILL box it went (Good Riddance ~ & a waste of my money !!!).

Published by Carolyn , 3 years ago
This is a great find at Thriftwood books

Published by Thriftbooks.com User , 15 years ago
I love Nora Roberts books. I read this book so quickly. The relationship between the ladies in the book just kept my attention. I couldn't put the book down. I liked the way she interwined magic and a bit of romance in with the book. A great read all the way around. A real page turner.

candy's review: the book you shoudln't miss out on

Published by Thriftbooks.com User , 20 years ago
Face the fire is the last of the Three Sisters Island trilogy by Nora Roberts. Mia is the last of the sisters to undo the 300-year-old curse and prevent the island from tumbling down the sea. In this book, Sam Logan, her long lost love came back 10 years after the bitter break up. In this novel, when Sam bought the hotel, came back to the island and declared he was going to stay for good. Mia had a trouble getting used to the fact that Sam came back after 10 years without a word. She acts coldly towards him even though it hurts her and reminds her of the past. However, she and Sam ended up together but not in a relationship like they once were. At last, she finally lets herself love Sam again and saves the island from tumbling down the sea. I'd really recommend this book to 8th graders and above. Adults would also like this story for it has many elements in which they could relate to for example Mia is a thirty-year-old and the book would appeal to adults and relate to. The book more than teenagers would. I also recommend it to people who like magic and romance novels; you'll absolutely love this book. The story isn't difficult to understand. The characters in the novel experience romance, friendship, and basic self-conflicts that isn't boring. The way the author describes the surroundings and facial expressions are so clear and so easy to understand you'd lose yourself in the novel and sometimes convince yourself these people are real and the island in which the story takes place is true. In my opinion, it's a magical, mysterious, and romantic novel that you don't want to miss. What interested me the most is that Mia had been in the last two trilogies and little was said about her. The way the writer made her so mysterious to me made me want to curl up and read the book. However, I wouldn't recommend readers to read only this novel and ditch the first two books because you'd miss out a lot of things that started from the first two books. How the character got to know each other, how they lived and most importantly whom each character are like. In each trilogy, the writer focuses on one of the sisters and their task. If you didn't read the first two books, then you'd be pretty confused because of the relationship between characters.I wouldn't recommend is that book if you like to read serious murder books such as psychological thrillers and detective books all the time then maybe this isn't the book you'd want to read. The reason being is that there isn't much of a psychology talk or behavior in this book but in the first trilogy there are so maybe you'd want to read up on the first book and see if you like it. However, in this novel there are maddening elements in this book that may satisfy the murder addicts at some level. All in all, this book includes a bit of everything; Friendship, romance, magic, thriller, sex, and overall a really good book worth your while reading. However, for people who like romance, magic, and happy endings this is

DISTINCTIVE READING OF THIS POPULAR TALE

Published by Thriftbooks.com User , 20 years ago
Both a reader and director for Brilliance Audio, Sandra Burr offers a distinctive rendering of Nora Roberts's conclusion to her Three Sisters Island trilogy, "Face The Fire." The setting once more is a New England island where Mia Devlin has rebuilt her life after Sam Logon deserted her. He was, Mia believed, her true love with whom she shared such depth and passion that nothing could separate them. But leave her he did. Now, some years later Sam is the new owner of the only hotel on the island, and he returns to both twist the knife in Mia's heart and resurrect old feelings. As in her previous two novels Roberts peppers her plot with paranormal events: Sam is a witch, spells are cast, and magic holds sway. Fans of this author will relish the final book in her trilogy and wish for more. - Gail Cooke

Nobody Does It Better

Published by Thriftbooks.com User , 20 years ago
When Nora's at the top of her game, as she has been in all three books of the Three Sisters trilogy, nobody, but nobody, can beat her. "Face the Fire," the third and best in this saga about modern-day witches, is just perfect.In this offering, we get to know Mia Devlin, the third and most powerful witch, in a way we have not done before. Nell and Ripley and their husbands are in the story as well, and it is a pleasure to read about them again, but this is definitely Mia's story. It is up to her to turn back an ancient curse that threatens to send the entire island of Three Sisters (loosely based on Martha's Vineyard, I believe) back into the sea. The curse is deadly--and very strong. Both Nell and Ripley, in the two previous books, did their parts to weaken the curse, and now Mia must complete it.But it isn't that easy. As a sinister fog surrounds Mia and all that she loves, she must gather her power to fight not only the curse, but her own heart. For Mia's old lover, Sam Logan, has returned to the island after 11 years away. Is it her destiny to take him back? And if it is, can she overlook the terrible hurt he caused when he left her the first time?In the end, all is resolved in the most satisfying of ways. This is one of Nora's trilogies that has the reader begging for more, hoping against hope that Nora will continue the story into the second generation. She's done it before--I hope she does it again, because I hate to leave the Three Sisters behind!

Published by Thriftbooks.com User , 20 years ago
"Face the Fire" by Nora Roberts is the final instalment in the enchanting Three Sisters Island trilogy, which has captivated me from book one. Staying true to its predecessors, this final book does not disappoint. Full of vivid and insightful characterizations, steamy romance, and just the right dose of fantasy, "Face the Fire" will leave you believing in magic.Mia Devlin is a strong, determined, and savvy businesswoman and an immensely powerful witch. She has great friends, especially Nell and Ripley, her sisters of the heart and fellow witches, a beautiful home and garden, and a wonderful bookstore that does great business, but Mia isn't truly happy. Ever since Sam Logan walked out of her life eleven years ago, leaving her young heart in pieces on the ground, she has closed off a part of herself that she never plans to open again.Everything is going fine with her plan to keep her heart blocked off from ever being broken again, until the day that Sam Logan strolls into her bookstore and back into her life. But Mia greets Sam, who has returned to Three Sisters to reclaim her, with painfully polite icy indifference. For though the energy still snaps and sparks in the air between them, Mia knows she just won't survive having her heart torn out a second time.But Sam is here to stay, and he won't give Mia up without a fight. The interplay between Mia and Sam is expertly rendered by Roberts, as we watch Mia's range of reactions to Sam's persistence. When they are together, Mia and Sam all but send sparks from the pages, sometimes in passion and sometimes in pure frustration and anger. But no matter what Mia decides is in her heart, she had better do it fast, because the deadline for breaking a centuries old curse is mere months away. Mia can feel the evil forces hovering around the edges of her world, and if she doesn't win the fight against that evil, the people she loves will be in great danger, and the Island she so loves will fall into the sea."Face the Fire" is a fantastic read and I will most definitely read it again. It was wonderful to see lots of Nell & Zack and Ripley & Mac in this novel (the main characters from the two previous books in the trilogy). Mia is a wonderfully strong and courageous heroine who readers will become very attached to. And though it's fun watching Sam squirm when he first arrives on Three Sisters, he will win readers over with his sincere devotion to Mia and keeping her safe. This book is full of magic and romance, and contains a lovely tale of true love and destiny that I found irresistible. "Face the Fire" comes highly recommended, so buy it today!
Trustpilot
Copyright © 2022 Thriftbooks.com Terms of Use | Privacy Policy | Do Not Sell or Share My Personal Information | Accessibility Statement
ThriftBooks® and the ThriftBooks® logo are registered trademarks of Thrift Books Global, LLC