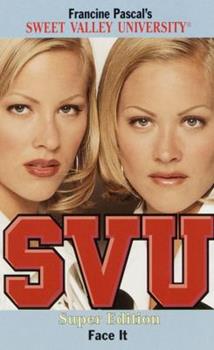 A cross-country trip is planned to get Jessica and Elizabeth's boyfriend, Sam, to become friends, but it might only drive them further apart.

Published by Thriftbooks.com User , 12 years ago
Finished the whole Sweet Valley University series.. took me about three years to find the whole series, but after reading it, I had a blast getting to know Jessica and Elizabeth throughout college. They had so many adventures, I felt I was right there with them throughout it all. Sometimes the series became a bit predictable, but nonetheless I loved it. SVU had a complete makeover after the road trip when the girls moved in to an off-campus house. At that time, we lost touch with Elizabeth's ex, Tom, Winston, Danny, Denise, and others. The one complaint I have is that the door is left wide open for those such as Todd who was struggling working instead of going to SVU, Danny who began a drug-habit after Isbella lost her memory, and Tom who turned into a complete JERK (which I hated.) I did like Liz and Sam to a point.. because it reminds me of something personal. But the way it ended was just cruel. I know it opens the way to "Elizabeth" (I just started this series.), but Jessica should have some common sense not to kiss Sam like that.. I think it completely erased everything Jessica was TRYING to do (by changing her personality) when that happened. Regardless, I love Sweet Valley. Will always be one of my favorite book series to read.

Published by Thriftbooks.com User , 20 years ago
Jessica is terrified that Elizabeth will sleep with someone who just isn't worth her virginity..Sam!!(I reckon Sam is a creep and do not know how Elizabeth stands him)so she devises a plan to brea the 2 up for good.But this may mean losing Elizabeth forever.The ending is very sad and marks the beginning of the silly "Elizabeth" series.

Ok, everyone! This is what I think!!

Published by Thriftbooks.com User , 20 years ago
Elizabeth: shouldn't have run off to London to solve a problem, though I understand exactly why she is so angry, and the new series is enjoyable.Jessica: Needs to stop being so . . . Jessica! We might have thought that she wasn't Jess-like anymore, but she is because she had the audacity to think of such a scheme, and she might have lost Liz, though I understand why she did it - SAM IS A CHEATER!!Sam: Well, I'm sorry to say it, but he's just not the guy for Liz, obviously. Anyone that would just write "sorry" and that's all in an e-mail is not worth it!Tyler: had every right to be mad at Jess, though maybe he might have understood where she was coming from a bit more if he had been a little more, um, open.Yes, that's what I think, but to form your own opinions, you'll have to read this book!By the way, question: Does anyone want Nick Fox, Isabella Ricci, and Winston Egbert back in the series, along with an explanation of how Nick faked his death? Just thought I might ask . . .hehe! Enjoy SVU!

Nick really SHOULD come back! That's a great idea & I agree

Published by Thriftbooks.com User , 21 years ago
Wow, I'm glad to hear that other people miss Nick Fox as Jessica's boyfriend. I agree totally. I am going to get this book at the bookstore soon, but I hope to also read a book in which Nick comes back. As for Sam and Liz, Sam is a nice guy at heart who I think does care about Elizabeth, but what about Tom and the way things used to be? Call me sentimental if you want to, but I just can't picture Sweet Valley without Tom and Liz together in some way. Remember, it's only been about 10-15 books since "You're Not My Sister"! I wish there was some way we could convince Francine to bring back Nick!

Thank God Some People Agree With ME!

Published by Thriftbooks.com User , 21 years ago
I am so glad there are other people who miss Nick Fox. I was really surprised when the author decided to kill him out of the series. He and Jess were the best couple and i really wished he would have stuck around. I haven't read this book, infact i stopped reading Sweet Valley University after Your Not Sister so i really have no idea who Sam or Neil are, but i was happy when I read the reviews of other people that said the author should bring back Nick Fox.
Copyright © 2020 Thriftbooks.com Terms of Use | Privacy Policy | Do Not Sell My Personal Information | Accessibility Statement
ThriftBooks® and the ThriftBooks® logo are registered trademarks of Thrift Books Global, LLC