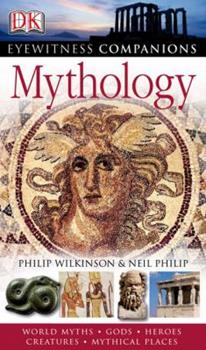 by Philip Wilkinson and Neil Philip

This description may be from another edition of this product. ll the major myths-from epics of love, adventure and heroism, to creation stories-are vividly retold and beautifully illustrated in Visual Reference Guides: MythologyIt's a complete who's who of the...

Published by Thriftbooks.com User , 13 years ago
I'm studying astrology and the myths play a huge part in the origins of the signs and planets involved in astrology birth charts. Knowing the myths helps to remember what each sign/planet means when interpreting charts. Also, as Richard Idemon says (author of Through the Looking Glass), each of us mythologizes our family system and each of us lives our lives according to our own social myths. To grow we need to understand what myths we are living. My friend said, "I have no idea what myths I'm living." I said to her, "Well, get the DK Mythology book and maybe you'll find out!" There is a brief intro to Mythology in the beginning. Myths are included from the classical world, Europe, Asia,The Americas, Africa, Oceania. There's a who's who in mythology and each myth has an explanation of the type/theme of myth, culture of origin, scene of the story, sources, & other names/equivalent deities from other cultures.Each myth is about 1 to 2 pages long. Short, but fun & very informative. After some myths, there will be a "related myths" at the end of the page so you can read a similar myth from somewhere else in the world. The book contains beautiful photos and artwork to illustrate each myth. These are what sold me as much as the myths themselves. The book is a very sturdy paperback that measures about 5"x9".

Published by Thriftbooks.com User , 13 years ago
This is another of those Eyewitness Companions gems. This time, the focus is on mythology. There are other works out there on the subject (Heck, I've even reviewed Bulfinch's Mythology!). But this offers nice coverage. As always with this series, the strength of this volume is the background that it provides and the breadth of coverage. This comes, however, with the disadvantage of not much depth. But that is the tradeoff of such a volume. The book begins by giving the reader some background on exactly what myths are all about. This, it does pretty well. The authors say (Page 14) "Myths are sacred stories. They tell of the creation of the world; the emergence of gods and the first men and women; the adventures of heroes and the audacity of tricksters; the nature of heaven and the underworld; and of what will happen when time comes to an end." But, again, centrally, there is a sacred quality to these stories. After its useful introductory segments, the book moves to a consideration of the Classical World, primarily Greek and Roman myths. Among the subjects (and this is one of my favorite sections in the book, as a matter of fact) are: birth of the titans, the gods of Olympus (a diagram on pages 40-41 is quite helpful), the Oedipal tragedies, the stories of Homer (with the Trojan War, the story of Odysseus' return to his home), the story of Aeneas and the founding of Rome, and so on. Then, the book moves to an analysis of myths in other regions of the world. For instance, Europe. Here, we encounter the Norse gods, such as Thor or Balder or Odin or Freyja. Myths from Asia, the Americas, Africa, and Oceania are also summarized. With many of these, one wants to read so much more about specific subjects. But then this would become a 1,000 page volume, would it not? There is a final section on "Who's Who in Mythology," focusing on "types" of characters. Creators and high gods? Zeus, Ahura Mazda, or Tohan. Or "Tricksters," such as Loki or Ahriman. And on it goes. So, another nice addition to this series.
Copyright © 2020 Thriftbooks.com Terms of Use | Privacy Policy | Do Not Sell My Personal Information | Accessibility Statement
ThriftBooks® and the ThriftBooks® logo are registered trademarks of Thrift Books Global, LLC