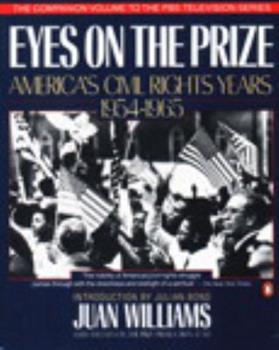 Eyes on the Prize traces the movement from the landmark Brown v . the Board of Education case in 1954 to the march on Selma and the passage of the Voting Rights Act in 1965. This is a companion volume to the first part of the acclaimed PBS series.

Published by Thriftbooks.com User , 14 years ago
This is a very good book on its own. But, as a companion to the series Eyes On The Prize, it's priceless. A book that should be in every american home. A part of United States history that should be required reading in our schools. Wake Up, America.

Published by Thriftbooks.com User , 18 years ago
By now the number of volumes written on the Civil Rights Movement could fill whole libraries. Yet fifteen years later, this book still stands as one of the best introduction to the early years of the movement. Books such as Taylor Branch's Pillar of Fire and Parting the Waters may cover the same era of 1954 to 1965; this book is a good introduction for those who may be intimidated by Branch's comprehensive volumes. Rather than trying to cover everything, the book takes its cues from the documentary series and examines a select set of pivotal moments of the movement: school desegregation, the Montgomery bus boycott, the march on Washington, the Selma to Montgomery march and others. Each chapter delves into the story of the events, but also fleshes out the areas between these momentous events, both telling the background and hearing the experiences of those there, in their own words. The book is readable, not the dry tone that many associate with history books. But most of all it gives the reader the chance to delve into an important part of American history in the second half of the 20th century. This is an excellent book that should be picked up by anyone wanting to get a sense of where America was moving in these pivotal eleven years.

Published by Thriftbooks.com User , 19 years ago
Great book ! I was born in 1957 so I wanted to learn about the Civil Rights Movement as it was when I was growing up. This is not only an excellent history, but an incredibly interesting story, and a shocking testament to the injustices the Black people have suffered in America. I learned a lot and gained some insight into this issue.

Eyes on the Prize

Published by Thriftbooks.com User , 22 years ago
A riveting book. I couldn't put it down. A very readable examination on the early civil rights years. I'd recommend it to any school.
Trustpilot
Copyright © 2022 Thriftbooks.com Terms of Use | Privacy Policy | Do Not Sell My Personal Information | Cookie Preferences | Accessibility Statement
ThriftBooks® and the ThriftBooks® logo are registered trademarks of Thrift Books Global, LLC