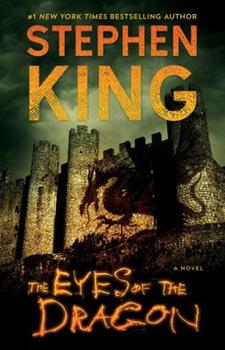 The Eyes of the Dragon

"It is just not possible to stop turning the pages" (The Washington Post) of this bestselling classic tale--an epic fantasy as only Stephen King could envision it. "Once, in a kingdom called Delain, there was a king with two sons...."

Published by hss29 , 1 month ago
I knew I didn't order a book in "pristine" condition, but did not realize that "used" meant I would receive a copy of the book with at least 1/3 of the pages missing.

Published by Scotty , 2 months ago
You can tell it’s written for kids which is kinda strange to say about a Stephen King book. But I enjoyed the character building and straightforward style. I got lost in the world and connected to the brothers. I could figure out what was probably going to happen but it’s engrossing enough that it kept me wanting to read all the way until it ended. A story that will stick with me.

The Eyes of the Dragon

Published by Beck B , 1 year ago
This has been my favorite book I have ever read. When I finished the book I was ecstatic and satisfied with the ending. I definitely plan on re-reading the book again sometime

This is One of my favorite books

Published by TARDISGirl78 , 2 years ago
including listening to the audiobook twice I have enjoyed this story 4 times since 2005. I am slowly collecting hardcover editions of my favorite books and i have actually been looking for this hardcover edition since high school when i read the first several pages in high school

This fantasy is King in my eyes

Published by Jeff Holloway, GA , 3 years ago
A fantastical fairy tale equal to the works of Tolkien, Thurber and Lewis. Gone are the horrors that excited my 16 year old mind and replaced with a Man in the Iron Mask-like story of a kingdom far away, a long time ago. Ever since I read my mother's copy of the Dead Zone, King has had me at full throttle waiting for his next novel or collection of short stories. Maybe someday, he'll give us more on Roland, his sons- Peter and Thomas, or the Wizard, the man in black, the apocalyptic demon- Flagg. Thank you for sending my long awaited hard cover copy. Was surprised I got it so fast!

Published by Jenn W. , 3 years ago
This book is one of my favorites and nothing like other Stephen King books (which I am too scared to read). It has pleasant little twists and is easy to get lost in. I even bought a copy for a friend to read!

Published by Thriftbooks.com User , 18 years ago
The Eyes of the Dragon tells a tale of of sibling rivalry set in a mystical and mythical kingdom called Delain. It's the story of old King Roland and his two sons, Peter and Thomas, and revolves around the wily schemes of the king's mysterious magician, who is plotting to destroy Delain. Stephen King usually writes incredibly long novels, sometimes with large casts of characters, but in this story there is a sharp focus on Roland, who is described as old, short, bow-legged, good at hunting (especially with his bow and arrow), proficient at drinking but not at thinking. He marries late in life to a young girl named Sasha, a bright and gentle person who gives birth to Prince Peter and Prince Thomas. She dies young, apparently from complications giving birth to her youngest son, but as King reveals, she is really murdered by order of the evil Flagg, the hooded and pale magician. But Flagg's agenda goes even further than the mere murder of Queen Sasha. He has been watching Roland's sons very closely, and has determined that Thomas -- who is the spitting image of his father down to his personality -- should be crowned king instead of his older brother Peter. You see, Peter is tall, handsome, bright, but most of all, he has a strong will and Flagg fears him. How Flagg achieves his goal of placing Thomas on the throne without killing Peter is the heart of this enthralling story, and I couldn't put it down. Although Stephen King is not an author I normally read, I was drawn into the intricatelly woven plot. I liked the way the writer described each character, giving them distinct personalities and avoiding the usual fairy tale conventions of making good people perfectly good, with no human flaws. I admired Peter for his resourcefulness and courage, I both chastised Thomas for his jealousy and weakness of character yet by the end of the story I felt sorry for him. I also had the same mixed feelings about Roland. Yes, he tried to be a good king and didn't do much harm to Delain, but like his son Thomas, he wasn't very bright and was easily led by Flagg.The character I most felt strongly about is, of course, Flagg. Having seen the miniseries based on King's huge novel The Stand, I know that this demonic villain is the same character who is the "Dark Man" who will try to take over the world after most of humanity is wiped out by a strain of killer flu. Here he is in most of the story, and we learn that he thrives on death and destruction even as he lives over many centuries. The Eyes of the Dragon is beautifully illustrated by David Palladini with pencil and ink drawings that will make this fascinating story come alive for younger readers. (I believe that although King's narration was in itself very vivid, the art work really was a pleasant bonus.)

Published by Thriftbooks.com User , 19 years ago
This is a strange fantasy/fiary tale from King, and even though it is almost completely dissimilar from his other books, its still equally sucessful. It's a rather basic story. But then, that fits with exactly the type of story it is. A fantasy fable of the kings/princes/magicians type, with intrigue, romance and adventure thrown in. It centres mainly on the plot of the dark magician Flagg to throw the Kingdom of Delain into turmoil, by killing the King anf framing the eldest son, thereby leaving the throne open to the younger heir, who he has shaped over the years so that he will have greater control over the land. But, there is still a loyal band of followers who believe the natural heir is innocent...and all the while he himself, incarcerated in the top of the Needle, a huge tower, is plotting his escape to prove his innocence...There's little to surprise here, and the basic story is slightly predictable, but that doesn't really matter. It's a marvellous piece of escapism, rather like reading a Disney film. It's got all your classic fairytale elements, and its written in a wonderfully easy to read style. This book, probably more than any other he has written, proves what a born storyteller King is, because the entire driving force behind the book is the fact that it is unashamedly a STORY, and nothing less. The narrator, whose occasionally steps in, is a wonderfull omniscient presence, and its almost certainly like King is actually sitting right there with you, telling you this story to you, of a chilly night by the fire. Not too challenging, but a fast pageturner, i would reccomend this to all readers who love the escapism of a wonderful story. You certainly don't have to be a King fan to love this book.

Published by Thriftbooks.com User , 21 years ago
Dragons and wizards; heroes and villains; enough to satisfy any of you who hunger for an escape to a medieval fantasy world. A far cry from the usual horror genre for which King is so well known, this book combines realistic scenes as well as a fantastic atmosphere which makes it very enthralling. That the chapters were out of chronological order took a bit away from my rating of this book because it made the story line a little harder to follow. Some characters such as the evil magician, Flagg, could have been enhanced in visualization through the act of giving more information about his past other than the fact that he destroyed the kingdom 300 years before. On the other hand, his use of character development made a man so reviled by the characters in the story become the object of the readers' sympathy. As a lover of all things fantasy, I found this book almost impossible to put down and I suggest to any who read it that they do so in a short period of time in order to take in all their surroundings and pieces of information in prospective. Not being an avid reader of Stephen King's books but hearing much about them and how this book was "different," I did not know what to expect when I picked this book up. However, King managed to weave an intricate plot which blew me away as I was not expecting such a detailed story coming from such a simple idea; good versus evil. Overall, this is a great literary piece and a must-have for those with a love for the fantasy genre.

A Literary Classic By An Incredibly Versatile Author

Published by Thriftbooks.com User , 22 years ago
I never thought that the word "classic" could be applied to anything written by Stephen King, but Mr. King has once again outdone himself with this incredibly enjoyable novel.In this novel he moves from his popular horror novel formula to a medievel type story, realistic but also full of magic. The plot more than matches the setting- it is complex but great, and in the end it all comes together to form an unforgettable climax.This book is a great fiction read for fantasy fans- the medievel world in which it is set is classic, but the characters are very deep and realistic. Stephen King creates a world that is fantastic, wonderful, eerie, and sometimes macabre without losing any of the the story's validity. It is an enthralling tale of deceit, control, power, rebellion, and friendship. It'll keep you up all night, and believe me, you won't regret reading it.

an unusual fantasy that is so deeply cool

Published by Thriftbooks.com User , 24 years ago
This is actually the only Stephen King book I have ever read, and I read it because, well, someone just sort of dropped it into my hands and said, "If you like fantasy, READ THIS." With some trepidation, I did. Whoa, Nelly. From the start, with his interesting way of just announcing heart-stopping twists and then going back to explain them, King's prose grabs you and pulls you into to the fantasy kingdom of Delain. I had no idea King could be so adept at character generation, but the people in his novel are wonderfully alive, and, whatever they're doing, whether it's peeking through the eyes of dragon to watch the villain bring the king his poisoned wine, dog-sledding over a snow-covered landscape, or hatching a daring plan to escape imprisonment from a high tower, you're WITH these characters all the way. And, baby, let me just tell you, the wizard Flagg is just the coolest villain I have ever had the pleasure to read about. He's crafty, he's vengeful, he's soooo deliciously diabolical. Well. I was pleasantly surprised to have been proven wrong about Stephen King and I will gladly read his other works, now. And for "Dragon"...if you like fantasy, READ THIS!
Trustpilot
Copyright © 2022 Thriftbooks.com Terms of Use | Privacy Policy | Do Not Sell or Share My Personal Information | Accessibility Statement
ThriftBooks® and the ThriftBooks® logo are registered trademarks of Thrift Books Global, LLC