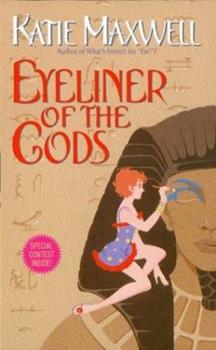 Eyeliner of the Gods

This companion book to Naomi Nash's Chloe, Queen of Denial relates Jan's side of the story about the archaeological dig in Egypt with that pushy Chloe, the cursed bracelet, and the hottie who makes her toes curl.

One of her best

Published by Thriftbooks.com User , 13 years ago
This is one of the first Maxwell I have read, and I have to say it is still my favorite. Especially when combined with the sister book Choel Queen of Denial by Naomi Nash. You can't compare it to any of her other books, because they are nothing alike, this books stands alone among her rest and it does a fine job doing so!!! Highly recommend

Published by Thriftbooks.com User , 16 years ago
January James thinks herself as bland compared to the rest of her artistic family. She wants to be a journalist and travels to Egypt looking for a good story. She's never had it good with guys because they tend to focus on her boobs instead of Jan herself When her trip in Egypt begins, she meets a mysterious hottie named Seth, who tells her he's the reincarnation of Set, the Lord of Chaos. January ends up with a cursed bracelet and she tries to find the thief who stole it from the tomb. She soon engages herself into a huge crush over Seth but then has several doubts as she finds him kissing a lip-gloss obsessed girl named Chloe and a perfect goody-two-shoes named Izuma. This book has some HILARIOUS scenes and you'll just laugh yourself to tears.

Published by Thriftbooks.com User , 17 years ago
I was so excited to see another book by Katie Maxwell--I love her Emily series. I had been in the airport's book store, trying to find something to read during my flight. I found two books--Eyeliner of the Gods, and the first of the Barry Trotter series. I haven't read the latter yet, probably because I've already lost it. But Eyeliner of the Gods...I really, really liked that book. I don't feel much like going on about what was IN the book, just mainly how it affected me as a reader. It was a really, really good book--Well written, with only ONE typo ('heard' instead of 'heart')...Which is good, I think. And the characters are great--January shows that you don't have to be the thinnest, most gorgeous girl to get the totally scrumdiddlydumptious guy. Which Seth is, by the way. Completely gorgey. But anyway...It's a great teen romance novel, completely appropriate for our age. If I had to pick a range that it'd be suitable for...I'd have to say 14+...I know that's not exactly a range, per se, but I definitely think that's about right. Alrighty, I'm done. I can't wait for the next book in the Emily series!

Teen Fiction At It's Best

Published by Thriftbooks.com User , 17 years ago
Sixteen-year-old January James is ecstatic to have a once-in-a-lifetime chance to leave Seattle, and head for the Sahara Desert, where she will be working side-by-side with real life archaeologists. I mean, it's not like Jan plans on being an archaeologist, she plans on being a journalist, but going on this dig will look great on her college resume, and will give her a chance to see what it will be like when she has to head out on assignments in the future. Of course, Jan has no idea that she will be entirely stranded with an annoyingly pushy girl named Chloe, an absolutely gorgeous hottie named Seth, and a cursed bracelet. Who knew that a great opportunity like this would turn into such aggravation? Katie Maxwell, one of the new queens of teen fiction, has managed to do it once again. While her infamous character Emily (from THE YEAR MY LIFE WENT DOWN THE LOO, and other titles), isn't featured in EYELINER OF THE GODS, Maxwell has created a new character that will keep Emily fans begging for more. January James is a determined, yet lovable character, who will have readers rooting for her from the opening sentence to the closing one. I look forward to reading more about January in the future, and am ecstatic to to read CHLOE, QUEEN OF DENIAL, the companion to EYELINER OF THE GODS, written by Naomi Nash as soon as possible. Erika Sorocco Book Review Columnist for The Community Bugle Newspaper

Published by Thriftbooks.com User , 17 years ago
January James, called Jan by her family, arrives in Egypt as one of a group of teens volunteering for an archaeological dig. Jan is part of a family of ten children, but she has always felt out of place, because all of her brothers and sisters have artistic talent, while she doesn't. From the time she arrives in Egypt, her trip is off to a bad start. Then she meets a cute but mysterious guy named Seth, and also finds herself saddled with a "cursed" bracelet. There's also a pushy girl named Chloe who is also part of the dig, and is trying to steal Seth from Jan. This book was another cute, funny read from Katie Maxwell, and I highly recommend it to teen readers.
Copyright © 2020 Thriftbooks.com Terms of Use | Privacy Policy | Do Not Sell My Personal Information | Accessibility Statement
ThriftBooks® and the ThriftBooks® logo are registered trademarks of Thrift Books Global, LLC