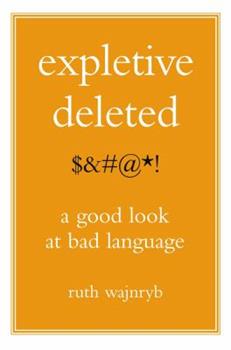 Have we always "sworn like sailors"? Has creative cursing developed because we can't just slug people when they make us angry? And if such verbal aggression is universal, why is it that some languages (Japanese, for instance) supposedly do not contain any nasty words? Throughout the twentieth century there seems to have been a dramatic escalation in the use and acceptance of offensive language in English, both verbally and in print. Today it seems...

Wajnryb should have her word processor washed out with soap.

Published by Thriftbooks.com User , 17 years ago
But this book is one f***ing good read!

Swearing Seriously Studied, but Fun, Too.

Published by Thriftbooks.com User , 17 years ago
There can be no more gleefully erroneous title for a book than _Expletive Deleted: A Good Look at Bad Language_ (The Free Press) by Ruth Wajnryb. In Wajnryb's book, the expletives are decidedly not deleted, although in this review, proper fellow that I am, I will try to avoid the worst ones. Thus every member of George Carlin's infamous list of the seven major words you can't say on television is here, along with lots of others, plus some guest appearances by swear words of other languages. There is plenty of sexual language, of course, but there is little titillating here. Though Wajnryb is a witty writer and puts in many good jokes of her own and others, this is essentially a serious study. Wajnryb, after all, is not a stand up comic like Carlin, but a linguist who sometimes has to explain, with as little apology as possible, that bad words are a proper subject of academic linguistic study. For instance, she writes that it might be mysterious that anyone would want "... to get into the grammatical knickers of cross-cultural swearing is anyone's bet, but linguists do things like that." She delves into details of that particular aspect of bad language, and many others, and entertains throughout. Why do we swear? Wajnryb does not want to consider the question other than linguistically (not, say, psychologically), and sees swearing as a meaningful use of words, a use which has characteristics and patterns. In other words, it has meaning and it has uses. One use is catharsis. Stub your toe, and you are likely to say a swear word loudly, even if there is no one else at home. The same words that might be used for a stubbed toe, however, can be used against other individuals. This is abusive swearing, and it was examined by (of all people) the poet Samuel Taylor Coleridge. A completely different category of swearing (Coleridge didn't get around to this one) is social swearing. The more relaxed a group is, and the less mixing of sexes within in, the more likely the participants are to use swear words, not in shock or anger, but just as a sort of a social lubricant. It is playful and jokey. Many of Wajnryb's examples come from her native Australia, where they are much more likely to use the term "bloody" than we are, and an example of such swearing is an "infix", a technical linguistic term meaning that the swearword is inserted into another word for emphasis: one mate might reply to another when asked if he wants a drink, "Abso-bloody-lutely". Among the most interesting aspects of swearing that Wajnryb describes is our clever capacity to get around it. We have rightly come to see as stupid the do-gooder efforts of such prigs as Thomas Bowdler, who wanted to make Shakespeare's words safe for children, but we still find ways to swear without swearing. As the taboo on "the" word has been reduced, so, too, has the number of asterisks risked in print; "f***" became "f**k", then "f*ck" and now is regularly written in full. Blanks are o
Trustpilot
Copyright © 2022 Thriftbooks.com Terms of Use | Privacy Policy | Do Not Sell or Share My Personal Information | Accessibility Statement
ThriftBooks® and the ThriftBooks® logo are registered trademarks of Thrift Books Global, LLC