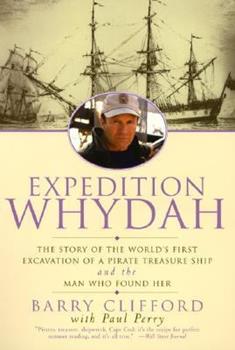 A Captivating Account of the Golden Age of Piracy, the Search for Sunken Treasure, and the Business of Underwater Exploration Bored by his successful life and obsessed with a boyhood dream of lost pirate treasure, Barry Clifford began a quest for legendary pirate Black Sam Bellamy's ship Whydah, which had supposedly wrecked off the coast of Cape Cod more than two centuries ago. Ignoring claims that he was a fool and a dreamer, Clifford pressed on,...

Published by Thriftbooks.com User , 18 years ago
Like pirates? Like pirate history? Run right out and buy this book ASAP! I *loved* this book, and read it straight through in two sittings. It follows the trials of Barry Clifford in his decades long search for the Whydah Galley shipwreck off the coast of his Cape Cod home, and final outstanding success in his quest. The book offers *so* much engrossing information about both modern privately-funded marine archaeology (sometimes dismissively referred to as "treasure hunting" by academics) and the life of Black Sam Bellamy, Captain of the Whydah. The book is peppered with maps, photographs from the search and excavation, and careful line-drawings of the artifacts exhumed with accompanying descriptive text.This is not to say the book is without fault. At times it is painfully obvious that Clifford's skills lie in other realms than the writing world and the guiding hand of co-writer Perry is either absent or inebriated--at times the prose can be a bit amateur and elementary. I question the quality of editing that went into the work as well, since in places a topic will be "introduced" as if it were new to the reader, when in fact it had already been mentioned in an earlier chapter. And, Clifford's private-archaeology cheerleading can at times seem a bit shrill in his repeated justifications of his work in the face of extreme criticism by the academic realm [1]. And,... the book is a bit dated in its claims of "the only pirate ship ever recovered", since the discoveries (largely by teams led by Clifford) of a number of other pirate shipwrecks have happened since its publication.Despite these flaws, the book remains an engrossing read. Clifford and Perry have imbued the text with Clifford's infectious enthusiasm and passion for the life of Bellamy and the search for the Whydah. The story of the search, discovery, and excavation of the wreckage (as well as the financial and legal woes that plagued them from the beginning) is interwoven with legends and factual details about Bellamy and the Whydah crew from the exhaustive research of the Whydah team's staff historian. The book offers an interesting interpretation of the pirate crews of the era as renegade democracies, pioneering a 'rule by the people' culture in revolutionary dispute of crown rule several decades before the American Revolution (at times this verges on a sort of fannish apologist tone, which didn't bother me too much as a reader, being a fannish pirate-apologist at times myself). The book becomes a bit sensationalist toward the end when it delves into a few 'pirate ghost' encounters that Clifford and his crew experienced, but by that point I believe his dedication in relating the story and I think his dedication to the importance of legend and myth as being as integral a part of the appeal of the golden age of piracy as the cold-facts history, that it doesn't come off as corny or insincere.

Published by Thriftbooks.com User , 22 years ago
This book is a must for any fan of pirate lore!Barry Clifford and Paul Perry did a great jobof making you feel like you were on the sandyshores of the cape, looking out at the poundingwaves and staring at this long gone ship through the myst. A great tale of Barry Clifford's devotion of life and soul to finding the wreck of the Whydah. The book covers everything from thehaunting legends and myths of past pirates, to Barry's dealings with the archealogical boards to obtain permission to excavate the site in which he believed to cover the ship. A great story of oneman's determination against all odds to findin himself the limits of how far one will go to achieve that which is considered unattainable. Enough said, the book is totally enjoyable andnever lets up!

A great combination of mystery, adventure and history.

Published by Thriftbooks.com User , 22 years ago
Barry Clifford and Paul Perry have written an absorbing account of the world's first excavation of a pirate ship -- the 'Whydah', wrecked off the tip of Cape Cod in a gale in 1717. Clifford's efforts to first locate and then recover her treasures from a sandy grave is an engrossing tale seamlessly combining mystery, adventure and even history. Indeed, "Expedition Whydah" is filled with fascinating historic background details of piracy as a career and a way of life in the late 17th and early 18th century. I had no idea, for instance, that privateers such as Edward Teach (the infamous 'Blackbeard') and others were given financial backing by none other than the likes of Queen Elizabeth I as an investment opportunity. At one point early in the account, Clifford says that if he'd known at the outset what was going to happen in terms of legal battles, financial wrangling, disloyalty of friends during his quest to unearth the wreck....he would have marked the site of the Whydah on his chart and called it a day. We can only be glad he persevered. The treasures and artifacts that Clifford and his crew recovered are priceless. The book is, in its own way, another kind of treasure as the authors not only recount the discovery of the wreck of the Whydah, but also recreate what it must have been like to stand on the pitching deck of the pirate vessel that stormy April night nearly three centuries ago.

Published by Thriftbooks.com User , 22 years ago
In my next life, I want to be Paul Perry.Look at everything he has done: he has written a biography of Hunter Thompson, wrote "Saved by the Light" (one of the greatest stories ever told), and did all of those other books about near death experiences. And now this, a book about the only excavation of a pirate ship.This is a great book for a lot of reasons. For one, Barry Clifford is such a colorful character, kind of a real world Indiana Jones. Born on Cape Cod, he was raised with the story of Black Sam Bellamy, a pirate who feel in love with a local girl named Maria Hallett and went off the find booty in the Caribbean. He found plenty of it, and loaded it onto a captured slave ship (the Whydah) before sailing home to marry Maria. He died in a storm that also took most of his crew and tons of gold and silver to the bottom of the ocean.This story haunted Clifford through the years, until he finally decided to search for the sunken treasure ship. He found way more than he bargained for, including trouble on land as well as sea. He also made discoveries that made the entire treasure hunting foray worthwhile: gold, silver, cannons, human bones, a piece of the hull and a textbook full of valuable information about the identity and nature of pirates.This is a beautifully presented book, one that is written well and contains a wealth of photos and illustrations that are a feast for the eyes and mind of hungry readers.My question now is this: What are you going to do next, Paul?

This is a super book!

Published by Thriftbooks.com User , 22 years ago
If you're like me and you thrilled to accounts of pirates and blood and thunder on the high seas when you were a kid, this book will get your pulse racing. It's not only an intriguing tale of Black Sam Bellamy, one of the most fascinating buccaneers ever to sail the Spanish Main, but a modern adventure tale about the finding of Black Sam's treasure. Treasure-hunter Barry Clifford--a tough ex-athlete with a nose for lost artifacts--and co-author Paul Perry, a member of the expedition, lived out a story that will capture the imagination of any adult trapped in the blandness of a high-tech world. Clifford became fixated on finding the Whydah, an English slave ship commandeered by a pirate crew under Bellamy that had sunk in a ferocious storm off Cape Cod in 1717. It took Clifford years of struggle to do so--raising the money to back his venture, fighting with gold-crazed partners, dealing with so many failures that it seemed the ghosts of the dead pirates were out to defeat him. The book is packed with photos and drawings, recreating for the reader not only the swashbuckling era of piracy but the life of a present-day Indiana Jones who wouldn't be stopped until he plumbed the secrets of the deep.
Copyright © 2022 Thriftbooks.com Terms of Use | Privacy Policy | Do Not Sell My Personal Information | Accessibility Statement
ThriftBooks® and the ThriftBooks® logo are registered trademarks of Thrift Books Global, LLC