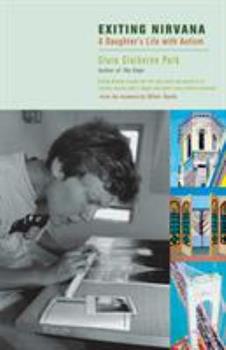 Exiting Nirvana details Clara Claiborne Park's continuing efforts to have her daughter Jessy 'exit Nirvana, ' develop as an artist, and connect with our world.

Published by Thriftbooks.com User , 18 years ago
Exiting Nirvana" is a mother's account of her autistic daughter, Jessy, and Jessy's life from her teens until the time the book was was published, when Jessy was in her early 40s. I found that the way the chapters of the book were presented was a little bit odd. Instead of starting with Jessy's teens and moving forward, showing her progress that way, the author divides the chapters into aspects of Jessy's behavior and life: i.e., the way Jessy talks and the ways she thinks. I found that some of the chapters seemed to be haphazardly written. Ideas didn't seem to flow easily from one paragraph to the next and were hard to follow. The author spent a lot of time discussing Jessy's obsession with numbers and this portion was especially confusing. I wasn't sure exactly what point the author was trying to get across...other than the fact that Jessy was obsessed with numbers and tended to look at the world that way. Later chapters, however, were quite well written, and I think the author had easier time discussing Jessy's life when Jessy herself was easier for the author to understand.In many ways I thought the book was too short. I wanted to know more about Jessy, particularly about how she interacted with her father and her siblings, which the author barely touches on. We know that Jessy has siblings, but how Jessy fit in with them and interacted with them is rarely mentioned. There is a brief mention of Jessy moving the family cat's water dish, but that was the only clue that the family had any pets, so I was also left wondering how Jessy interacted with the family's pets.However, I do think that "Exiting Nirvana" is helpful in understanding the way an autistic mind works, and is an interesting read for that alone.

Great to learn more about autism

Published by Thriftbooks.com User , 20 years ago
Existing Nirvana: a daughter's life with autism, by Clara Claiborne Park, is a book about Jessy, the author's daughter, growing up with autism. Although it would seem to be hard growing up with autism, rather than focusing on the negative, Park shares the story of her daughter focusing on her differences from `normal' people in society and stressing the remarkable progress Jessy has made despite her abnormalities. This progress has allowed her to mentally and socially move more and more from her own world, `Nirvana', into the world in which everyone else operates. By giving an account of Jessy's life, the reader becomes more aware of the disability and its characteristics. The book focuses on they way individuals with autism think and even their speech. The speech portion of the story is more focused on Jessy specifically because her speech was worse than most individuals with autism. Park uses journals and pictures Jessy has drawn to looking deeper into her speech, thought process, portraits, and her current living. Through these different aspects, the reader becomes enlightened on the type of characteristics that define autism. One of the many strengths of Exiting Nirvana is that readers receive an accurate account of autism by the specific analysis of the way individuals with this disability think and respond to situations. In addition to this, it shows the possible personal growth from childhood to adulthood of someone with autism. One of the weaknesses is that Park does not focus on Jessy's negative qualities. Although they are not totally ignored, the book idealizes autism by continually expressing Jessy's happiness. "She is still happy. I can't think of another woman in her forties who is more content with who she is, less likely to question how she lives or what she does" (Park, 9). The struggle of having a child who is autistic is not emphasized to the extent that it probably exists. This is partially because Jessy has showed so much improvement as she has grown up. Besides the idealism of the parenting necessary with autistic children, Exiting Nirvana is a great book to learn more about autism and the impossible improvements by looking at an actual person's life.

Published by Thriftbooks.com User , 21 years ago
Clara Claiborne Park describes her daughter Jessy, an autistic woman in her 40's and discusses how her daughter has changed in the years since she wrote The Siege: A Family's Journey into the World of an Autistic Child, which ended when Jessy was 8. The book is an eloquent argument for the education of autistic children, and a detailed glimpse into the family life of an autistic person. Park describes different aspects of their life in a matter-of-fact manner-- no whining or victimhood here. Her love of Jessy is obvious, and there is no complaining, but it becomes obvious through the descriptions of Jessy's behavior and personality that their life has been difficult. It's also obvious how well Jessy has been cared for and loved. It's refreshing to read this book because the Park family just seems so, so good, and that's unusual to come across these days.Parks is a great writer-- the book is intelligent and readable. I'd recommend this book for any family with an autistic child, and for anyone who is just interested in thinking about how love, personality, and intelligence relate

Published by Thriftbooks.com User , 21 years ago
This is a wonderful sequel to her earlier book, The Siege. I enjoyed being able to follow her daughter's life and see how it all turned out. Clara Park writes about her daughter with so much love and insight into all the positives and negatives of raising a challenged child/woman. Yet she so clearly admits there is so much they will never understand. I would have liked to have seen more written about how the rest of the family interacts with Jessy - the focus is somewhat narrow. Recommended for any parent or person that works with others with any type of disability. This book will heighten your sensitivity!

An honest, not sentimental, look at an autistic's world

Published by Thriftbooks.com User , 21 years ago
I read an excerpt of this book in Harper's magazine before I found the book itself and was mesmerized by the account of living with an autistic child - written by of the parent of one. It is clear that Clara Claiborne Park, the mother of Jessy Park, has also tried to understand her daughter's perceptions of the world, at least as much as any non-autistic person can, and to reveal that world to "outsiders" (those with no first-hand experience being with an autistic person). She has done an admirable job. I've read quite a bit about autism and autistic children and this book ranks among the best. In addition to her own feelings, Jessy's mother uses Jessy's own quotations and poems to try and help others understand her daughter's world. Like another relatively well-knonw autistic, Temple Grandin, Jessy is a "high-functioning" autistic. She can hold down a job, she has had art exhibitions of her drawings and she attended school for many years. Still, her world is far from what most of us would call normal and her social interactions with people outside her family are still rather limited. She has trouble with unexpected changes in her usual routine and she has never fallen in love, at least not with another person. She sees the world in minute detail in some areas, creating drawings that are extemely precise and accurate, and yet fails to grasp the subtle nuances of social give and take, the emotional vocabulary so many of us take for granted. What I found particularly fascinating about this book was the way it changed my perspective about what normalcy is. If you read this book, would strongly recommend getting a look at Jessy's drawings wometime, whether at an exhibition or however else you may find them (perhaps searching down that back issue of Harpers; wish I remembered the issue off the top of my head). Her drawings of routine objects, particularly houses, are striking for their attention to detail and a shimmering vibrant sense of color that goes beyond simple copying of what is in front of her eyes. I wish I could see the world as she does for just one day, not because it would be better than the way I see the world now, not because I have any romantic illusions that the autistic leads a charmed life (no one reading this book could feel that way) but because I would like to know what that world was like, in all its beauty, pain and alienation.
Trustpilot
Copyright © 2022 Thriftbooks.com Terms of Use | Privacy Policy | Do Not Sell My Personal Information | Cookie Preferences | Accessibility Statement
ThriftBooks® and the ThriftBooks® logo are registered trademarks of Thrift Books Global, LLC