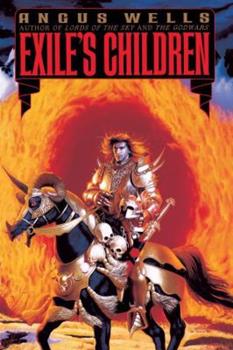 (Part of the Exiles Series)

Part One Of The Exiles Saga In the peaceful land of Ket-Ta-Witko, the People have lived for generations in harmony, kept from trouble by their Seers' guiding dreams. But not even those talents are proof against the powers of love and love thwarted. When a blood feud escalates into violence, the People find themselves beset by a race of implacable demons, intent on destroying everything they hold dear. And their one chance at redemption lies worlds...

Published by Thriftbooks.com User , 15 years ago
I have enjoyed Angus Wells work for quite some time. I only wish he was as prolific as the late David Gemmell. In this story, we have a fantasy world that in many ways can be compared to the Spanish/British colonization of North America. But with wells, you always have more. Throw in some magic and an unstoppable alien enemy army named The Breakers, and you have this story. The writing is top notch as always. The characters are interesting as well as the events. The story is basically divided into 2 parts covering the colonists and the natives. You know the stories are going to intertwine, but you don't find out how until the end. Mr. Wells doesn't jump back and forth each chapter. Many times you will go 4 chapters on 1 set of characters before he gets back to the others. Some may not enjoy this style, but the story wasn't overly complex and I never lost my place with either story. I am eagerly getting ready to finish the story with Exile's Challenge.

Published by Thriftbooks.com User , 16 years ago
Set on another but similar world to earth, this fantasy parellels American colonization with an interesting Fantasy twist. Interseting premise of how evil gets into a world. Enjoyable two book story.

Published by Thriftbooks.com User , 21 years ago
Angus is a good story teller, I have read several of his books. Exile was the first. Angus creates wonderful characters, colorful lands, and terrifying enemies. In Exile, he takes a slice of american colonial life, and drops it off in a fantasy world. there are nomadic tribes, and a rich "civilized" land. The book follows the course of these tow groups of people. This is where I had a problem with the book. Angus has always been a little long winded for my tastes. And he will devote several chapters to one set of characters, then jumps back to the others, who you have nearly forgotten. This is very annoying for me, as i prefer that the switch be made more often, after every two chapters or so. Just a personal preferance, but I warn you about it.

A truly epic story of good and evil...

Published by Thriftbooks.com User , 23 years ago
This is an unusual story that is told very well. If you love fantasy and are looking for a different twist in a seemingly static genre, this is a book for you.

a book that you should add to your collection!

Published by Thriftbooks.com User , 24 years ago
With this book Angus Wells shows us a struggle between good and evil.It shows us some great excitement and just enough love that it makes the story interesting without getting off the issues.A book that is fun to read,and I believe should be highly reccommened
Copyright © 2020 Thriftbooks.com Terms of Use | Privacy Policy | Do Not Sell My Personal Information | Accessibility Statement
ThriftBooks® and the ThriftBooks® logo are registered trademarks of Thrift Books Global, LLC