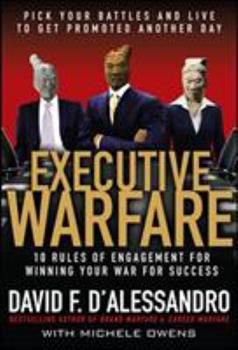 Executive Warfare: 10 Rules of Engagement for Winning Your War for Success

The New York Times Bestseller WIN THE WAR FOR SUCCESS It's not enough anymore to be smart, hard-working, and able to show results; At this level, everybody is smart, hard-working, and able to show results. Now it's a game for grown-ups. What really sets you apart is the relationships you build with people of influence. These people can include your peers, your employees, your organization's directors, reporters, vendors, and regulators-as well as...

If you want to rise to the top, read this book

Published by Thriftbooks.com User , 14 years ago
If you want to rise to the top of your organization, read this book. Many times. The ideas in this book (if properly executed) are worth $1 million to $100 million (or may be more). Also recommended: Career Warfare. I would be happy to pay good money for any work by D'Alessandro and Michele Owens. I hope the next book by the duo is about how to hunt (for business). In the book David D'Alessandro thanks his father and his father's namesake, which I thought was most interesting.

Informed, Practical, And About Half The Total Solution

Published by Thriftbooks.com User , 14 years ago
I would put this in my top five favorite books for management just behind Hubbard's How to Measure Anything: Finding the Value of "Intangibles" in Business and Taleb's The Black Swan: The Impact of the Highly Improbable. D'Alessandro has written a sort of The Art Of War for upper management. Everything I read in his book is something I can directly relate to my own experiences and probably would have been good advice at the time. Executive Warfare is a little touchy-feely after a read like Hubbard's How to Measure Anything: Finding the Value of "Intangibles" in Business, but Hubbard would probably even agree that, at some point, it's not all about measurements and advanced methods. No matter how competent and sophisticated a manager method's are, some issues are about raw survival. While it might seem there are many books on a similar topic, only D'Alessandro seems to capture all the key issues of avoiding corporate exile and the slow death of a manager.

How to win a "combat game for grown-ups"

Published by Thriftbooks.com User , 14 years ago
With Michele Owens, David D'Alessandro has written another book whose title and subtitle suggest direct correlations between the battlefield and the business world. What sets this book apart from almost all of the others is the fact that he includes no references to Sun Tzu's The Art of War nor to Carl von Clauswitz' On War. I also appreciate the fact that D'Alessandro establishes, develops, and then sustains a direct rapport with his reader. The informal, indeed conversational tone is precisely appropriate and brilliantly sustained. For example: "The single greatest reason why otherwise talented people get stuck in mid-career is because they believe that the same rules that applied for the first part of their careers still apply. They don't. You have to master a much subtler set of rules. You'll need to learn how to acquire the global perspective your peers lack, when and how to deliver bad news, when to take a shot at your rivals and when to be gracious, and, most important, how to handle the many new influences on your [career] trajectory...Intelligence, imagination, and cunning are all required here - but not underhandedness...I don't believe you need to be devious to succeed. In fact, I think being excessively political is a mistake." D'Alessandro focuses on the adjustments any executive must make as she or he assumes increased responsibilities during an incremental ascension to higher levels of management. His observations and suggestions indicate that he is an empiricist in that he is especially alert to context as well as to significant details, a pragmatist who prefers to focus on what does - and does not - work and has little, if any patience with "woulda/coulda/shoulda," and he has a unique ability to recognize what is most important among whatever options may be available. He seems determined to share what he has learned so that his reader will be able to balance impeccable integrity with "street smarts." His advice concerns do's and don'ts of when responding to challenges such as these: Managing increasing complexity at various stages throughout a "career trajectory" Excerpt: "It's not just that the pyramid narrows and the competition toughens as you rise. It's that the game changes fundamentally...[and, to repeat] In my experience, the single greatest reason why otherwise talented people get stuck in midcareer is because they believe that the same rules that applied for the first part of their career. They don't. You now have to master a much subtler set of rules." Dealing with rivals Excerpt: "It is far better to be a steady incremental player who wins, in the end, by impressing people all along the way than to be the kind of hothead who tries to force a quick culmination." Years ago, someone whose name I do not recall invoked a metaphor to make the same point: "Be a Bunsen burner, not a sparkler." Building a team Excerpt: "If you are not picking your own team, you are going to be handed some turkeys. When one of those tur

headed for the top

Published by Thriftbooks.com User , 14 years ago
I have enjoyed all of D'Alessdandro's books but this offering is surely the best. It's filled with insights into the people who can make or break us as we make we our way through the office jungle. D'Alessandro masterfully turns the office landscape into a chess board and gives you the other side's moves in advance. It's full of LOL tales of careers gone wrong before a single napkin is unfurled at the ubiquitous business lunch and valuable after the game analysis of every situation you've ever encountered and later found yourself left dazed wondering what happened. D'Alessandro's message isn't that the office is a battlefield to vanquish enemies and conqour the masses. Rather, it's a lesson in being human and undertsanding the complexities and social dynamics of the people you work with and for; as well as the ones you hope to replace. This book does'nt attepmt to glorify or breed a culture of machiavellian manipulation. Executive Warfare synthesizes and assimilates all of lifes truisms, every thing you've known all along but just didn't understand why it mattered or how to use it in your favor. Well worth the time especially in today's climate. Knowing the secrets to help you stand out from your peers, demonstrate leadership and add value could be your insurance policy against a pink slip.

The Absolute Authority for the Ambitious and Success Oriented

Published by Thriftbooks.com User , 14 years ago
Executive Warfare provides a valuable insight into what it takes to make it to the top, and ways to survive the onslaughts along the way. The way to the top is filled with pitfalls and dangerous routes, and this book teaches us to avoid or survive them to fight another day. It teaches us which battles are worth fighting and winning to ensure that we win the war. The key item here is to remember that the rules we know to get to where we are are no longer applicable when we are aiming for the corner office. The same skillsets, aptitudes, and mindsets must now be replaced and re-trained toward the new goal. It's focusing on making sure that we take the right steps, such as: 1. Making a win-win business deal with our bosses along the way. 2. Taking appropriate & calculated risks. 3. Winning enough support from our peers and subordinates. 4. Mastering our behaviors, thoughts, and emotions, since the stakes are now high and our competitors will do anything in their power to win. 5. Knowing our strengths and making sure that we find the right place at the right time to improve our chances to shine the brightest. As indicated in the introduction of this book, if you are already happy with your current position, then there are other readings available. On the other hand, if you're interested in getting to the next level, and eventually to be the one in charge, this book is a must have.
Trustpilot
Copyright © 2022 Thriftbooks.com Terms of Use | Privacy Policy | Do Not Sell or Share My Personal Information | Accessibility Statement
ThriftBooks® and the ThriftBooks® logo are registered trademarks of Thrift Books Global, LLC