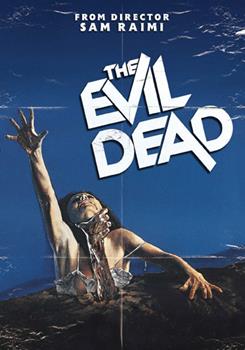 Teens in a mountain cabin play a professor's tape of mumbo jumbo from the Book of the Dead.

Published by Horror crazy , 4 months ago
I have loved this movie since I first saw it (and got scared out of my wits) when my family rented the VHS from a video store when I was a tiny tyke. If you’re as familiar with the movie as legions of fans are, you’re familiar with the plot: Teenage friends, including one boy’s sister, drive to a remote, decrepit cabin in the woods, find a creepy and grotesque “Book of the Dead”, play a recording of a man reciting passages from the occult book, and unintentionally cause all hell to break loose (quite literally), resulting in a chaotic, nightmare weekend that includes demonic possession and worse, which leads to one man, in particular, to endure “the ultimate experience in grueling horror!” Unlike most, I find very little humor in the story. I, instead, get the intense, gory terror that director Sam Raimi, producer and lead actor Bruce Campbell, composer Joseph LoDuca, and everyone else involved intended with they made the movie... and that’s why I love it. It’s not exactly what’s pictured here, but I own the Ultimate Edition, and it’s what I would recommend to all fans who are specifically looking to own the movie on DVD. I know that Blu-rays are probably the most popular way to buy movies for your home entertainment library, but the Ultimate Edition definitely has bonus features that Evil Dead fans will relish. It contains three discs. Two of them feature two different versions of the 80s classic and, with each of these two DVDs, you get audio commentaries, one with director and co-writer Sam Raimi and producer Rob Tapert, and one with Bruce Campbell. The first disc also features an extensive “making of” documentary called One by One We Will Take You: The Untold Saga of The Evil Dead. Disc 2 also features The Evil Dead: Treasures from the Cutting Room Floor. I have not watched it, but I assume that it’s a look at deleted scenes. And the third disc features a documentary called The Ladies of The Evil Dead. There is also a brief look at the film’s original distribution called Discovering The Evil Dead. Plus, you get TV spots, the theatrical trailer, makeup tests, a poster and memorabilia gallery, a still gallery, and trailers for other horror movies that have been released on DVD by Lionsgate, including other 80s horror classics, such as Hellraiser and Reanimator. You also get a reversible movie poster. Evil Dead probably couldn’t ask for anything better, especially for the Halloween season! Trick 🎃r treat!
Trustpilot
Copyright © 2022 Thriftbooks.com Terms of Use | Privacy Policy | Do Not Sell My Personal Information | Cookie Preferences | Accessibility Statement
ThriftBooks® and the ThriftBooks® logo are registered trademarks of Thrift Books Global, LLC