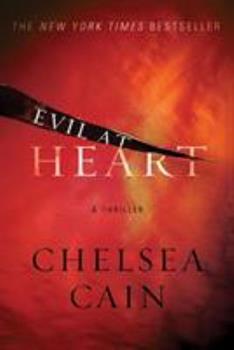 Evil at Heart: A Thriller

Chelsea Cain's novels featuring Portland detective Archie Sheridan and serial killer Gretchen Lowell have captivated fans through two New York Times bestselling entries, Heartsick and Sweetheart . And Gretchen Lowell is still on the loose. These days, she's more of a cause c l bre than a feared killer, thanks to sensationalist news coverage that has made her a star. Her face graces magazine covers and there have been sightings of her around the world...

Published by Thriftbooks.com User , 12 years ago
Evil at Heart, the third in the Archie and Gretchen series, picks up two months after last year's installment, Heartsick. Archie Sheridan has taken a leave of absence from the task force and voluntarily checked himself into a psych ward to help with his vicodin addiction and suicidal tendencies. He is lingering in the mental hospital when a series of bodies are found that point to Gretchen Lowell as the murder, violating her and Archie's agreement that she would stop killing in return for him not to commit suicide. Gretchen has reached cult status, with fan groups, crime scene tours, t-shirts, and memorabilia. Some even celebrate the number of days she has been free. Susan Ward, journalist for the Herald, wants to write a book about society's fascination with a serial killer. When an anonymous tip leads her to one of the bodies, she is drawn back into the hunt for Gretchen along with Henry, Archie's partner. Chelsea Cain's novels are quick page turners. The latest is filled with same intensity and suspense. At times, the gory details made me flinch. The character's relationships are intriguing and I can't wait til the next to find out how they evolve. Susan's death facts were morbidly funny. Archie's problems make my heart ache in sympathy. I was glad to see that he is making improvements. I would recommend this books series. It reminds of Hannibal Lector-you know the person is a killer, but you can't help but like them a little.

Published by Thriftbooks.com User , 12 years ago
Gretchen Lowell, America's most gorgeous, insane and sexy serial killer has escaped. The camera loves Gretchen and so, it seems, does America. Her picture graces magazine covers, t-shirts with "Run Gretchen" appear on our teenagers, coffee mugs with "I'd Kill for a Cup of Coffee" and her visage appear in break rooms throughout offices, women read articles on how to "get Gretchen's hairstyle" in fashion magazines. Gretchen Lowell fan clubs are springing up across the country. Archie Sheridan had hunted her for years, and found right beside him, involved in the case. The horrific injuries she inflicted upon him are nothing compared to the psychological damage she left in her wake. Archie has suffered and bled and survived, and now, after he has been hospitalized for months and just starting to heal, he's being drawn back into the hunt. People are once again dying in gruesome ways, and it seems that Gretchen has returned and began killing once more. Archie is forced to begin his hunt again to discover if the Beauty Killer has returned or if this is the work of a bizarre cult of her followers. Chelsea Cain's new book, Evil at Heart is a high speed adrenaline pumping, pulse pounding, dry-mouthed thriller. Do you remember the times you've gone to a really good scary movie, and someone, usually a girl, goes into a dark scary building? And you're saying...."don't go in...don't go in.." because you just know that no good can come of it if she does? That's what this book does. At one point, while I'm reading as fast as I can, my right brain is screaming, "No, don't go in there, run...run.... you stupid girl, don't you watch scary movies...get out get out get out...." At the same time, my left-brain is saying, "Uh...imaginary character in a novel...get a grip..." After my right-brain got done slapping the crap out of my left-brain, I continued reading and freaking out. A few more minutes of reading with my fingers splayed in front of my eyes, and I made it to the end of this particular chapter...whew...now I could go to bed. It was late, and then, yup, I'm sucked back in. It was the old "just a few more pages" bit. My recommendation: don't start this book when you have enough time to read it in one sitting. You don't want to dream about it, that would be scary and bad, and you sure as heck don't want to wait and see what happens next. Cain understands that too much of the unrelenting fear factor might not be manageable to us weaker hearted readers. She lets us see moments of humor in the thoughts of her protagonists that can elicit a chuckle from us, even though we know we probably shouldn't giggle. Chelsea Cain is the Queen of Creepy as far as I'm concerned. Her first two novels, Heartsick and Sweetheart were good, and I liked them enough that I was interested in reading her third. If you're a person who hates coming in partway through a series, (like me) you might want to check them out, but I don't think you'd have to read them first to "get" Evil at

A Very Good Series About A Serial Killer

Published by Thriftbooks.com User , 12 years ago
This is a great series about a female serial killer, much like Dexter etc. The serial killer in this book is a former psychiatric nurse who manipulates people especially men and tries to make survivors into serial killers too. She takes great pleasure in tormenting a detective named Archie Sheridan who worked on her case before she was caught. In this book, a series of murders seem to be happening by a copycat killer. Is Gretchen who has escaped from prison doing them or someone else? Can Archie find out? Who else is involved? The story in Evil at Heart is pretty exciting and a fast read. I have a feeling that the newest HBO or Showtime series may come from this book, or maybe a movie?! The book Sweetheart, the second book in the series was used as a prop in True Blood a few weeks ago. The maenad, Maryann is reading it while manipulating Tara into thinking she is a wonderful woman. Very nice gag! Good series and a terrific installment. I look forward to the next book.

This one is not for the squeamish!

Published by Thriftbooks.com User , 12 years ago
I received Evil At Heart as an advanced reader's review copy. It's the sequel to Heartsick but can be read and understood without reading the prior novels. (Although I would highly recommend starting at the beginning, simply because Chelsea Cain is a brilliant writer.) This book grabbed me from the very beginning. I didn't skim over one single word. It's one of those books that will keep you up late at night reading, then keep you up later because it's so disturbing! Evil At Heart is fast-paced and can leave you breathless. The plot follows a female serial killer whose depraved actions have earned her her very own cult following. If you like suspense and aren't horrified by gory details, then Evil At Heart is a must read.

"We made her into a celebrity."

Published by Thriftbooks.com User , 12 years ago
In Chelsea Cain's "Evil at Heart," forty-year old homicide detective Archie Sheridan has taken up residence in the Providence Medical Center psychiatric ward in Portland, Oregon. After being victimized by serial killer Gretchen Lowell and becoming addicted to pain pills, Archie signed himself in voluntarily. Because of Gretchen's hold over him, Archie wrecked his marriage and is on leave from his job. His goal is to rid himself of his twin obsessions: Vicodin and Gretchen. In spite of Lowell's cruelty, Archie admits that he craved the company of this gorgeous but deadly predator. He has progressed enough to concede that he has serious issues to work through before he can be considered "cured." Unfortunately, Gretchen is still at large and the mayhem has not yet ended. Human bodies and body parts begin to show up all over town; either Gretchen is back at work or a copycat is emulating her. This is Cain's best work to date. Instead of playing it straight and simply grossing us out with descriptions of nauseating gore, the author injects elements of dark humor that enliven the proceedings enormously. It seems that Lowell, known popularly as the "Beauty Killer," has become something of a folk heroine. Although she has slaughtered and mutilated many men and women, her image is everywhere: She has a Wikipedia page, there are fan sites devoted to her on the Web, and people are wearing T-shirts with her face on them. Gretchen memorabilia is being sold on eBay, and there is even a "Beauty Killer Body Tour. Thirty-five bucks. Twenty crime-scene stops." How did this madwoman become an icon? Cain implies that we live in a warped society whose values have become seriously perverted. At one point, Archie says to some young Lowell groupies, "Gretchen Lowell is a psychopath. She is not some sort of antihero." He wants them to give up their adulation of this monster, but his plea falls on deaf ears. "Evil at Heart" is a suspenseful and entertaining thriller in which Archie is forced to once again to confront his demons with the help of journalist Susan Ward and Detective Henry Sobol, Archie's close friend and colleague. They are seeking either Gretchen herself or acolytes attempting to mimic her activities. Cain's prose is witty and crisp, her dialogue is clever and often hilarious, the tidy plot is fast-paced, and the conclusion is as satisfying as can be expected, considering the unpleasant subject matter. Susan has a major role in this novel and she is a riot. With her purple hair, tendency to wisecrack, and rebellious personality, she is the poster girl for nonconformity. Even as she mocks herself for being stupid, Susan puts herself in harm's way to get material for her forthcoming book. Cain's themes are that a person can be both physically beautiful and mentally unbalanced, many individuals take a perverse pleasure in violence, and those whom we place on a pedestal are often morally bankrupt. "Evil at Heart" is highly recommend
Copyright © 2020 Thriftbooks.com Terms of Use | Privacy Policy | Do Not Sell My Personal Information | Accessibility Statement
ThriftBooks® and the ThriftBooks® logo are registered trademarks of Thrift Books Global, LLC