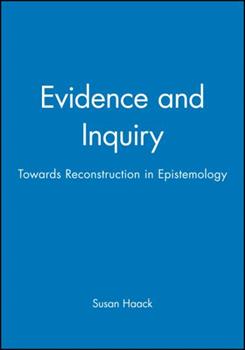 In this important new work, Haack develops an original theory of empirical evidence or justification, and argues its appropriateness to the goals of inquiry. In so doing, Haack provides detailed critical case studies of Lewis's foundationalism; Davidson's and Bonjour's coherentism; Popper's 'epistemology without a knowing subject'; Quine's naturalism; Goldman's reliabilism; and Rorty's, Stich's, and the Churchlands' recent obituaries of epistemology...

Published by Thriftbooks.com User , 22 years ago
Haack finds a happy mean between the old foundationalist epistemology, as exemplified by C.I. Lewis, and more recent coherentist epistemologies coming down from Hegel and others. This book is a modest, yet important, step in the development of the theory of knowledge. Essentially, she argues for muti-directional non-deductive support relations should be considered as normative facets in the justification of (evidence for) theories. Of course, there is also a lot more said in the book than this. Haack also addresses the Quinean idea of a naturalization of epistemology. She does this with a clear head, that is free of a pre-concieved metaphysical agenda. She decides middle ground between a science independent epistemology and a extreme sort of "scientism" is the safest place to stand. I found her arguements persuasive here, and I decided maybe epistemology is a worthwhile area of philosophy, when practised as a semi-independent investigation, set off from biological psychology, and the sciences of cognition and learning behavior.

The pinnacle of 20th C. epistemology

Published by Thriftbooks.com User , 22 years ago
Haack solves the conundrum of coherentism vs. foundationalism. This is rare: philosophy that proves something interesting to be true. No other 20th C. epistemology will be widely read 100 years from now. This one will required reading even then.
Trustpilot
Copyright © 2022 Thriftbooks.com Terms of Use | Privacy Policy | Do Not Sell or Share My Personal Information | Accessibility Statement
ThriftBooks® and the ThriftBooks® logo are registered trademarks of Thrift Books Global, LLC