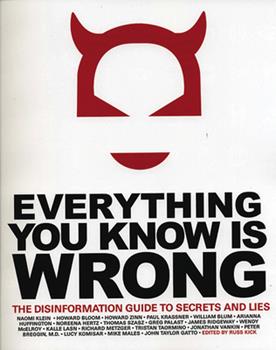 Everything You Know is Wrong: The Disinformation Guide to Secrets and Lies

This book begins where You Are Being Lied To left off. Once again, an amazing group of investigative journalists, researchers, insiders, dissidents, and academics peels back consensus reality and shows us what's really happening. Hard, documented evidence on the most powerful institutions and controversial topics in the world. Among the revelations: Antidepressants trash your brain. China has repeatedly threatened to nuke the US. Young people are...

Published by Thriftbooks.com User , 18 years ago
Everything You Know Is Wrong is a blockbuster of a book which points up the glossing over, disinforming and secretizing of so much that is vital to the good life in America we all yearn for! As a woman of 83, I still remember times when this kind of power-over process was cruder and even more devastating to the body politic and to our dedication to the principles of genuine democracy. Because the paradox is that BOTH the all-inclusiveness of disinformation AND our ability to see beyond it to its origin in special interests - as well as the general idiocy of the people who believe in our gullibility - have grown exponentially! I'm hoping to live long enough to see how the war on real democracy - and our own ability to win it! - comes out!In the meanwhile, the article by my own favorite caped crusader, John Taylor Gatto, has the most amazingly compelling explanation of why and how we got to be this way - in terms of our public school system - that you'll ever run across! Get the book. And invite your kids' teachers to read it.

Everything You Read Is Wrong

Published by Thriftbooks.com User , 18 years ago
This book from the folks at Disinformation is generally stronger than its predecessor, "You Are Being Lied To." That book was a similar collection of nonconformist articles but attempted to tie them all together under the theme of media manipulation and corporate conspiracies to control public information. That theme didn't work out too well as the book was damaged by whiny conspiracy theorists and bleeding heart crybabies. "Everything You Know Is Wrong" manages to avoid that problem, which could potentially damage any book with this kind of philosophy, and that's because it doesn't try to make any type of overarching point this time. Therefore this book becomes a more enjoyable and believable collection of articles on subjects that you are unlikely to hear about in the mainstream media.Another strength of this book is its differing viewpoints, as many political persuasions are represented and some of the essays even contradict each other. In a book like this that reacts against mainstream power, you will naturally get a lot of leftism, and that's true in at least four-fifths of this book. However, the right will find representation here too, especially in the essay "Watchdog Nation" which criticizes anti-racism groups that are mostly acting only in their own self-interest, plus endorsements of books that criticize gun control concepts and the Clinton/Gore administration. Readers of this book who take every single essay at face value, regardless of the reader or writer's political leanings, will find themselves with new well-rounded viewpoints.Regardless, the best essays here are far beyond mere left vs. right politics. Most notably "The Whole Truth About Domestic Violence," which proves that more men are abused than women; "Some Lessons from the Underground History of American Education," a truly terrifying expose on the real ideology of public schools (e.g. conformity and indoctrination rather than critical thinking); and "Postcards from the Planet of the Freaks," a realistic view on disabilities from the disabled themselves, which you are highly unlikely to see elsewhere. There are a few clunkers though, especially "Fear of a Vegan Planet," which starts out well with many well-considered reasons to avoid meat, but in the end states that meat eating is inherently illogical, as is "renting oneself out eight hours a day." If this author thinks that making a living is illogical, does it matter if you're a vegan when you can't afford to eat? Fortunately, inanities like this aren't numerous enough to damage the overall success of this book.

A very different view of America

Published by Thriftbooks.com User , 19 years ago
This is a group of articles, some previously published, that give a very different interpretation of many contemporary issues. This isn't a "liberal" or "conservative" book, since the authors come from all over the political spectrum.The Vatican Bank, with the Pope as sole shareholder, has been involved in financial scams, tax evasion and money laundering of Nazi gold. Some groups have an interest (usually financial) in taking the tiny number of Americans who belong to hate groups and making them into a tidal wave about to engulf the whole country. Conventional wisdom says that Henry Lee Lucas was one of the biggest serial killers in American history. On more than one occasion, he confessed to any murder put in front of him, even if he wasn't in the same state at the time (the police usually didn't care about that part), to increase his chances of going to the electric chair. Many witnesses say that there was a third, older, shooter that day at Columbine High School.Mad cow disease is spreading virtually unchecked in America. There is a very graphic look at what a meat-based diet is all about, for animals and for humans. Another piece is titled, "Psychiatric Drugging of Children for Behavioral Control." It is a mistake to assume that all disabled people want to be "cured." Despite their high-sounding words in public, in private, all major religions subjugate women and treat them as inferior to men. Press coverage of the Branch Davidian siege at Waco, Texas, consisted of little more than FBI press conferences, and bore little relation to the truth. In many large cities and smaller towns, seeing the money to be made from crime, police have become the crooks. A piece by the editor detailing the large number of warnings received by the US government before the September 11 attacks, is, by itself, worth the price of the book.I loved this book. Like its prequel "You Are Being Lied To", this book is full of information that will never be covered in the American news media. There is something here to upset or offend everyone. This book is extremely highly recommended.

Even Better Than The Last One!

Published by Thriftbooks.com User , 19 years ago
I bought (and reviewed) the first Disinformation Guide, You Are Being Lied To, and gave it a rave review. I didn't really think that book could be beaten, but I was wrong. Everything You Know Is Wrong is so compelling that I sat down and read it non-stop for a whole (3 day) weekend. That's many, many hours of reading.Return names are Howard Bloom, Howard Zinn, Richard Metzger and several others. There's more variety this time though, with contributions from Naomi Klein, Arianna Huffington, Noreena ("Silent Takeover") Hertz, John Taylor Gatto and several other notable authors.Standouts for me were Russ Kick's "more than two shooters" expose on Coulmbine, Peter Breggin MD's outing of the real effects of antidepressants, David Lochbaum's unveiling of US nuclear accident secrets and John ("NY Teacher of the Year")Taylor Gatto's riveting spin on the purpose of the education system (it's not about educating!).It's worth mentioning too that the book is a beautiful thing in itself, coffee table worthy, huge, and a tremendous value when you see how much is in it. Buy it - you won't regret it!
Copyright © 2020 Thriftbooks.com Terms of Use | Privacy Policy | Do Not Sell My Personal Information | Accessibility Statement
ThriftBooks® and the ThriftBooks® logo are registered trademarks of Thrift Books Global, LLC