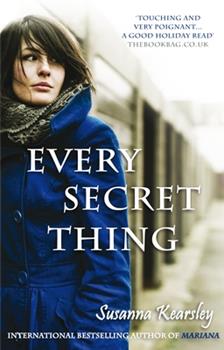 Kate Murray is deeply troubled. In front of her lies a dead man, a stranger who only minutes before had spoken to her - about a mystery, a long-forgotten murder and, most worryingly, her grandmother. His story was old, he had told her, but still deserving of justice. Soon Kate is caught up in a dangerous whirlwind of events that takes her back into her grandmother's mysterious war-time past and across the Atlantic as she tries to retrace the dead...

A book you will remember

Published by Dobbs , 2 years ago
I am still in awe of this story; my mother cried. Now we will pass it to my sister. An extraordinary story during a time only a few today understand. My mother is one of them. I remain enchanted as I walked through this story to the end.

Published by Thriftbooks.com User , 12 years ago
Every Secret Thing is an excellent mystery novel by one of my favorite authors, Susanna Kearsley. This story held my attention from beginning to end. I highly recommend it to mystery lovers.

For fans of Mary Stewart

Published by Thriftbooks.com User , 12 years ago
I am so incredibly happy that I have found a current author who I am unabashedly in love with their writing style. I have to confess that most of my favorite authors are either long dead, or too old to write any more books. DuMaurier, Stewart, M.M. Kaye all fit this description, and sadly (to my point of view), Elizabeth Peters/Barbara Michaels is too busy writing about Amelia Peabody and her minute-by-minute adventures to hold much alure for me with her current literary offerings. I love these writers, but let's face it, there will never be another new release from the first three, and I'm resigned to never reading another spookie/suspense by Michaels again.... ...which brings me to Susanna Kearsley (here named Emma Cole) in her book, Every Secret Thing. If I didn't know any better, I'd think she was Dame Stewart's grand-daughter, and quite possibly DuMaurier's great-niece (with a bit of Kaye's second-cousin twice removed thrown in for good measure). Kearsley has quite deftly managed to incorporate the flair of Stewart's writing genius and infuse it with her own brand of poignant characterizations and turn of phrase. Every Secret Thing is Kearsley's/Cole's peon to all the best that Stewart offered in her romantic suspense novels, and she pulls it off fantastically. I found myself devouring page after page of this book featuring 2 intersecting storylines involving World War II espionage, the search for justice in an unknown and unsolved murder 60 years previously, and the acknowledgement by a young woman of the worth, the courage, and the sacrifices of people grown elderly, and therefore "invisible". Kate Murray is a successful Canadian journalist covering a murder trial in London when an old man strikes up a coversation with her and cryptically informs her of another murder in which justice was denied. Before leaving Kate, who really wasn't paying much attention to the old man's ramblings, he asks after her grandmother, and then leaves her and is immediately run down and killed by a hit-and-run driver. Kate's subsequent search for the story behind this man, Andrew Deacon, lead her on a suspensful search for answers that covers several countries, and on a personal discovery of her beloved grandmother's past life. Kearsley/Cole excelled in bringing so much of the descriptive narrative that Mary Stewart was reknown for in her novels. What Kearsely/Cole does even better then Stewart, IMO, is to bring a level of bittersweet poignancy to what could have been just a well written suspense novel. I found myself actually weeping at the end of Every Secret Thing, which isn't the norm with me. But Kearsley/Cole rendered the character of Andrew Deacon so lovingly and so deftly that it was hard not to feel that his sacrifice and his loss was as lovely a thing as the most romantic fiction I've read. I can only equate my feelings for Andrew to that which I felt for Rick, in the classic 1940's movie, Casablanca. Here's looking at you, kid, indeed. This b

Published by Thriftbooks.com User , 13 years ago
This mystery is different from Kearsley's other novels. It doesn't have a supernatural element. It's a quick-paced story that is well-developed. The plot takes place in modern day with flashbacks to WWII. The mystery will keep you interested and guessing. Reading the book has made me rethink how I treat the elderly and people who don't perform as quickly as I think they should. I see wrinkled faces as former beauty queens, fabulous parents, war heroes, and unsung heroes.

Published by Thriftbooks.com User , 14 years ago
From the moment I opened this book I was transported to a different place and different time. Every page is filled with evocative descriptions and every character beautifully developed. I learned from this book and was entertained as well. What a perfect combination! I look forward to this author's next book under Emma Cole or Susanna Kearsly!

Published by Thriftbooks.com User , 15 years ago
If you enjoy Susanna Kearsley's books then you will not want to miss her newest. Although written by Kearsley "Every Secret Thing" has been published under the name Emma Cole as, unlike her other novels, there is no supernatural presence. Other than that, this book is in the same style as her other novels, a "historical" mystey, this one relating to WWII, combined with a modern thriller that takes you from England to North America and then to Portugal. Readers of Kearsley's other novels will enjoy the cameo appearance of a character from one of her earlier books and, as always, her prose is beautifully written - a joy to read and re-read.
Trustpilot
Copyright © 2022 Thriftbooks.com Terms of Use | Privacy Policy | Do Not Sell My Personal Information | Accessibility Statement
ThriftBooks® and the ThriftBooks® logo are registered trademarks of Thrift Books Global, LLC