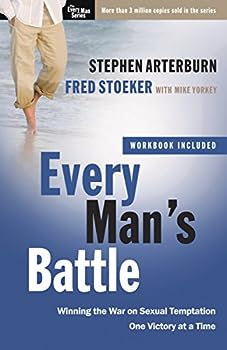 Every Man's Battle: Winning the War on Sexual Temptation One Victory at a Time (The Every Man Series)

(Part of the The Every Man Series)

A down-to-earth, step-by-step plan to help men overcome sexual temptation deals with pornography, adultery, and other issues leading men astray. Original. This description may be from another edition of this product.

Published by Ruth , 3 years ago
Very helpful for men. It’s a must read book, if your men are struggling in this are of his life.

the hunger for more

Published by Thriftbooks.com User , 15 years ago
I review this book with mixed motives. On the one hand, sexual addiction is so devastating to men and those who love them that almost any assault mounted on its impregnable fortress is worthy of applause. After all, the public leaders with whom I work and whose downfall resounds so loudly are grateful for almost any weapon they can add to their armament. On the other hand, this battle matters so much that one wants to wage it with appropriate cunning, keeping the eye focused on winning the war rather than lusting for the celebration that comes after every small battle. Approaches to overcoming sexual addiction can be roughly divided into two, oddly analogous to debates over economic policy or even the traffic of illegal drugs. On the one hand are the demand-side arguments. That is, in order to dry up sexual addiction, the pressing need is to find out what drives the hunger that leads men into sexual addiction. What is *missing* in lives that motivates guys to try to replace it with pornography and illicit sexual encounters? Those who take this tack typically look for long-term solutions to the *demand*. Often this approach will rely in part on counseling or therapies that help a man (and the woman he has promised to love) define the need and then seek healthy ways to fill it. On the other hand lie what I'll call the supply-side arguments. According to this approach, a man needs to interdict the supply of titillating messages, arousing inputs, and the habits to which they lead by discipline, self-protection, accountability to others, and the like. Supply-siders employ the language of self-discipline, will-power, and accountability. We're in a war, the narrative runs. Big, important things are at stake. Like any soldier in a war, you seek to evade or kill the enemy, relying on the band of brothers that got you this far alive. Arterburn's and Stoeker's EVERYMAN'S BATTLE is a battle manual for supply siders seeking to kill off an enemy that has devastated the land. Though the authors don't say so, one comes to the conclusion that they recognize a demand-side issue, but consider it to be every man's struggle, fairly conventional in its contours, and perhaps not worth fretting over in time of war. So they go on the attack. I commend them for their earnestness and I believe many men will find tactical benefit in some of their prescriptions. I wonder, however, whether the war will ever be won in just this way. The book's nineteen chapter are divided into six parts: 'Where Are We?', 'How We Got Here', 'Choosing Victory', 'Victory with Your Eyes'. 'Victory with Your Mind', and 'Victory with Your Heart'. If you have a low tolerance for cringe-worthy self-revelation, you might not want to begin your reading with this book. Both authors are familiar with what it's like to live on the brink of self-immolating sexual slavery and are not shy about baring their hearts nor even those of their wives, who weigh in by design and with regularity. In Part One (

Published by Thriftbooks.com User , 16 years ago
I recieved this book in a very timely manner. I was able to send it to my husband in Iraq and he says it is a great book. Thanks.

Published by Thriftbooks.com User , 21 years ago
This amazing book has a step by step battle plan like nothing you've ever read before. I've read many other books on this subject, but most of them deal with the reasons "why" sexual temptation is such a struggle. That is helpful to a certain extent, but this book is different. It is an ACTION book! It doesn't just talk about the "why," it gives you the "HOW!" Imagine not being overwhelmed by a barrage of mental images. Imagine becoming the person on the inside that you've been trying to portray on the outside. Imagine having no regrets and a new relationship between you and God. Imagine actually WINNING the battle. Only three weeks have passed since I read this book and my life is forever changed. I'm ordering 6 more copies for people I love, because this really is EVERY man's battle!
Trustpilot
Copyright © 2022 Thriftbooks.com Terms of Use | Privacy Policy | Do Not Sell My Personal Information | Accessibility Statement
ThriftBooks® and the ThriftBooks® logo are registered trademarks of Thrift Books Global, LLC