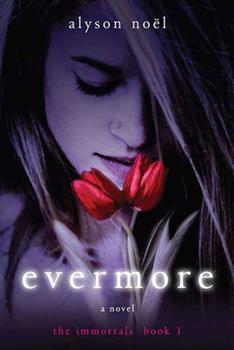 (Book #1 in the The Immortals Series)

Don't miss Evermore, the first book in Alyson No l's #1 New York Times bestselling The Immortals series. Enter an enchanting new world where true love never dies. . . After a horrible accident claimed the lives of her family, sixteen-year-old Ever Bloom can see people's auras, hear their thoughts, and know someone's entire life story by touching them. Going out of her way to avoid human contact and suppress her abilities, she has been branded a freak...

Published by Stephanie , 1 year ago
Exciting, different and charming . I loved the characters and can’t wait to read the next one!

Book Quality (Both Physical and the Content) is Great!

Published by Brittany2713 , 6 years ago
I love this book, and the book is on great physical condition! I am very impressed!

Published by Thriftbooks.com User , 6 years ago
This book is amazing, the characters get you hooked, and there are constant surprises, it's not one of those easy and predictable books, it is it's own thing! It was writen in exquisite detail and keep reading the series, it only gets better! I've read many books about Vampires (Twilight), Werewolves (once again Twilight), and even trolls, or as they call themselves trylle (I highly recomondy the Trylle Trilogy by Amanda Hocking along with the Twilight books) but never once have I read a book about immortals, and I LOVED it!! It also talked about chakras in the later books, which I have a deep intrest in, and so many other intresting facts, I truly do highly recomend this book!!!!

Alyson Noël has hooked me! I love Ever and the Immortal Series

Published by Thriftbooks.com User , 13 years ago
I found out about Alyson Noël through the amazing website/blog called Free Book Friday that is founded by author Jessica Brody. I'm so glad that I read and even heard the wonderful podcast interview of Jessica and Alyson talking about her first adult novel, Fly me to the Moon and two of her recent released young adult novels Saving Zoë and Cruel Summer. I also recommend that you all listen to it also so you can decide for yourselves if you agree with me about Alyson Noël's experience in writing and adult novel after only writing young adult novels. She recently released a new young adult novel called Evermore, which is the first book in her Immortals series and has hit the New York Times Bestseller list and even had gone into second printing because the first printing sold out. Well I was lucky enough to get to interview Alyson Noël right here on my blog and you should watch out because soon I will be reviewing some of her novels both adult novel and young adult novels as well. Today I'm going to review her New York Times Bestselling novel Evermore, which is the first book in her new Immortals series. When I first heard of Evermore and read the blurb that Alyson has on her website I immediately thought of Stephenie Meyer's novel Twilight because it sounds so similar. My opinion didn't change that much when I was reading the novel but as I got to read and know more about the characters I could see that they may have similar points. That is where things end because they are totally different series and I know I may get some boos and hisses but I have to say that I totally LOVE, LOVE Alyson Noël's Evermore so much more than Twilight. The novel starts at a point after a horrible accident claims the lives of the main character's family. Sixteen-year-old Ever Bloom can now see people's auras, hear their thoughts, and know someone's entire life story by touching them after she wakes up in the hospital with multiple injuries that would take time to heal. That is a lot to handle for Ever after losing her entire family but she has to cope with it since she has the rest of her life ahead of her. Going out of her way to avoid human contact and suppressing her abilities, she has been branded a freak at her new high school--but everything changes when she meets Damen Auguste. Ever has moved to California to live with her only remaining living relative, which is her father's twin sister, a lawyer who has never been married or had any children to raise before. Now Damen is gorgeous, exotic, and wealthy and he's the only one who can silence the noise and random energy in her head--wielding a magic so intense, it's as though he can peer straight into her soul. He is a captivating young man who has brought many new feelings to surface in Ever that are really getting to her since she hasn't been living until Damen came into her life. As Ever is drawn deeper into his enticing world of secrets and mystery, she's left with more questions than answers. And she has no

Published by Thriftbooks.com User , 13 years ago
Yes, this book is like Twilight in some ways, but I think that's what I really liked about it. I have been looking for books to help me get over the Twilight series, and this one definitely fits the bill. I've tried reading several vampire books since, but none of them even compares, so I feel like I found exactly what I was looking for in this book. There is a supernatural element, and then there's of course a love story that is very Edward-and-Bella-like. So, if you're looking for a good paranormal romance, then this is the book you want!

Published by Thriftbooks.com User , 13 years ago
Since the accident that killed her family, Ever can see auras, hear people's thoughts, and know a person's life story just by touch. She also has regular conversations with her dead sister. She didn't ask for these new talents and her efforts to hide her gifts have left her a freak at her high school. But when Damen Auguste enters the picture, everything changes. Damen is movie-star gorgeous, mysterious, and the one person who can block all the psychic energy Ever keeps trying to avoid. Damen and Ever are drawn to each other, but Ever can't shake the feeling that there is something that he's hiding. He's the only person that Ever can't read anything about. Damen has no aura, Ever can't hear his thoughts, and she has know idea who - or what - he really is. Every once in awhile, a book comes along that I end up getting sucked into and become addicted. EVERMORE was one of those books. When I wasn't reading, I was thinking about how I could sneak away to read some more. I couldn't put it down. I dreamt about this book. When I finished, I couldn't get it out of my head. This book was simply breathtaking. Ever is a wonderfully realistic character that grows throughout the novel. The guilt she feels over her family's accident and her grieving process are heart-wrenchingly real, as is her growing acceptance of her new psychic gifts. I also loved the scenes with Riley, Ever's little sister. Who knew a ghost could be so funny and charming? I know she's just waiting to have her own series written about her. And Damen...well, what can I say - I'm in love. If you're looking for a new lit-boy crush, Damen is it. Alyson Noel knows how to write for and about teens, and this is one of her best books yet. I can't wait to find out more about the mysterious Damen and step into Ever's world again. Combining mystery and romance, EVERMORE is the beginning of the next must-read paranormal series. Be sure to get your hands on this one - you'll be swept away. Reviewed by: Sarah Bean the Green Bean Teen Queen

A must buy! about trust, forgiveness, hope. And everlasting love.

Published by Thriftbooks.com User , 13 years ago
Wow, wow, wow! Paranormal tales are usuall not my cup of tea, but Evermore has converted me! To summarize, this book is about 16 year old Ever, who had a near death experience when her entire family is killed in a car crash. Since then, she sees auras, hears people's thoughts, and can know their life story by just a touch. She is totally oversensitized by the voices and noise, and hides under hoodies and iPod headphones to try and escape. Basically she becomes a freak at her new school. But everything changes when Damen, the hot, handsome, rich, multi-talented, mysterious newcomer arrives at school. Besides all these amazing attributes, she's further captivated because she can't hear his thoughts or see his aura (reminding her of when she was just a normal girl and her family was alive) and his presence/voice seems to calm/silence all the chaos in her head. THIS IS NOT A GOREY VAMPIRE TALE -- no REAL vampires were apparent in this book -- it was more about trust, hope, forgiveness. And everlasting love. I totally enjoyed this. I was entertained by the witty dialogue, the humorous actions and reactions to mind-reading, and of course, the very honest, pure character development. Says it's for Young Adults -- and I'd add, for the young at heart. If you are a Stephanie Meyers fan, this new series by Alyson Noel is a must buy! BTW, this story does wrap up well enough that you aren't moaning that the author left you hanging off a cliff. But, I for one have all ready pre-ordered the second in the series, Blue Moon, coming out in August 2009. It's that good!
Trustpilot
Copyright © 2022 Thriftbooks.com Terms of Use | Privacy Policy | Do Not Sell or Share My Personal Information | Accessibility Statement
ThriftBooks® and the ThriftBooks® logo are registered trademarks of Thrift Books Global, LLC