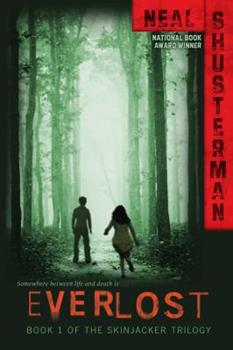 (Book #1 in the Skinjacker Series)

Nick and Allie don't survive the car accident, but their souls don't exactly get where they're supposed to go either. Instead, they're caught halfway between life and death, in a sort of limbo known as Everlost: a shadow of the living world, filled with all the things and places that no longer exist. It's a magical, yet dangerous place where bands of lost kids run wild and anyone who stands in the same place too long sinks to the center of the Earth...

Published by Chase gray , 5 months ago
I loved the book his writing is so good I always love this books. I highly recommend his books especially unwind I bought the acceptible condition and there were a few imperial but that was expected 9/10 highly recommend

Published by stormingbanana , 1 year ago
Other than the completely dark yellow pages (I guess it's because it's "aged") it's in great condition.

Published by Jensen , 2 years ago
When I was beginning to read books and truly enjoy reading them this was one of the first ones I fell inlove with. It explains afterlife in a simple story where only kids who die stay on in a kind of middle place one earth. I don’t actually believe any of that cuz it would suck to be stuck on earth as a ghost and all but I LOVE how this story is told!!!! Definitely read it!

Published by Thriftbooks.com User , 14 years ago
The amazing world of everlost is filled with afterlights,greensouls, and one monster named McGill. McGill travels in a ship looking for trapped greensouls. The book starts out with Allie and Nick getting in a car accident and landing in Everlost. They soon meet Lief and they travel to New York. They meet Mary Hightower and Nick grows very fondly of Mary. But Aliie still doesn't trust her and soon leaves. O.k I won't tell you the whole story but I highly recommend this book!!!5 STARS!!!!

Published by Thriftbooks.com User , 14 years ago
Will Allie, Nick, and Leif ever get out of Everlost? Everlost tells the story of the three children; Allie, Nick, and Leif adventuring through Everlost. Nick and Allie died of a head on collision on the way to a wedding. They did not even know each other. They woke up in a forest and saw this kid. They asked him what his name was and he did not remember his name because he had been by his self for so many years. So Nick and Allie named him Leif because he lived in a lush green forest. Leif explains that people in the living world have no effect on us Afterlights, and we are ghosts. Nick Allie and Leif adventure through Everlost to find out more about this second world. They go through Manhattan, New York and see the Twin Towers that had crossed into Everlost when they were attacked. They meet Mary a leader of a group of Afterlights. They get caught by the McGill, a monster that captures children to try to get his life in the living world back. They escape from the McGill and defeat him with Mary and the kids that she keeps track of. The McGill was defeated and there were no more threats in Everlost. Although Nick, Leif, and Allie could never get out of Everlost, They were happy.

Published by Thriftbooks.com User , 15 years ago
This book left me intrigued about the afterlife, and caring greatly about the fate of the characters--well, one in particular. Talk about a heroic journey! I truly hope Shusterman feels like visiting this world again and continues Nick's saga. Fascinating read.

Not just for young adults

Published by Thriftbooks.com User , 15 years ago
Although this book is about teenagers, it is for any age group. I am a thirty year old mom, and I found it riveting. The plot is fresh and unlike anything I've seen. It follows the story of two teens killed in a car wreck and I couldn't put it down. It is everything a good fiction book should be and it even has a little romance! I have bought several copies of this book and have given it to three different age groups (grandma, single-something, and young teenager) and all have enjoyed it.

Published by Thriftbooks.com User , 16 years ago
Nick and Allie never would have met had their parents' cars not collided on a hairpin turn one day. If only Nick's parents had not hit a piece of steel lying in the road which caused them to blow a tire and head into the oncoming lane of traffic directly in the path of Allie's father. The accident happened so fast neither felt any pain. The only recollection they have is landing on the ground in the woods and feeling very tired. What happens to children when they get knocked off track on their "way to where they are going?" Neal Shusterman has created the Everlost. A place where children end up if they get thrown off track on their way through the tunnel of light. When Nick and Allie landed in Everlost they slept for nine months before waking up. They were greeted by an eleven-year-old boy named Lief. Lief had been in the forest for a very long time; so long, in fact, he didn't actually remember his name. He made one up when the two asked him what it was. When you are in Everlost, you are considered an Afterlight. You have a slight glow about you all the time and you have to be very careful where you walk. You are only safe on things or places that have crossed over to Everlost. Otherwise the Afterlight will sink into the ground and go straight to the middle of the Earth and wait there until the end of time. Nick and Allie had to learn the tricks to living in Everlost pretty quickly if they wanted to stay aboveground. They had to get used to walking amongst the living and the feeling of things passing through them. Not knowing what else to do, Allie and Nick decided to go home and Lief decided to go with them since he hadn't left the forest in about a hundred years. They fashioned "snow shoes" to make it easier to walk on the ground so they wouldn't sink. When they got as far as New York, they found quite a surprise. Standing in the distance, glowing with the radiance of an Afterlight, stood the Twin Towers. They would forever stand in the Everlost because of the terrible tragedy that took place on 9-11-2001. There they met a large group of children living there and being cared for by a young lady named Mary Hightower. Mary Hightower considered herself the authority of all things in Everlost. She authored many books on different subjects in order to assist new Afterlights in making the transition from the living world. Nick and Allie had different opinions of Mary. Nick almost immediately fell in love with her; Allie considered most of the things she said malarkey. Eventually, Allie decided to go her own way and convinced Nick and Lief to come with her. It didn't turn out to be a very good idea. While they were searching for someone they thought might be able to teach them new skills to use, they met with some mean people. Nick and Lief were sealed in old pickle barrels that were still filled with the brine and then taken prisoner by the monster of Everlost, the McGill. After some clever thinking on Allie's part and Mary showing up in the
Trustpilot
Copyright © 2022 Thriftbooks.com Terms of Use | Privacy Policy | Do Not Sell or Share My Personal Information | Accessibility Statement
ThriftBooks® and the ThriftBooks® logo are registered trademarks of Thrift Books Global, LLC