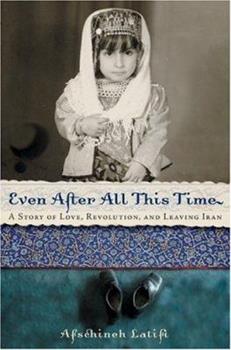 Even After All This Time: A Story of Love, Revolution, and Leaving Iran

At the age of ten, a young Iranian girl witnesses the horror of her father's execution and escapes the revolution with her sister. Growing up in Tehran in the 1970s, Afschineh Latifi and her sister and two brothers enjoyed a life of luxury and privilege. Their father, a self-made man, had worked his way up from nothing to become a colonel in the Shah's army, and their mother, a woman of equally modest roots, had made a career for herself as a respected...

Published by Thriftbooks.com User , 16 years ago
I just finished this book and loved it. If you like reading about different culture and enjoy non-fiction this is the perfect book for you. Its true, sometimes the author's admission of crying over clothes and Barbies is shocking - but I see it as admission of truth and lack of understanding. The author isn't patting herself on the back for these traits - but showing the reader how, as a child, she didn't fully comprehend the gravity of her family's situation. She was not careless and selfish individual, but a confused and frightened child.

A family's determination and love for one another prevails

Published by Thriftbooks.com User , 17 years ago
In the spring of 1979 when Latifi was only 10, her father, a colonel in the Shah's army was executed for crimes against the state by Khomeni loyalists. The author begins her story with the cold facts of her father's haphazard imprisonment, quick trial and summary execution. Life had been getting progressively worse in the months leading up to the Islamic revolution, and what makes Colonel Latifi's death doubly tragic is the fact that he likely could have fled the country with his family, as many others in the middle and upper classes did at that time. The elder Latifi never stopped believing that he had a duty to his country, and so he stayed. The death of the family patriarch preceeds a long battle for his widow to get her children out of Iran, however she could, and to safety. As radical Islam gains a stronghold over the land, it becomes increasingly difficult for her to raise her family and continue her own work as a teacher, which she refuses to give up. She enrolls Afschineh and her elder sister Asfaneh to a private school in Austria, where they can pursue their studies free from the extremism that has gripped their country. It would be years until the mother could secure visas for her two sons so that she could secret them out of Iran on the guise of a short family visit in the United States. The Latifi mother is a driven woman who is convinced that all four of her children will become doctors. During the daughters' difficult years of estrangement from their Persian relations, she advises them in weekly telephone calls with the words of her husband: "You are the daughter of a soldier", she says, to steel their resolve. When the Latifi girls finally make it to America, they stay with their uncle in Virginia. The arrangement is strained from the beginning. Eventually, they declare their independence from this situation and get an apartment together, where they work their way through school. The young women often work multiple jobs in order to make enough money to pay the modest rent, and to have something left to send to their mother, who is mightily struggling back home. Young Afschineh comes across as demanding and self-centered on a number of occasions, but she is forthcoming about her faults. To her credit, not only is she a young girl, but she had to endure her father's untimely death, followed by her fall from a comfortable upper-middle class lifestyle and life in a foreign land in which she knows no one. The story reaches a climax with the author's return to her native land some 15 years after she left to pursue her education, as she struggles to remember the place where she grew up. Even After All This Time is a gripping memoir of a young girl who is torn between two worlds. This aspect of the book reminded me of Barack Obama's memoir, Dreams from my Father. Her family's determination and love for one another is what keeps them together and ultimately saves them all. It is truly a beautiful story of survival and hope.

A Story with Several Lessons

Published by Thriftbooks.com User , 17 years ago
I see this book as two or perhaps three in one. On the one hand it is the story of a family torn apart by the execution of the father (convicted of commiting murder on the day he was in a hospital far away). The author was a young girl of ten at that time. This is the story of her life after her fathers arrest and execution. Obviously well to do at the time, the two daughters were sent to school in Austria, and finally to an uncle in America. As part of this, I am reminded that when people move to the United States, they often become the best, most capable citizens we have. In this family of four children there are two doctors and two lawyers. Often, usually, the people who leave a country are the best people that that country has. Our country is benefitted by their being here. Finally, this is the story of how an Islamic government moving into power. At one time the author's mother is showing hospital records to the jailer, and is told that it doesn't matter what proof she has, the decision stands and he will be executed. Not too different, I guess, than the Khmer Rouge in Cambodia, but a pretty rough way to life. And this is what people say they want???

Published by Thriftbooks.com User , 17 years ago
Another reviewer savagely and unfairly attacks this quietly powerful book by saying that everyone suffered in the Iranian revolution and therefore the book author must learn to deal with her tragedy. Strangely, this bitter reviewer does not mention that the author's father was executed and that this regime is by far more cruel and inhumane than what the Shah was ever even accused of being. The reviewer's bizarre obsession with the CIA-supported coup in the 1950's shows an unhealthy complex of reality avoidance. Get over it--what happened 50 years ago has little to do with Mullah's trampling of human rights today. Talk about weird nostalgia--if one were to accept the reviewer's tortured argument, then every execution in Iran is preceded by a salute to Mossadegh's unattractive portrait. The simple reality is that political simpletons such as the CIA-obsessed reviewer were naive participants in a revolution that succeeded in killing innocent Iranians, and destroying a generation of hopes with war, religious fanaticism and repression. Now that the simpletons have seen their mistake, they revert to the old favorite of blaming the CIA! You might as well blame the Mongols too---no one ever fully recovered from their rampage and they were possibly under the direct control of the CIA Ulan Bator station. This book is a personal story with facts that are sadly so true. Let the author tell her story in dignity and give her the respect that she has earned. Her tragic history in Iran is no less real than what she ways.

Published by Thriftbooks.com User , 17 years ago
A deeply moving story about a family struggling long and hard to rebuild in America after their lives are shattered by war. Powerful, haunting stuff, punctuated by moments of great levity and humor. And not an ounce of self-pity anywhere! In writing this book, the author pays homage to her remarkable mother, and comes across as a a pretty remarkable woman herself. Highly recommended.
Trustpilot
Copyright © 2022 Thriftbooks.com Terms of Use | Privacy Policy | Do Not Sell My Personal Information | Cookie Preferences | Accessibility Statement
ThriftBooks® and the ThriftBooks® logo are registered trademarks of Thrift Books Global, LLC